The next-generation Sparky has arrived with mixed reviews to put it very, very gently.

For many years and in all his forms, Sparky has been one of the coolest and most unique characters in all of College Football (and Athletics). He is a significant part of ASU’s presence both locally and nationally. He also plays a big role in university copyright revenue & merchandising. Additionally, Sparky is a part of our identity within the very-competitive and lucrative world of College Athletics.

The Sun Devil mascot has changed & evolved more than a dozen times since his first appearance 63 years ago. Athletics Director Steve Patterson and the ASU Product & Branding Design School collaborated with Disney to continue that evolution in order to grow the Sun Devil Athletics brand and reach “new audiences”. At a press event on Friday, they unveiled ASU’s newest installment of Sparky the Sun Devil. Before Sparky crashed the party with the ASU band & cheer squad, Patterson made it clear that a big intention was to reach the younger market while maintaining a strong Sparky tradition. The new Sparky will be used is moving pictures and animation and even be featured in comic books and children’s materials. It’s never to soon to build a DieHard Sun Devil, right?

Since the news, a large & loud contingent of DieHard Sun Devil fans have expressed –again, framing this nicely– that they are not fans of the new look. To an outsider, this may seem trivial, but to a Sun Devil, this is important stuff. First & foremost, Sparky embodies Sun Devil tradition & pride to all fans. That includes young children, high-schoolers, undergrads, student-athletes and alumni from as far back as the 50’s and 60’s. Chances are that if you bleed Maroon & Gold, you can’t help but smile when Sparky shows up on the scene decked out in Sun Devil gear, throwing up forks and taking pictures with fired up fans.

SPARKY 2.0 is a Success for what seemed to be a clear MISSION. 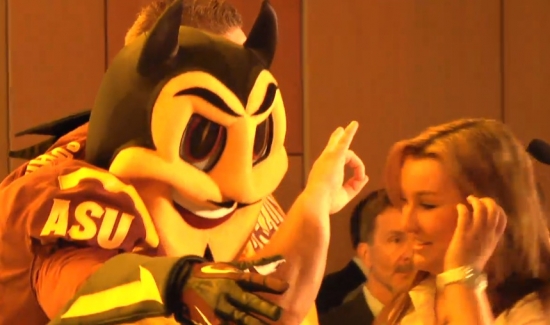 Some of the push-back from fans is simply due to the fact that there was little insight as to the goals that perpetuated the changes. In 2011, most fans knew before hand about big developments that were coming to ASU’s uniforms and logo. So in the case of Sparky, fans were less prepared to at least get into a mindset for changes. In reality, the friction that has occurred is because fans might not have agreed with the MISSION. Had there been more information disseminated by the Athletics Department before hand, the reaction certainly would have been a bit more tempered.

Now let’s take a look at the new Sparky and the more notable changes:

– Rebel to Role Model. First and foremost the somewhat rebellious & mischievous Sparky went away to charm school. Now he is a friendlier, lovable Sparky with a hint of role model.

– Windows to the Soul. Probably the most recognizable difference is in Sparky’s eyes. His round eye lids now have a squared opening with much bigger, deeper eyes which is intended to reflect friendliness. I think this change will be one of the hardest things for long-time fans to adjust to. Because there is very little white in the eyes and because they are so big & dark, it’s harder for fans to “connect” with the new Sparky when compared to his predecessor.

– Hard vs Soft. Because the new firmer mask has no elasticity, the previous Sparky’s devilish grin seemed to be more lively due to the cloth material.

– Go Black. In another change that plays off of ASU’s successful use of Black, Sparky’s maroon crown has been changed to black. 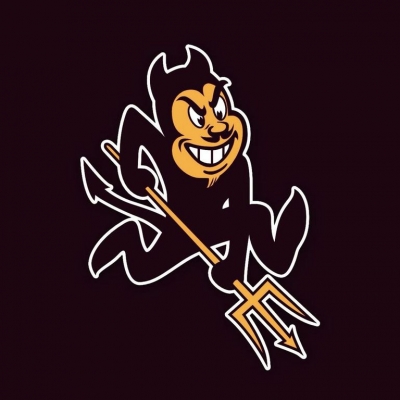 The official Sparky Logo lives on

There’s little doubt that the university wanted to make a significant change to Sparky’s character. He has been given a big shot of “super-hero”, which will make him more iconic…to kids. But what about the grown-ups? Therein lies the disconnect. If nothing else changes, I think it’s possible that re-designing Sparky’s eyes could bridge the gap while still remaining effective with the younger audience.

In the wake of this change, the Official Sparky logo lives on. ASU has maintained this mark since it was created by Disney artist, Bert Anthony, all the way back in 1946. He remains everywhere you see him on campus and around the valley.

To put this largely unpopular development into perspective, let’s rewind to just two years ago when ASU released the new Fork logo and Uniforms. Personally, I had a bit of a meltdown upon seeing the first renderings and the official presentation of the make-over. I really disliked the Fork, the fork-like design on the shoulders of the jerseys and generally the whole uniform concept. I could list off everything that was wrong with the new uniforms starting at the very top of the helmets where we were losing our single maroon stripe. At the time, it seemed that my beloved alma mater & juggernaut Nike blew a big opportunity and missed the “mark” by miles.

Then I cooled off and slept on it a few nights and then a few weeks. I can admit that sometime within that first couple months, I flipped and loved most of the changes that were made. As we all witnessed, the new Fork was quickly embraced by fans, and it has become an immediately recognizable, iconic look for Arizona State. It wasn’t long before the endless options and uniform combinations became popular with many Sun Devils. And when the team sprinted out of Tillman Tunnel and on to Kush Field in that first game, even some of the most critical “old-school” Devils responded positively to ASU’s tougher, faster look. Apparently the pros did in fact know exactly what they were doing. They had exceptional vision then did everything it took to make it real. It just took some of us longer to “buy in”. 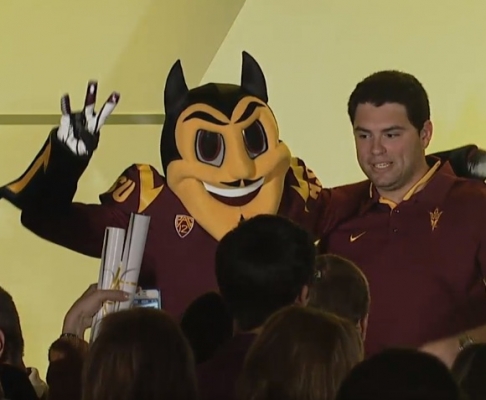 Hopefully most of us, even those who are campaigning to undo the change, will grow to become comfortable with this next-generation Sparky just like we did with the Sun Devil’s new Fork and Uniforms. Until then, it’s painful for a lot of supportive fans. Maybe the people in charge identified an important & valuable opportunity for ASU and it’s future. Maybe not. We’ll sleep on it.

In the meantime, we can all agree that playing hard-nosed Football and winning is infinitely more important to Sun Devil Nation.

ASU’s updated mascot will make his first public appearance in 15 weeks at ASU’s Spring Game which will be played Saturday, April 13 11:00 am at Sun Devil Stadium.

TALK ABOUT IN in DEVILINK