Tempe, AZ – The Duel in the Desert is upon us, and things just got a bit more meaningful after both programs had defining wins last week.

ASU clinched the Pac-12 South with its win against Ucla, and has a chance to host the Pac-12 championship game with a victory today. The Wildcats won big over Oregon, and will be looking to play spoiler to the Sun Devil hosting party. As if bragging rights in the state weren’t enough, now this game holds national rankings and Rose Bowl implications.

Above and beyond all of the moving parts for tonight’s game, our Diehard Storyline comes down to a pair of critical issues for the Devils to #KeepTheCup.

Offensively, ASU will be without its biggest weapon in RB Marion Grice who was injured at UCLA. D.J. Foster will attempt to match Grice’s production, both rushing and receiving out of the backfield.

A healthy dose of RB Deantre Lewis will be needed to manage the number of carries Foster gets between the tackles. It will also allow D.J. to line up in his customary slot position where he presents a tremendous match-up advantage for ASU. This game, more than any other, will require the offensive line to own the trenches to open up more space for Foster and Lewis.

Contain the 1-2 Punch of Carey & Denker

ASU’s “Hell’s Gate” defense will have its hands full containing running back Ka’Deem Carey. He is explosive out of the backfield, and the Wildcats will be relying on him heavily tonight. I foresee some new looks from the ASU front seven, including stacking the box and forcing QB BJ Denker to beat them with his arm.

However, containing Denker in the pocket is no easy task. He is very prone to taking off with the ball for yardage or throwing on the run. He also likes to roll out to the left side. The ASU “Bird Gang” defensive backs need to be cognizant of where the line of scrimmage is before leaving counterparts to stop Denker. To prevent explosive plays, better fundamental tackling than last week is a must tonight.

Forcing Denker to throw under duress and keeping him pinched in the pocket will go a long way in stalling the Wildcat offense. Fans can also expect to see some new wrinkles on UA’s offense from Coach Rich Rodriquez.

ASU’s defense has struggled with the run against opponents who lined up in double tight end formations. I wouldn’t be surprised to see the Wildcats try to replicate that and keep an extra blocker at the line of scrimmage to help against the attack-minded front seven of ASU. There will be a subtle chess match behind the scenes of what is sure to be another nasty brawl that has come to define this Territorial Cup series for decades.

Turnovers have historically been a huge factor in deciding the game winner in this rivalry. Momentum for either side can also carry a team to victory. Furthermore, special teams can be a significant factor since this game has been decided by a touchdown or less in the last four meetings.

Plenty of subplots will play out tonight at Sun Devil Stadium, and if the Devils can win the Cup twice in two years, they will also host Stanford on December 7, a development that gives ASU an added advantage to get to the promised land in Pasadena. 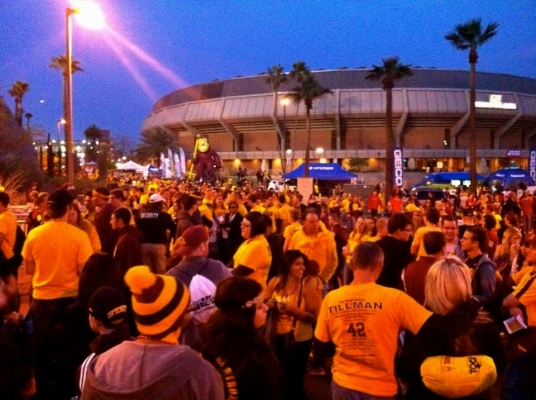 Sun Devil Athletics @TheSunDevils – A sea of gold to protect our territory and help keep the cup! #AZvsASU