The Oregon State Beavers stymied a questionable two-point conversion attempt by ASU with 1:40 remaining to play Saturday night. The Beavers defeated the Sun Devils 35-34 at Reser Stadium in Corvallis.

Trending downwards, Herm Edwards is now 7-9 against the Pac-12. His Arizona State Sun Devils dropped their 4th straight and now sit at 5-5 for the campaign. ASU is an embarrassing 2-5 in Conference this year and should have won 3 more in very manageable games.  Trending upwards, Oregon State improved to 5-5 and is 4-3 in The Conference of Champions.

Beaver QB Jake Luton threw for 288 yards and four touchdowns as Oregon State jumped out to a 35-21 lead before withstanding the Sun Devils’ comeback effort.  Oregon State’s defense came up with two second-half turnovers and a key stop on a 2-point conversion attempt where a Field Goal would have tied it. 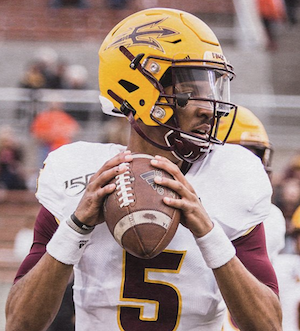 Success rates don’t favor 2-point attempts on the road when a chance to tie the game and go to overtime is the option. Every Fox Sports Studio Host was baffled by the decision. Personally, I didn’t like Herm Edwards’ body-language after letting the game slip away with the call.

With a win, ASU would have officially become bowl eligible for the second consecutive year under their second-year Head Coach.

All season we have heard the excuse of “youth” from Herm. So why not put your young Sun Devil team in the best position to win on the road and also garner 15 more practices for his underclassmen in December?

“We’re playing to win,” ASU coach Herm Edwards said of going for two. The truth is, Herm and his coaches have not been prepared these past several weeks. They’ve been quite conservative at that. Playing to win includes playing aggressively and dictating the game at every opportunity. 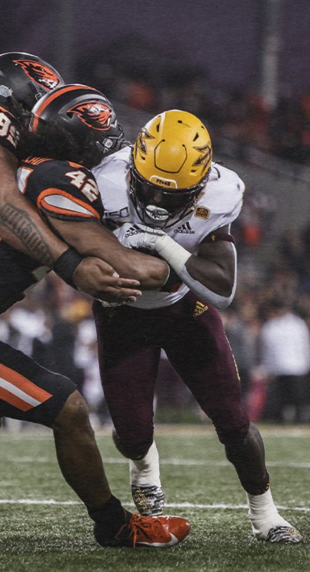 The Devils should have secured the extra point and “lived to play another down,” especially with No. 6 Oregon coming to Tempe next Saturday. The computers currently give ASU a 14.9% chance of pulling an upset against the Ducks.

The numbers simply never lie. Despite a recent flurry of fumbles including one last night that cost the Sun Devils 6-7 points, Eno Benjamin should have 20 or more prescribed rushes from the line of scrimmage. He had 15.

We’ve stressed repeatedly that Benjamin needed 25 rushes and 5 receptions, or it was going to be tough for ASU to win.  We also suggested using motion to get playmakers like Brandon Aiyuk and Kyle Williams runs to supplement the ground game of Eno and Jayden Daniels. OC Rob Likens delivered by running Williams downhill 4 times for 30 yards (7.5).

EB3 had 15 rushes for 70 yards (4.7) and 5 catches for 27 yards (5.4) against the Beavers. ASU was in a position to score the game-tying touchdown with 10 minutes left, but Benjamin fumbled at the one-yard line after a hit by Beaver Safety David Morris. The ball was recovered in the end zone by OSU Safety Jalen Moore for a touchback. The Sun Devils fumbled the ball 3 times and lost the rock twice. Still, the last thing you want to do to a young quarterback is abandon the run early and often. Continue to feed Eno who could have been a second-round NFL pick last Spring.

Arizona State missed a 2-point conversion on a horribly executed trick-play. The ball was given to Eno Benjamin who swung left with the option to cut in for a running score or pass it across the field to Jayden Daniels in a lopsided formation. OSU stayed disciplined and swarmed ENO out of the play. Later Rob Likens suggested the play was opposite of what ASU had run against UCLA.

With 42 seconds left and on 4th down-and-2 from ASU’s 44, Luton’s pass to Trevon Bradford was incomplete. But low and behold, ASU cornerback Jack Jones was called for pass interference to give the Beavers a first down to seal the victory.

We got a good one on @FS1! pic.twitter.com/NTyB67VMfH

After missing the USC game with an injury, Jayden Daniels started slowly against the Beavers. Then the freshman settled in to complete 24 of 36 passes for 334 yards and three touchdowns. Arizona State has two excellent Freshman Quarterback’s, but something has to change in game-planning and game management.

WR Brandon Aiyuk continued his impressive campaign with 10 catches for 173 yards and a score. Aiyuk had a huge 63-yard punt return for a touchdown to tie the game up 21-21 with 4 minutes remaining in the second quarter. In all Brandon Aiyuk exploded for 293 all-purpose yards on Saturday, and NFL Scouts are salivating.

WR Frank Darby continues to raise his game each week. Although he had limited targets last night, Darby had 3 catches for 66 yards and a touchdown.

The Sun Devils had 408 total yards of offense compared to 393 for the Beavers, who defeated ASU for the first time since 2014.

ASU opens as a 15.5 point underdog against Oregon on Saturday in Tempe.