Let your voice be heard – What grade would you give ASU for this decision to implement a Billboard campaign.

The message is simple: Stay true and come to ASU.

The university recently unveiled a new marketing campaign highlighting players like Adam Archuleta, Zach Miller, Todd Heap and D.J. Foster who played their high school football in Arizona and elected to stay in the state.

“We are highlighting DJ Foster in the first phase of this campaign, and he was a natural fit,” said senior associate athletic director for external relations Rocky Harris. “He is excited about being included in this campaign.”

In the bottom corner of the billboards is the hashtag #StayTrue2ASU which joins #Graham360 and #SpeakingVictory in ASU’s catchy social media repertoire and has had an immediate impact.

“The billboards drove over 1000 shares through social media in less than 48 hours,” Harris said. 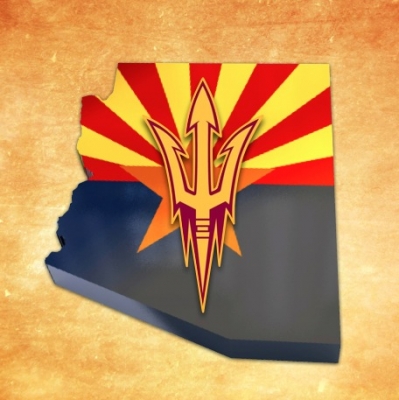 Featuring players with local roots like Archuleta, Miller and Foster highlights the real crux of the campaign, which is to make sure the best athletes in Arizona stay in the state. It’s the core of head coach Todd Graham’s recruiting plan.

“It is definitely important to keep the best talent in the state of Arizona in all sports and that is our focus. Coach Graham has made this a priority and it is important to our supporters too,” Harris said. “We need to build our program from the inside out.”

While the current phase of the campaign feature football players, in the future, it looks like it will more than likely involve other sports and different student athletes.