Menu
Another Night of Highlights Propels Sun Devil Basketball in 84-73 Win at UCLA
25
Jan
By Peter Bouloukos, DieHardDevil.com
January 25, 2019 1:29 PM
Follow Me     Follow DieHardDevilASU
Remy “Share the Sugar” Martin had his first career double-double, and Sun Devil Basketball beat UCLA at Pauley Pavilion for the first time since 2009. Martin had 11 assists with just 2 turnovers while scoring 13 of his 15 points in the second half to guide the Sun Devil victory.

All 11 of Remy Martin's assists vs UCLA in 60 seconds. pic.twitter.com/pIZbUYAiIR

In a game where UCLA scored the first 11 points and both teams combined for 32 turnovers, something was noticeably different about Arizona State.  Hurley sent in three subs “platoon style” just a minute or two into the game with both Taeshon Cherry and De’Quon Lake contributing. Cherry immediately hit a 24’11” three-pointer from Huntington Beach and Lake scored four quick points in the paint. Kimani Lawrence entered with swagger, was ready to play, and did so with great confidence.The Devil defense was outstanding. Arizona State seemed unfazed by their rough start and began to battle back. With an 18 – 9 UCLA lead, Bruins Guard Chris Wilkes flagrantly elbows Taeshon Cherry on a rebound. This essentially ends the game for Taeshon who only managed four minutes total.

After the foul, Cherry made one of two free throws but was visibly shaken by the blow to the face and had to leave the game. But an energy shift seemed to occur here, or at least a “light bulb” went off and the Devils started to compete. The body language of the Sun Devils had changed. I felt at this point ASU was not going to lose this game. Play by both teams was fast paced and at times erratic. 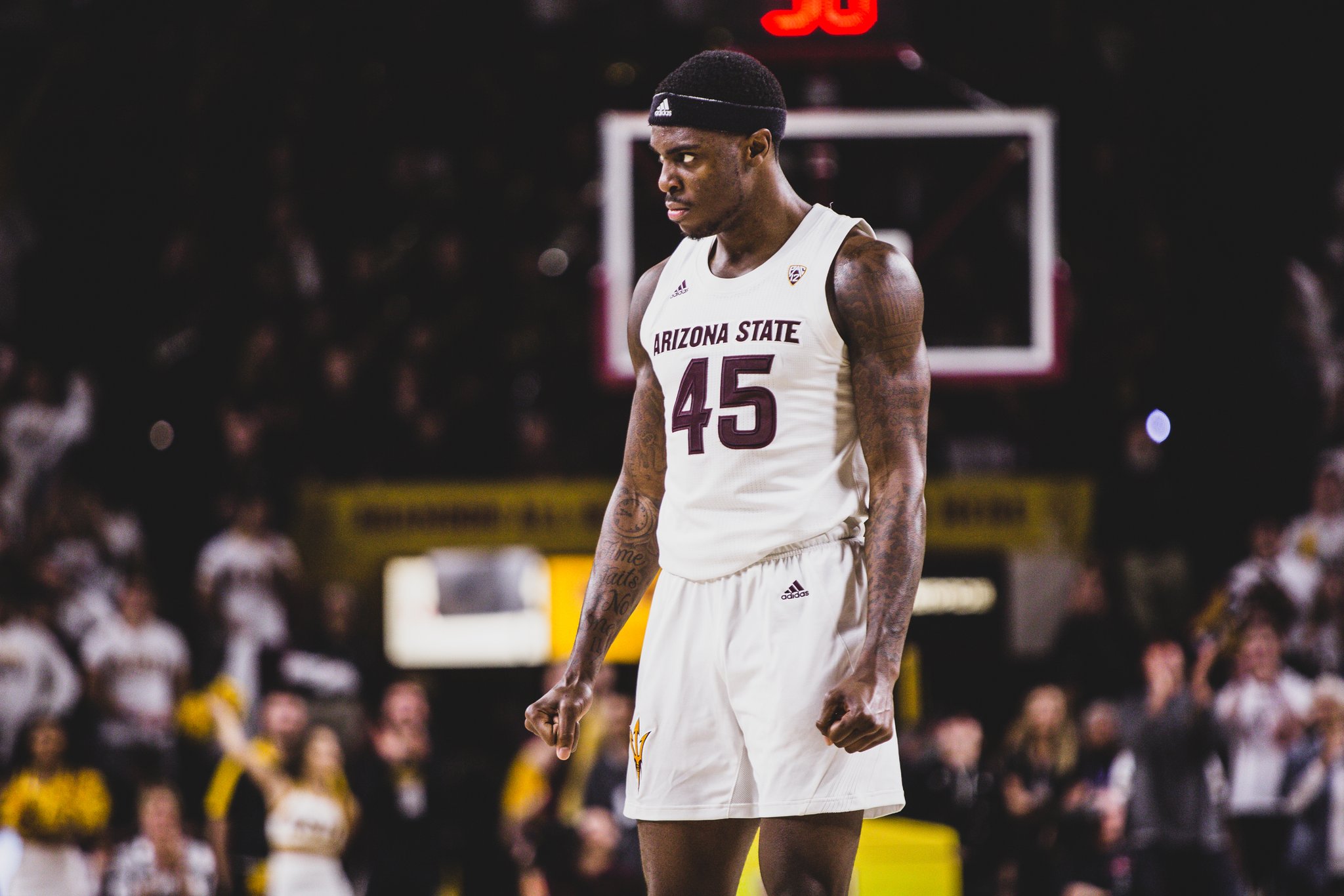 Entering the second half, the Sun Devil’s rallied behind the hot hand of Remy Martin. He made three 3-pointers in the first 8 minutes after half, finishing 3-9 from long range. The six misses were all ugly, but we will take it. “Share the Sugar” Martin seems to magically score at the right times, and tonight his effort was the difference. But most important was Remy’s passing game. He moved the ball well forcing the Bruins 2-3 zone to work hard. The tired legs may have played into UCLA’s horrible shooting later in the game.At the 15:31 mark of the second half, there had been 15 lead changes.  The Arizona State defense and rebounding was frustrating the Bruins at this point.  Both teams went scoreless for two minutes at the 11-minute mark. Arizona State had four turnovers on four possessions, and later in the game, the Bruins missed three shot attempts on one possession.

The Devils played nine deep and were by far the better-conditioned team.  Some mechanical issues with the game clock late in the game managed to provide the Sun Devil starters with additional rest. The game continued hovering around a 10 point margin for ASU, but make no mistake, UCLA was never going to win this game.

The Hayden underground library at ASU was probably louder than historic Pauley Pavilion for most of the night. Even when the game was going back and forth, the Sun Devils were relentless and took the home court advantage away from the Bruins. UCLA’s guards had to bring the ball up full court under some form of pressure all night.

The difference between Arizona State’s 17 turnovers as compared to the Bruins 15 was our beloved Devils continue to play out of control and put themselves into bad positions. They still get excited and force play, but on this night UCLA could not capitalize. Of the fifteen Bruin turnovers, it is my observation they were all direct results of consistent pressure by the entire Sun Devil squad.

Recall earlier in the evening Wilkes had a Flagrant One called for extending two elbows toward Taeshon Cherry. In the second half, Luguentz Dort was on a fast break and dished to a cutting Martin, all 5’11” of him. Remy with a powerful one-hand dunk on UCLA Bruin #23 Chris Wilkes. Remy, who has had some leg injuries this season, absolutely exploded to the rim on this play. Incredible!

Cheatham makes a beautiful pass to Luguentz Dort who threw down a two-hand jam on Chris Wilkes who was called for the foul. Dort then flexes, taunting the Bruin while he was on the floor. Both receive technical fouls, and Dort converts the free throw for a 3-point play. Regardless if Remy and Luguentz were making statement dunks on Wilkes to show support of Taeshon, tonight Arizona State came to play as a team.

Cheatham makes a beautiful pass to Luguentz Dort who threw down a two-hand jam on Chris Wilkes who was called for the foul. Dort then flexes, taunting the Bruin while he was on the floor. Both receive technical fouls, and Dort converts the free throw for a 3-point play. Regardless if Remy and Luguentz were making a statement in support of Taeshon, tonight Arizona State came to play as a team.

The Sun Devils shot 71.4 percent from the free throw line (15-21). This was a huge win for Bobby Hurley who was 8 – 21 in career Pac-12 road games until tonight at Pauley Pavilion.

The Arizona State Sun Devils (14 – 5; 5-2 Pac-12) moved into a second-place tie with the University of Arizona who were wiped off the floor by the USC Trojans (80-57) across town earlier in the night. Arizona State Men’s Basketball has now won three games in a row, and they are doing so with incredible effort and passionate defense.

Luguentz Dort had 16 points, played full-court defense, and caused trouble for the Bruin Point Guards. He ended up shooting 7-15 from the floor missing all five of his three-point attempts. He converted on three dunks, made some solid layups, and showed some control by attacking the rim and dishing out for what ended up being a Rob Edward’s three. Dort also collected himself in one transition and hit a soft 12-foot jumper tonight, something that will have a huge impact on his game down the road.

Kimani Lawrence showed up huge tonight. He just looked different, showing noticeable swagger while scoring 15 points on 4 – 10 shooting, five big rebounds, a steal and one assist. If Kimani starts playing to his inherent potential with confidence, we could make a huge run into the NCAA tournament. The Sun Devils need him. Imagine Lawrence and Cherry filling it up off the bench for meaningful minutes each night. It’s coming to a Pac-12 court soon my friends!

“Yes Sir” Zylan Cheatham was amazing once again. He had 20 rebounds, dished out 5 assists, had two steals, and was 4-6 shooting for the night. Zylan is a force! Most rebounds (most by a Sun Devil since Michael Batiste in 1997.

Up next for Sun Devil Men’s Basketball? A very talented USC Trojan team who dismantled those cats from Tucson last night. Watch Saturday at 6 pm MST on ESPN2. According to computer predictions, Arizona State currently has a 48 percent chance of winning on Saturday. I will take the Sun Devils plus whatever points they get (my guess is +2.5). ASU has the talent and tenacity to dominate the Trojans.