Las Vegas, NV – This was the basketball version of high octane offense. The Sun Devils came out free and loose with a chip on their shoulder and let it fly. This was a team backed into a corner and fighting for their lives. It took overtime, but Arizona State (21-11 / 9-9 Pac-12) knocked off the Stanford Cardinal (18-14 / 9-9 Pac-12) in the first round of the Pac-12 Tournament in Las Vegas, 89-88.

It was the Jahii Carson show on the strip in Vegas, LIVE at the MGM Grand. 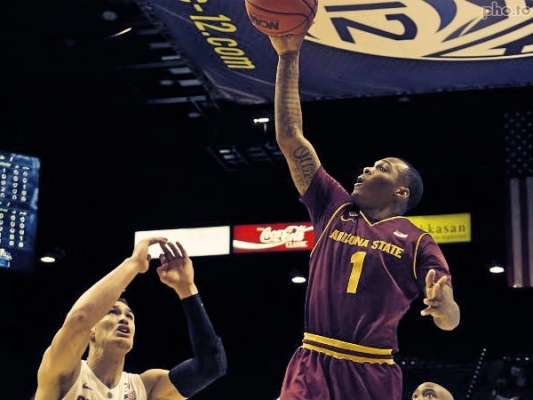 Team leader and freshman Pac-12 player of the year Jahii Carson scored 34 points in the victory.

In his first postseason game, Carson finished with a team leading 34 points, most of which came at the most urgent times. He literally “willed” his team to victory with a combination of aggressive drives, three pointers and one ridiculous, highlight film 360 spin move in the lane. However, Carson had some help. Senior Carrick Felix was also on fire adding 19 points and 12 rebounds for another double-double. Evan Gordon hit some clutch free throws down the stretch and finished with 16 points. Jonathan Gilling nailed four 3 pointers and finished with 14. Everyone showed up today ready to play…and win.

ASU had the game wrapped up with less than a minute left and a 4 point lead. Then the unthinkable happened. Stanford guard Aaron Bright hit a long three pointer and was fouled by Jonathan Gilling. Bright, who led the Cardinal in scoring with 27 points and six 3 pointers, hit the free throw and the game went to the extra period.

The Sun Devils didn’t back down or lose any confidence. Led by Carson, they finished off the Cardinal with focus and poise. Overall, this was an incredible game and a gutsy performance by ASU coming off a losing streak to end the regular season.  This team showed that they have plenty of fight and aren’t going away quietly. Credit to Herb Sendek, his staff and the players for stepping up in this first round game.

Next up, the Sun Devils advance to the second round to face top seed UCLA tomorrow in less than 24 hours at 12:06 PM (PST).