Menu
ASU Football: In the Win Over No. 15 Cal, the Young Sun Devils Are Proving It
3
Oct
By Peter Bouloukos, DieHardDevil.com
October 3, 2019 3:58 PM
Follow Me     Follow DieHardDevilASU
Until the ASU Game, Cal had held 11 straight opponents under 24 points, which was the longest active streak in the FBS since 2013.

September 27, 2019 –  The Arizona State Sun Devils traveled 675 miles to play undefeated #15 California just one week after dropping their first game of the season to Colorado in Tempe.

Eno Benjamin rushed for three-touchdowns against 15th ranked California, earning him the coveted Mandrake helmet and jersey awarded to the best player the week following each game. He was the first offensive player to win the honor this season. Benjamin had the go-ahead score in the fourth quarter as the Arizona State Sun Devils knocked off the undefeated Cal Golden Bears 24-17 in front of a raucous crowd in Berkely.

Eno Benjamin rushed for three-touchdowns against 15th ranked California, earning him the coveted Mandrake helmet and jersey awarded to the best player the week following each game. He was the first offensive player to win the honor this season. Benjamin had the go-ahead score in the fourth quarter as the Arizona State Sun Devils knocked off the undefeated Cal Golden Bears 24-17 in front of a raucous crowd in Berkely. Danny Gonzalez’s defense was stout holding Cal to just 11 total fourth-quarter yards. ASU forced a pair of turnovers on downs in the final five minutes to seal the deal and secure the second Sun Devil victory over a ranked road team this season.

Eno Benjamin finished at the Century Mark on the ground, his 11th career rushing game of 100 or more yards. EB3 had 31 touches, 29 on the ground, and 2 by air. Last week we suggested Benjamin needed more handles, and Daniels and Likens got him the rock often. Brandon Aiyuk added 120 all-purpose yards. Six Sun Devil Receivers had a reception for 12 yards or more, a good sign of things to come for ASU.

True Freshman Quarterback Jayden Daniels added 174 yards passing and 84 more on the ground playing with a bruised ankle. Unflappable, Daniels used his legs to convert on a few critical third-down plays. His decision-making and approach were impressive in the victory.

For a team filled with young players at key positions, Arizona State may stumble and get knocked down, but they simply have never quit under second-year Head Coach Herm Edwards.

The Quarterback position is the most preeminent in all of sport. No role comes with more prestige and likewise, more pressure. Folks, Jayden Daniels has displayed the poise and confidence of a general, and it seems FBS game-speed agrees with him.

Eno Benjamin scored his third touchdown of the game on a 3-yard run with 4:41 remaining in what was an old-school, helmet-to-helmet game.  “We’re just growing,” freshman quarterback Jayden Daniels said. “We like playing on the road. We like playing tough teams. We like being the underdog team. People doubt us. If you don’t believe in us, we believe in ourselves.”

ASU – Cal through the lens 📸🧐😈 pic.twitter.com/eDtdsElVk3

Friday night’s victory was ASU’s first win over Cal on the road since 2012.  “We knew it was going to be tough sledding, but we kept trying to run it,” coach Herm Edwards said. “We didn’t give up on it and eventually we punched it in.”

The Golden Bears (4-1, 1-1) lost their perfect record along with their starting QB Chase Garbers to a right shoulder injury.  Cal’s loss also left the Pac-12 without any undefeated teams before the end of September.  “They outplayed us in every facet of the game,” linebacker Evan Weaver said. “Can’t play very well and can’t win games when you’re not even making the simple plays, and we didn’t today. That was it.” 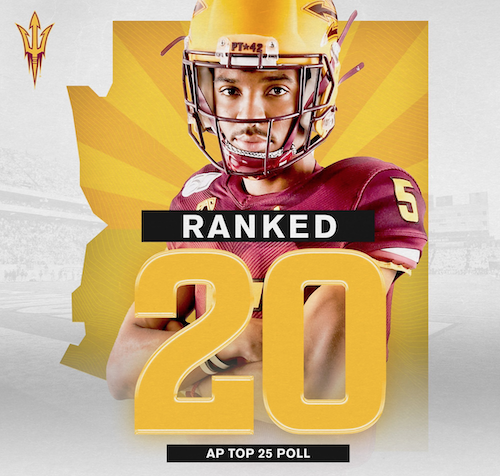 Garbers threw a 16-yard TD pass to Trevon Clark in the first quarter before leaving due to injury late in the second quarter when he fell on his shoulder and arm on a scramble. Garbers was in a splint on the sidelines for the rest of the game.

UCLA transfer Devon Modster replaced Garbers but struggled to move the ball through the air. In the third quarter, Cal executed a 12-play drive completely on the ground which was capped by a 1-yard TD run by Christopher Brown Jr.

The Bears then took a 17-14 lead when Joseph Ogunbanjo recovered a fumble by Daniels at the Arizona State 30. The Sun Devil defense gave up zero ground forcing Cal into a 47-yard field goal by Greg Thomas.

Then ASU answered with a 15-play, 75-yard drive capped by Benjamin’s third TD. The Maroon & Gold defense then forced a turnover on downs when Modster threw an incomplete pass on fourth-and-3 from the Cal 29. Cristian Zendejas kicked a 43-yard field goal to make it a seven-point game, 24-17.

#HBOSports will have a 10-man crew in Tempe from Sunday to Friday filming all facets of #ASUFootball including the preparation for Washington State. 🔱 Then on Saturday, there will be a crew of 19 filming the game at #SunDevilStadium. If you want ASU's fan base to shine in the HBO miniseries, spread the word now to get everyone in your Sun Devil circle-of-influence to the Game, a big contest at that. It's a 12:30 PM Kickoff, so make sure folks plan accordingly! #WeAreASU #SunDevilNation #DieHardSunDevilPride

The Sun Devils won despite squandering several scoring opportunities in the first half. Zendejas missed a 37-yard field goal after an effective drive and then a 50-yarder after a deflected punt gave Arizona State the ball at Cal’s 37.

Late in the half, Curtis Hodges dropped a pass when he was left alone in the middle of the field on a third-and-3 from the Cal 43, leading to an ASU punt.  Daniels overlooked a few wide-open receivers from the pocket when making the decision to run. Expect improvement here soon.

Cal struggled to generate anything in the passing game after Garbers got hurt, which doesn’t bode well for their future. In all, Modster finished 5 of 14 for 23 yards including an interception to Sun Devil Aashari Crosswell in the end zone at the end of the first half. Garbers was coming off his best game at Cal, throwing for 357 yards and four TDs in a win last week at Mississippi. Modster looked rusty, but DieHard Sun Devil Fans have to give this one to Danny Gonzales’ defense.

The Arizona State Sun Devils Football team is enjoying the BYE week at four wins and one loss. This 4-1 start is ASU’s first since 2016 and just the 10th time in the last 32 years. ASU hosts a well-coached and explosive Washington State Cougar team in Tempe on October 12, 2019. More to follow on that match-up…

STAYTRUE Apparel Co – Only a Sun Devil Knows the Feeling.

Coach Herm reflects on the Cal game as the team welcomes the bye-week.