The Sun Devils hit the road on Saturday and got their first taste of adversity in the new Todd Graham era.   Although they had two chances to pull out a victory in the fourth quarter, too many penalties, turnovers and miscues cost them in the end.  The game started out rough for ASU as they weren’t able to get much going on offense during the first quarter and a half of play.  Before you could blink, the Missouri Tigers took a quick 17-0 lead as they capitalized on some costly ASU turnovers.  The Sun Devils started to find their rhythm in the second quarter and put together a solid drive capped off by a 33 yard touchdown catch and run by DJ Foster.  The Sun Devils went to the locker room at halftime down 17-7. 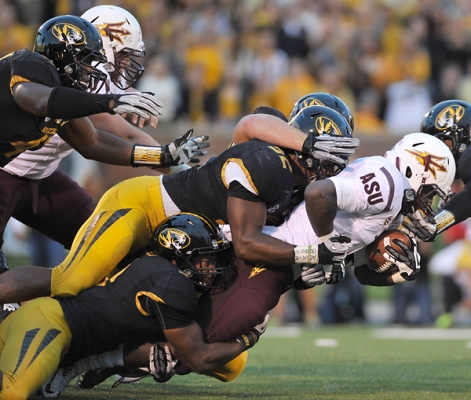 As the second half began, Missouri took the control and momentum back as they scored another touchdown to increase their lead to 24-7.  With their backs against the wall, the Sun Devils needed to make a big offensive push in the fourth quarter to make a run and have a chance at a victory.  With all the early game jitters and mistakes out of the way, ASU finally found a groove on offense and scored two touchdowns in the fourth quarter.  However, an extra point was missed due to a mishandled snap, and it would prove to be costly later in the game.  The Sun Devils kept up the offensive pressure and had two more chances to score late in the game, but couldn’t convert at the goal line on one possession, then ended the game with an interception to seal the win for Missouri 24-20.

Comprehensive Post-Game Analysis up next.