Menu
ASU Hoops: From Another Victory over St. Johns to a Sunday Tilt with #7 Virginia
24
Nov
By Peter Bouloukos, DieHardDevil.com
November 24, 2019 10:10 AM
Follow Me     Follow DieHardDevilASU 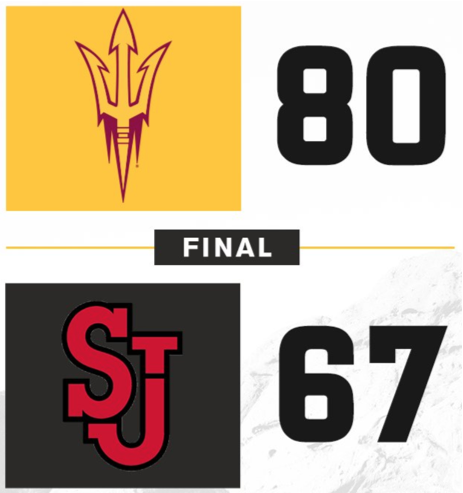 Romello White and Jaelen Graham were a perfect 8-8 from the field combining for 19-points, 13-rebounds, and 4-blocks while patrolling the paint against a physical St. John’s Red Storm.  Arizona State lost the battle on the boards. SJU enjoyed 17 second-chance shots but simply did not have the legs nor depth of ASU.

Like a crook, Freshman Jaelen House nabbed 3-steals in a truly gritty-gutty effort!  St. John’s turned the rock over 16-times. In a Sun Devil defensive frenzy, the Red Storm were throwing passes into the stands with the accuracy of San Diego Chargers QB Phillip Rivers in Mexico City on Monday Night.

Once again, Arizona State treated St. John’s like one would their little brother. St. John’s shot 37-percent from the field on 18-percent from distance.  Bobby Hurley continues to platoon athletes on and off the floor, and around the 12-minute mark, the game was over despite being close. 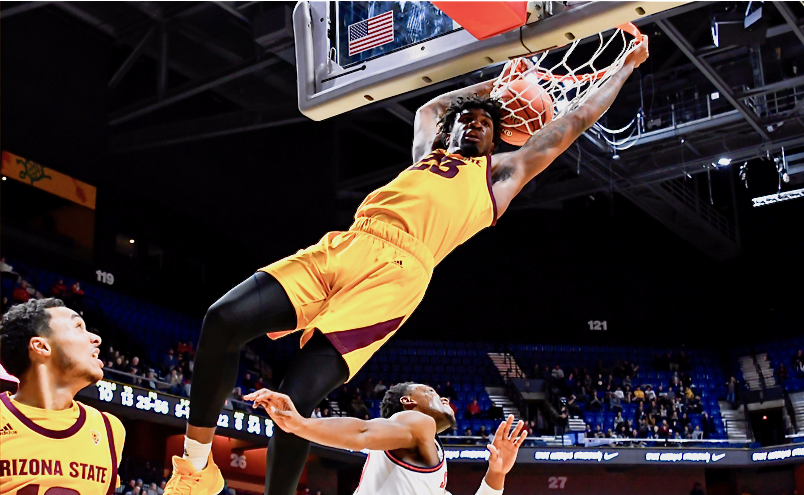 C Romello White with the slam

Arizona State advances in the tournament to play #7 Virginia Sunday

If you have been living with your head in the Sonoran sand for the last few years, the Virginia Cavaliers play defense. They won the National Championship last March 85-77 against Texas Tech, another defensive powerhouse holding tournament teams to Junior High School totals.  This year, Virginia has the 3rd most efficient defense in the nation, they are only allowing 41.2 points per contest. Again, 41.2.

Virginia brings a 7’1” center in Junior Jay Huff who is averaging 11-points per game, 32 rebounds, and 7 blocked shots.  The Cavs also have Senior 6’9” 230-pound Power Forward Mamadi Diakite with 33 boards, 4 blocks, and almost 16-points per contest.  They also start another big, but this time at Guard in 6’8” 225-pound Senior Braxton Kev out of Oak Hill Academy.  Dev is grabbing 8-boards and scoring 11 per game.

The height, size, and length goes on for Virginia…

5’10” 155-pound Sophomore Guard Kihei Clark can be as much of a “headache” as former Sun Devil fixer Stevin Smith.  The game is at the Mohegan Sun Casino. All jokes aside, Kihei is averaging 32.5 minutes per game and dishing assists like a Gourmet Chef plating $30 appetizers.

ARIZONA STATE has a great Defensive Efficiency Rating like VIRGINIA, as of Saturday right behind them at Number 4.  Arizona State also seems to now be playing 11-athletes even if one or two get in for a few minutes to spell a key player or two.  This was something DieHard Devil had been encouraging all last season! Let’s hope a heavy rotation of players continues against Virginia.

Virginia can’t shoot the rock outside of 10-feet.  Arizona State has two stout defenders on the block in Romello White and Jalen Graham.  Look for 6’9” Khalid Thomas, 6’9” Andre Allen and maybe even 6’10” John Olmsted to get some important minutes to clog-up the paint on Sunday.  Taeshon Cherry Could be a potent weapon on the block. St. John’s defended at 22’ which created problems for Arizona State most of the game.  Virginia is longer and far more disciplined than the Red Storm. Against another defensive powerhouse in Syracuse, Virginia only scored 48-points! Jimmy Boeheim’s Hall of Fame Zone is brutal.  But the Cavaliers held the Orange to just 34-points garnering a big win!

Don’t miss an EPIC challenge for this version of Bobby Hurley’s “Guard U.”