If I were to tell you Utah, a team known to take care of the ball, would turn it over 4 times against ASU, would you think Rob Likens offense would only produce 3 points?

If I were to tell you Utah’s star running back Zach Moss would be knocked out of the game in the first half, and Senior Quarterback Tyler Huntley would have to leave the field for a period of time, would you think Arizona State would be held scoreless in the first half while surrendering 14 points?

Defense back on the field looking for some more of these. pic.twitter.com/wVKJ0pluFO

The rain just kept falling at Rice-Eccles Stadium on Saturday Night, and the Sun Devils could not move the ball. Utah Coach Kyle Whittingham said, “I can’t remember a better defensive effort, certainly not as of late, it’s hard to win when you turn the ball over four times, but we found a way and that’s just another credit to our defense.”

When it mattered most, the Sun Devils would make emotional mistakes and 12 penalties for 122 yards was the difference-maker in Salt Lake City this time around. The 21-3 win over our the then No. 17 Sun Devils was hard to watch. 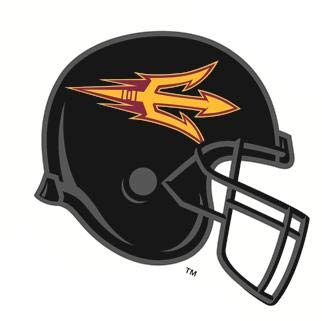 Danny Gonzalez’s defense was missing on arm-tackles and bouncing off Utes with poor head-down technique, but when it came to Zach Moss they were equal to the challenge for much of the game.

In the first half, the Sun Devil Defense had 6-penalties for 62 yards. “The penalties killed us and just got us out of whack a little bit,” said Senior Cornerback Kobe Williams.

Jayden Daniels carried the ball 16 times for just 8 total yards. To Daniels credit, he was only sacked 3 times, and Arizona State was only stopped behind the line of scrimmage 6 times against a dominant Utah D. Jayden had one interception in the “frenzied” offense, but that was a last-second hail-mary at the end of the first half.

On this front, Danny Gonzalez’s unit had 2 sacks and 9 tackles for a loss, something we were keying on in our pregame analysis. This defense is the real deal, but they can’t be on the field for 35 minutes at 4,637 feet above sea level.

Likens should apologize to Gonazales and to Eno Benjamin who was statistically on-pace to eclipse last seasons 27 carries for 175 yards and two touchdowns against the Utes. 15 Total touches for Benjamin was a travesty any way you look at this game, and I have now watched it three times. The ASU defense was visibly demoralized when Zach Moss broke through the line for a 32-yard touchdown run with 5:24 left.  Outside of that one touch, Moss rushed 24 times for only 67 yards.

Hear from former @Utah_Football punter, @TomCantHackett tonight on Inside Pac-12 Football at 6 PT / 7 MT on us! #Pac12FB pic.twitter.com/j6DUQTSuAo

Utah was one of just three teams in the country without an interception, but Arizona State’s Chase Lucas picked off Tyler Huntley’s pass returning it 21-yards to the Utah 28 in the third quarter.

Later, Tyler Johnson knocked the ball out of Tyler Huntley’s hands and Jermanyne Lole recovered it at the Utah 18.

All Arizona State had to do was stop Tyler Huntley and Zach Moss, and for the most part, outside of two-plays, they contained the two standout Seniors. The “bend don’t break” defense did its job.

As critical as I can be from time to time, this one was not on our true Freshman quarterback. You had better believe Jayden Daniels will rebound fast for a game at the Rose Bowl. 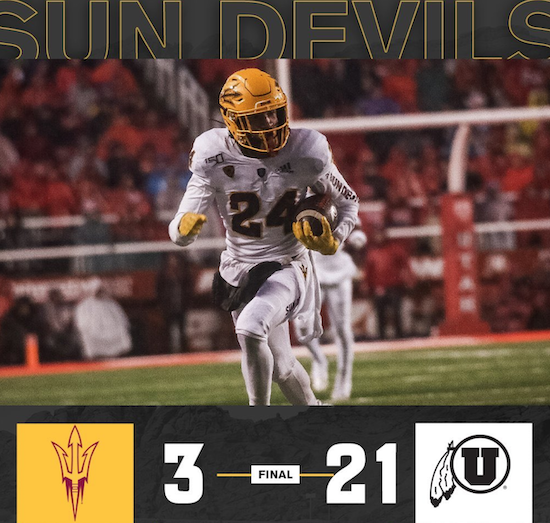 “I was embarrassed with our football team when it came to the fouls,” Edwards said. “We lost our composure and I don’t believe in doing that kind of stuff. It just mars the football game. I’ve never been involved in a game where a team got 12 fouls. For some reason, we just lost our composure.”

The Sun Devils return to action Saturday when they travel to Pasadena, California to face UCLA. Kickoff at the Rose Bowl is scheduled for 4:30 pm MST. ASU -4  Over/Under 54.5

LIVE: Coach @HermEdwards addresses the media prior to this Saturday's game at UCLA. https://t.co/sq0LmSdiRe