Los Angeles, CA – You could see the disgust and disappointment on the face of Jahii Carson when the final buzzer sounded. For a team fighting for their tournament lives, the Sun Devil basketball team came out completely flat and uninspired against USC at the Galen Center and lost 57-56. The loss puts a dagger in the hopes of ASU making the cut for March Madness, and they will now have to win the Pac-12 tournament to secure an invitation. Possible, but a tall order for a team that has lost 5 of its last 7 games. 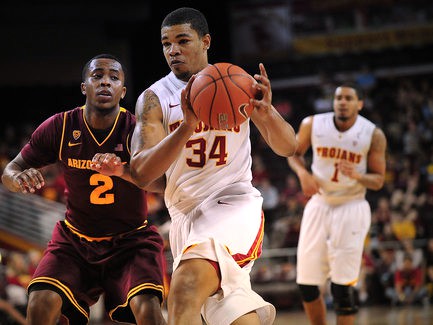 The entire team seemed to forget that the game tipped off at 1 PM (MST) as the Trojans took a commanding lead early, jumping ahead 24-7. The Sun Devils made a run to close out the first half and cut the lead to 11 points at the break and gained some momentum.

As the second half unfolded, USC kept hitting their shots, but ASU closed the gap with less than a minute to play. Although there was a bad call by the officials at the end on a USC shot clock violation, the Sun Devils had a final shot to win, but a Carson 3 pointer bounced off the rim.

Although he missed the last shot, sparkplug and team leader Carson led the Sun Devils with 23 points, 7 rebounds and 4 assists. Jordan Bachynski contributed 17 points in the paint and senior Chris Colvin hit some big shots for 10 points. Carrick Felix (4 points), Jonathan Gilling (2 points) and Evan Gordon (0 points) weren’t able to get going offensively. Surprisingly, Gordon has been scoreless for two straight games. Those numbers are a result of ASU shooting 1-13 from behind the arc (8.3%).

Maybe this team is just running out of gas at the end of the season. If that’s the case, they need to refill the tank for a big game at Arizona and a road trip to Vegas for the Pac-12 Tournament. If you’re looking for a sign of hope, the Sun Devils have shown all season that they can hang with any team in the conference, but still need to learn how to close out games.