The Sun Devils notched one of the biggest wins in school history Friday night, beating rival Arizona 69-66 in double overtime. Jahii Carson and Jermaine Marshall were magnificent down the stretch and have been essential to the success of Arizona State basketball this season. The duo provides consistent scoring in the backcourt, leadership, and the will to excel in a lengthy Pac-12 tournament run.

In addition to their excellent play, Jahii Carson and Jermaine Marshall have been killing the kicks game as well, sporting multiple Air Jordan models throughout the season. Here’s a sneaker spotlight from ASU’s “Tempe Twosome.” 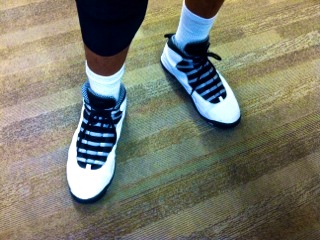 Though Jordan Bachynski and Jahii Carson received most of the national attention after ASU’s overtime upset, the most impressive Sun Devil was undoubtedly Jermaine Marshall. Marshall scored over half of the Sun Devil points and grabbed 5 boards in a black and white Jordan X (ten).

The Pac-12 player of the week has worn this model for most home games this year and also wore it on the road against Cal Berkeley and USC. He’s also sported some other Air Jordan retro’s, the Jordan XII and Jordan XIII in spots throughout the year. 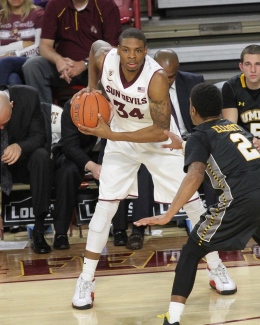 Jermaine Marshall in a White/Red Jordan XII (image by ecollegetimes.com)

“I like to keep it simple” said Marshall. “I like how light the X’s, XII’s and XIII’s are.” Marshall said he also likes the look and feel of wearing Jordans, something he didn’t get the chance to do in his four years at Penn State. “Wasn’t allowed, had to wear a team shoe. We get a little freedom here, so it’s nice.”

One Sun Devil that pushes that aforementioned “shoe freedom” to the limits is star guard Jahii Carson. The 5’10” dynamo has a shoe selection to match his versatile game, mixing several colorways across multiple Jordan models. Carson has rocked Jordan IX’s, X’s, XI’s, XII’s, and XIII’s as a Sun Devil, and even wore the Teal and Purple “Grape” Air Jordan V to media day.

“Really I try to just switch it up” Carson said. “Some games I feel like wearing a lighter shoe depending on what team and sometimes I just wanna wear something different.” Carson has certainly wore his share of “different” this season, wearing everything from red to black to brown during his sophomore season. 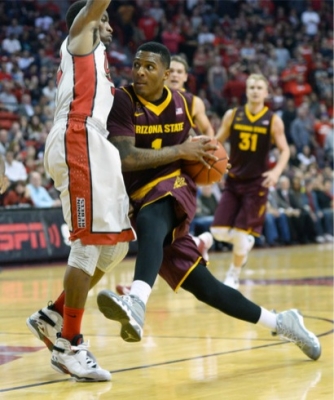 Though Carson loves to throw on different looks, the ASU star is loyal to a few Jordan models because of their light weight. A lighter shoe helps Carson maximize his speed and out-run other quick guards. “I try to stick to the same shoe, just different styles.”

Carson’s selections are based on feeling, weight and style. The Mesa High School product said recently he “really hasn’t even been caring about the jersey color.” He certainly hasn’t received any input from coach Herb Sendek, who began his coaching career at Central Catholic High School (Pittsburgh, PA) in 1984-85, the year the original Air Jordan I debuted. “Coach Herb doesn’t care. He just looks at them and says ‘that’s what you got on today? Okay.’”

If Carson and Marshall continue to play well, we could see several of these sweet Jordan retro’s go dancing in March. Hopefully the “Tempe Twosome” looks better in their J’s than the last time we saw the original Michael Jordan dance.

Hey Sun Devil-  If you like to WIN, join the Sun Devil Club. -DieHard Devil