Tempe, AZ – Last week with a Rose Bowl appearance on the line, ASU football turned in a forgettable performance in the Pac-12 Championship game against Stanford. As the record crowd of 72,542 slowly dissipated and the clock expired, the end of championship week was anything but fun. However, a happening called Camp Fargo the week of the game will shine on as a testament to the support from ASU’s student body. This is a very good sign, my fellow Sun Devils. 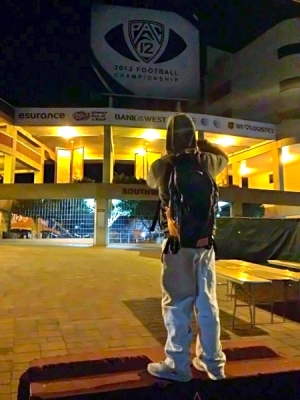 But for six long days, a growing crowd of Sun Devil undergrads braved the desert cold and camped outside Wells Fargo Arena. Each tent claimed a valuable spot in the long line for student tickets to the championship game. Because of the chilly temperatures and it’s location around the arena, it was appropriately named Camp Fargo.

There were special visitors also. Coach Todd Graham delivered donuts one morning, and ASU players tweeted support throughout the week. It was a meaningful showing from a student fan base grateful and appreciative of the terrific season the Devils turned in this year.

With all the buzz, I had to see for myself what Camp Fargo was all about. Little did I know what fun I would have.

My Journey to Camp Fargo

I arrived on the scene on Friday night, not knowing what was in store. Accompanied by a few good friends, but without a tent, I was beyond excited to arrive at the “campground.”  I had heard reports of the greatness unfolding down in Tempe all week, but due to finals preparation and my love for staying warm, I decided to only camp for the last night to get a taste of the action.

After exiting light rail, I stopped in the presence of the shining white fortress known as Sun Devil Stadium. Covered with “Pac-12 Football Championship” banners, the home of the Devils glowed in the surrounding darkness.

As we walked towards the arena, #CampFargo unfolded in front of us. We saw tents, and then more tents. And then tons of people. It was exhilarating to see the student fan support. Pride welled up inside of me, a smile spread across my face. There were Sun Devils camped all the way around Wells Fargo Arena, down the ramps and out onto the side walk. It was a scene that begged exploring. So I set off into the night wearing three layers of sweatshirts and two beanies in an effort to combat the cold. 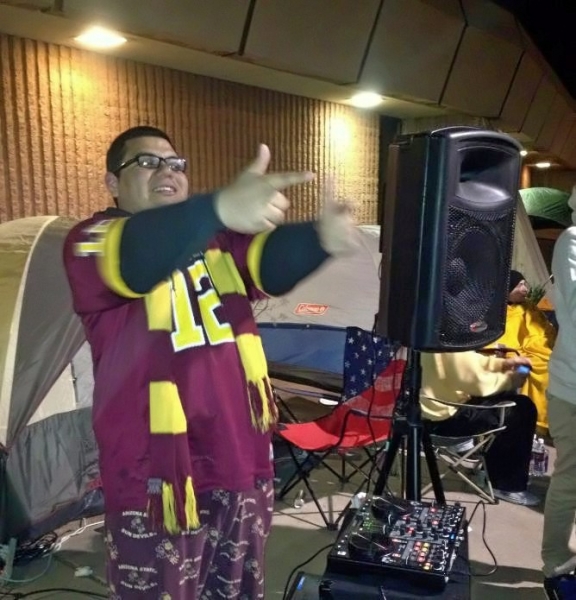 I began my journey with those who had camped out the longest. At the very front of the line was an area containing multiple tents and fenced off with metal barriers. I soon learned that this was the temporary home of ASU students Matt Cowan, Neca Aguilar, and Mike Smith, among others.

This was by far the most sophisticated setup I saw at Camp Fargo. It was the product of 6 days of camping. Forty students took turns holding down the fort. The area also featured numerous camping chairs, and even a TV and Xbox set up with the NBA 2K game.

The campers were kind enough to let me know a little about their Camp Fargo experience. They told me the best part was the sense of community and meeting new people.

To cope with the early morning media attention that was arriving daily, they posted a sign requesting specific Starbucks orders in exchange for interviews. It was a smart move that generated some mochas and lattes. 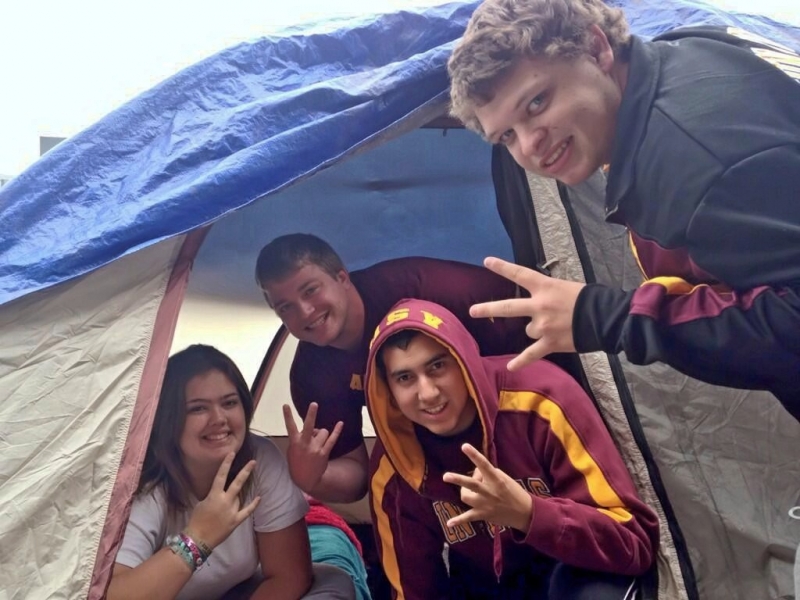 I continued my tour and found a group of Sun Devils singing and dancing around DJ Jesus Castillo Jr. DJ Jesus, clad in a retro maroon ASU football jersey, said he thought that bringing his turn tables out “would be a fun idea” to keep everyone entertained. As a crowd formed in front of his makeshift booth, he told me he was taking requests and that he was having a great time. I requested some classic west coast rap and joined the party. 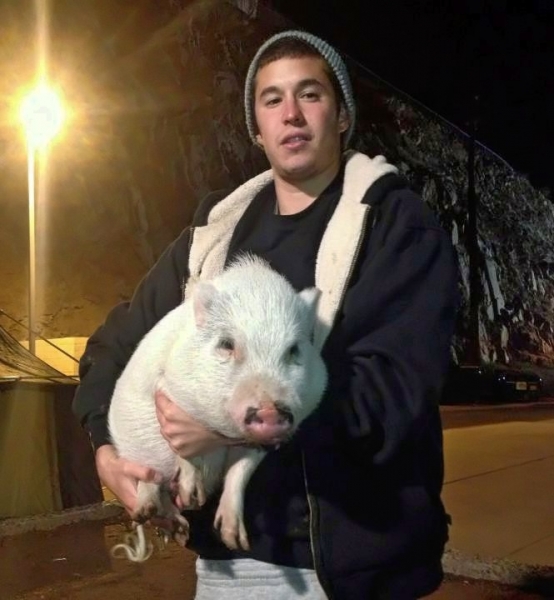 The next morning after visiting with more students I decided to end my reporting, until I saw the best looking farm animal in all of Tempe, the Camp Fargo pig.

While many claimed ownership of the pig, I was able to talk to one student who told me how they got the animal into camp. “We pushed him in a shopping cart for 2 miles. It was a rough trip.” The pig was the celebrity of the evening, receiving attention from plenty of DieHard Sun Devil fans.

From the bitter cold and hopeful atmosphere to the bumpin’ beats and divine swine, Camp Fargo was an unforgettable experience. Maybe next year our Sun Devils can bring home the bacon.

A look back of some of the Camp Fargo Tweets 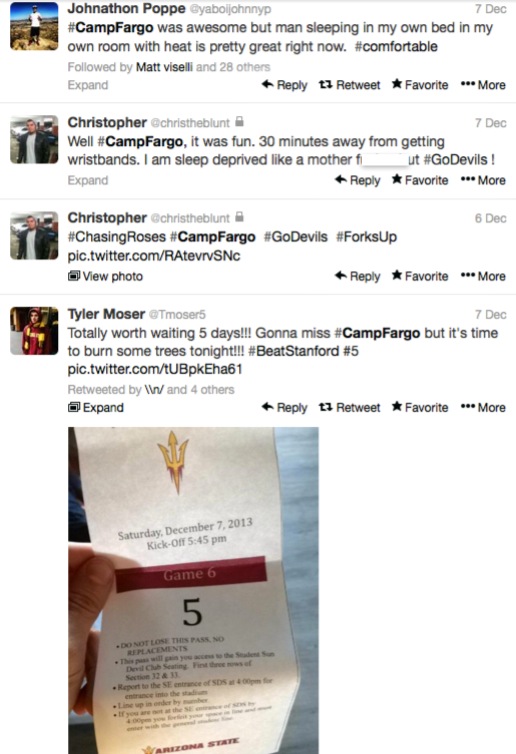 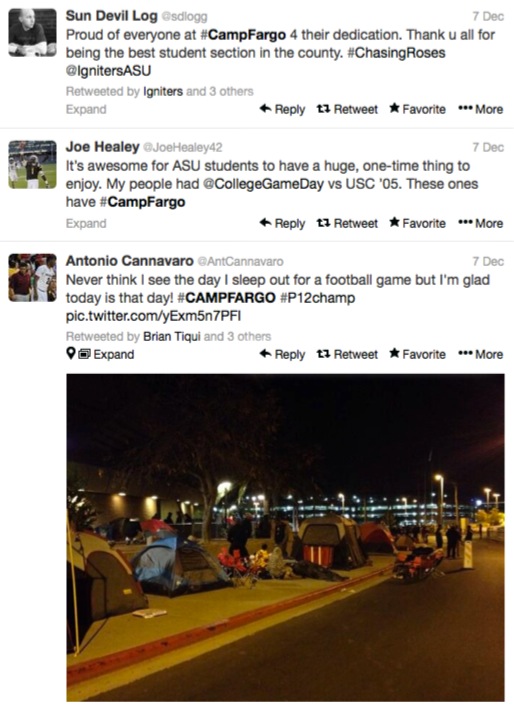 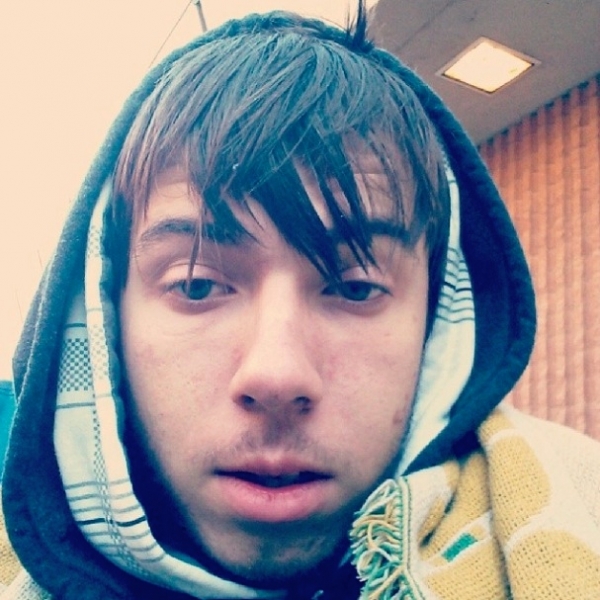