The Flight Plan? Give Jayden Daniels the rock and let him be Jayden Daniels. The Sun Devils took it 75 yards in 10 plays with just over two minutes remaining on the clock last Saturday. Then, with just 34 seconds left, Jayden Daniels scampered 17-yards helicoptering across the plane for a touchdown giving No. 18 Arizona State the 38-34 win over Washington State.  It was Daniel’s third game-winning drive in his six-game career.

“In big moments it doesn’t get him flustered, he just continues to play,” said Coach Herm Edwards, now 6-2 in games decided by four points or less since arriving at ASU. “He’ll probably tell you he made some throws he’d like to take back. Three touchdowns is pretty good, and he ran for about 41 yards and the big one was for the score.” 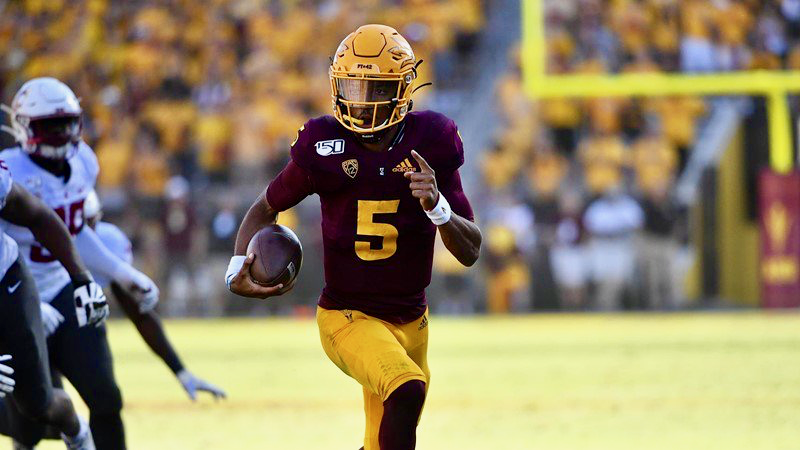 Jayden Daniels threw for a career-high 363 passing yards (26-36 / 84.7 QBR) and recorded a career-high four total touchdowns. When the Cougars air-raid offense made a play, Daniels, calm, cool and collected responded.  Eight Sun Devils made catches and six had gains of 10 yards or more with Brandon Aiyuk scoring on an 86 yard strike.

“I’ve been saying that since day one,” said Eno Benjamin. “We stepped in here knowing what the situation was going to be, and no one panicked. We knew we were going to have a Freshman at Quarterback. I say it all the time, the way he goes through practice, you would never be able to tell he’s a freshman, that’s really just a testament to him.”

MOST PASSING YARDS BY A SUN DEVIL FRESHMAN

Catch him and @ASUFootball back in action this Saturday at 3 PT / 4 MT on us as the Sun Devils trek to Utah. #Pac12FB pic.twitter.com/c6fNERV9tj

All five of Brandon Aiyuk’s touchdown receptions in 2019 have been for more than 30 yards, including a 33-yard touchdown early in the fourth quarter that tied things at 31. In his career-high receiving day, Brandon eclipsed 1,000 receiving yards in his second year as a Sun Devil standing at a total of 1,125. Aiyuk’s 28.0 yard per-catch average was the highest single-game per-catch average of a Sun Devil recording seven catches in a game, eclipsing N’Keal Harry’s previous record of 24.3 in 2017.

We also suggested to look for the Cougars Yards per Catch (7.3) and Sun Devil tackles for a loss (4), and both played into the 38-34 Arizona State Victory.  Danny Gonzales’ defense created an umbrella forcing the Cougars into short passes, long drives and twenty incompletions on 12 pass break-ups in space. Kudos to Coach Gonzales for being patient and to all of the defensive coaches for the discipline displayed by the Sun Devils. Of the 63 tackles made by Arizona State, 47 were solo.

The Arizona State Offense finished the first quarter with 0 points and just 23 yards total.  It was no secret the Sun Devils would have to score more than their 22.8 points average on Saturday afternoon.

On social media, fanatics were calling for more blitzing and rushing more players with little concept of whom Anthony Gordon and Mike Leach are!  After the loss, the Cougars still have the 7th best scoring-offense in College Football.  Senior signal-caller Anthony Gordon has 296 passing attempts with a completion rate of 71 percent.  Gordon leads the country in attempts, completions, total yards and touchdown passes.  Washington State is tough despite their underwhelming record.

Enter Defensive Coordinator Danny Gonzalez and Linebacker Coach Antonio Pierce who at times used just two down linemen with smaller, faster defensive backs and linebackers behind them to contain the Cougar attack. Blitzing a quarterback like Gordon who gets the ball out of his hands in less than a second from a shotgun snap six yards behind the line of scrimmage is far less effective than dealing with common pocket passers.  ASU’s true “pressure” was applied by Sun Devil speed in space. 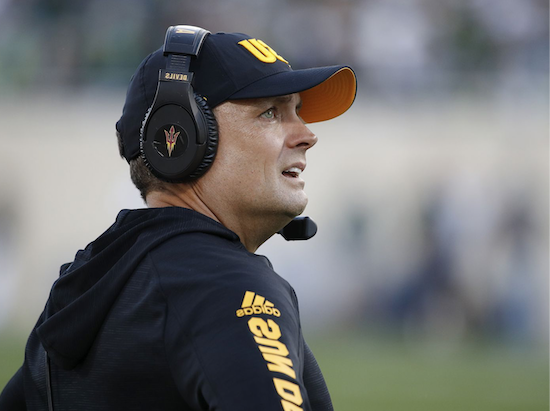 The Air-Raid Offense is about exploiting space, making calls at the line of scrimmage based on what the Quarterback can see.  It also affords receivers and backs to make cuts based on their reads, something that helped Cougar Easop Winston Jr. snag 14 receptions for 118 yards and a touchdown. 6’4” 235-pound Dezmon Patton came up big when it counted averaging 16.2 yards per catch against the Arizona State secondary on six receptions.

The Sun Devils gave up some big plays on slants when just one defender was a step or two slow or completely out of place.  One missed coverage early, and one roughing the passer penalty by Arizona State surrendered 14 points to the Cougars. But Arizona State won.

Gonzalez and his staff got this match-up absolutely right. Recall Arizona State’s defense limited the damage of a late shanked Michael Turk punt, holding Washington State to a field goal and a three-point lead which in-turn led to the winning touchdown drive by Jayden Daniels.

Eno Benjamin is playing with more confidence each game. He looks comfortable and understands how important he is. He ran with purpose, pounding gaps with thunderous strides as Cougar defenders bounced off of him. 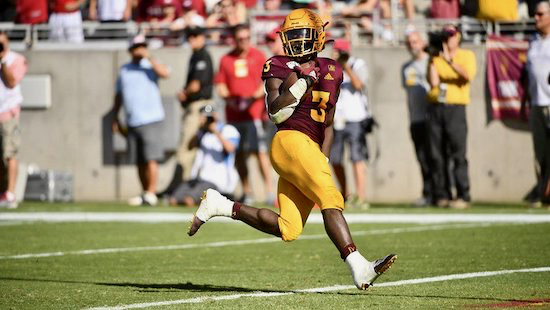 Coming off a 3-touchdown game against Colorado, EB3 averaged 7.2 yards per carry showing off the burst that helped him finish 5th in the FBS in rushing yards in 2018. Benjamin has 529 yards and seven touchdowns on the ground and 185 receiving in six games this year (714 all-purpose yards). What he is doing even without the ball is priceless for this young Sun Devil squad.

Per Sun Devil Athletics, Jayden Daniels passed for a career-high 363 yards (fifth-most by a freshman in school history) and three touchdowns (with no turnovers), completed 72 percent of his passes (26-36) and led his third fourth-quarter comeback in Saturday’s win. He also ran for 23 yards.

The freshman phenom connected with senior wide receiver and Pac-12 Offensive Player of the Week Brandon Aiyuk for touchdown strikes of 40, 86 and 33 yards. The 86-yard score was the eighth-longest passing play in school history. On the game-winning drive, Daniels accounted for all 75 yards, completing 7-of-9 passes for 58 yards and running 17 yards for the epic winning score.

For the 𝐓𝐇𝐈𝐑𝐃 time, @JayD__5 is the Pac-12 Freshman of the Week 😈 🔱 pic.twitter.com/aFTFJcVG3x

The 17th ranked Arizona State Sun Devils play the 14th ranked University of Utah Utes Saturday October 19th, 2019 in what should be an epic defensive match-up and war of attrition in Salt Lake City, Utah.  Kick-off is slated for 3pm MST and airing on the Pac-12 Network. 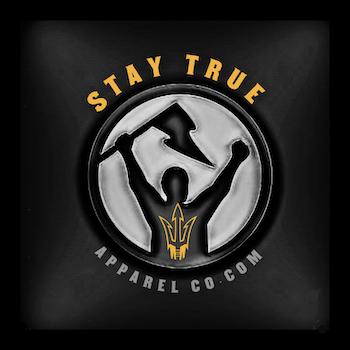 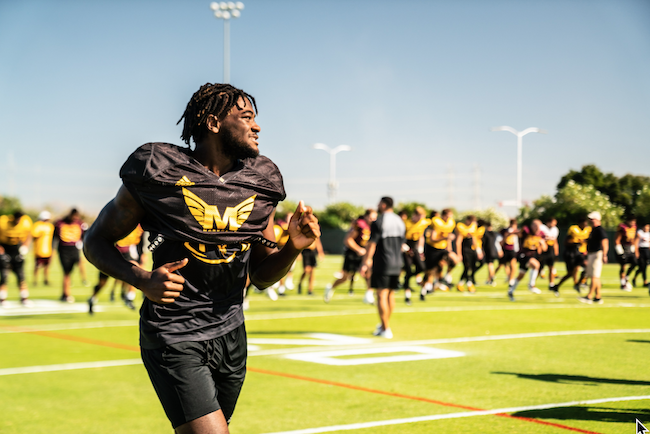 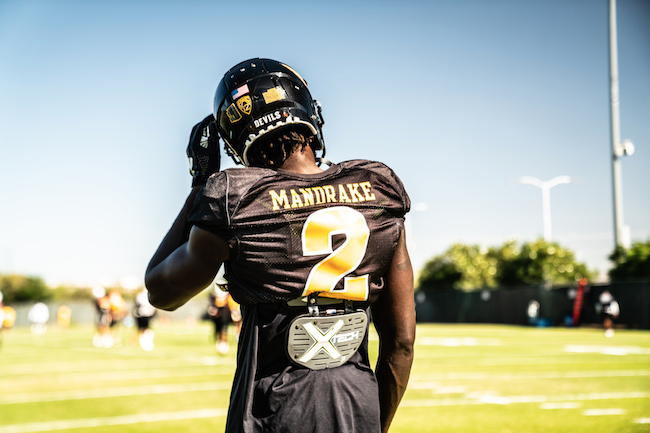