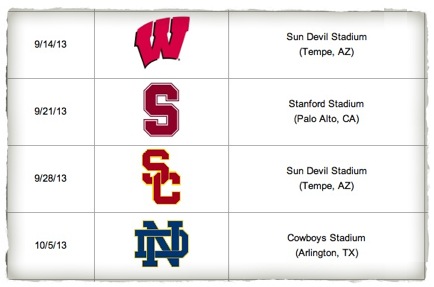 On September 14, ASU enters the gauntlet of their schedule at home vs. Wisconsin

As hype abounds the Sun Devils’ game in Dallas against Notre Dame on October 5, the game a week earlier has flown largely under the radar. It’s also the game with the most on the line for an ASU team with lofty expectations.

After a 2013 opener vs. Sacramento State, the Sun Devils enter the gauntlet of their schedule which includes four consecutive Saturdays against Wisconsin, Stanford, USC and Notre Dame. If you had to pick a must-win game for the Devils in that 4-game stretch, it has to be their home contest against USC.

Of those first 5 games, USC is the only team in the Pac-12 South Division, and an early loss to the Trojans could come back to haunt the Sun Devils at season’s end. The southern division is mostly a three-horse race between ASU, UCLA and SC.

An early win over USC at home could put the Sun Devils in control of their own destiny in the south. Beating Wisconsin, Stanford and Notre Dame do not offer quite the luxury.

Although wins over Notre Dame and Wisconsin look good on a resume they do nothing for ASU’s position in the Pac-12. By beating a likely top-3 Stanford, ASU’s respect would sky-rocket. Still, it would have no impact on getting the Sun Devils to the Conference Championship game since Stanford is in the North Division.

After USC, the Sun Devils have winnable Pac-12 South games with bottom dwelling Colorado and Utah before heading to UCLA. With an early win over the Trojans in their back pocket, the Sun Devils could arrive in Pasadena on November 23 at 3-0 in the south for what will become the most anticipated game of the season.

In addition to the momentum of a potential 3-0 record in the south, a win over the Bruins leaves ASU only a home game against Arizona to close their season.

Now, is 5-0 in the south a bold prediction? Yes. But it is possible. A single loss in the south doesn’t kill the Sun Devils’ Championship hopes, but losing to a talent-laden USC team could be a major setback.

By achieving five wins to start their year (includes opener against Sacramento State), ASU would very likely be ranked in the Top-10 nationally. 4-1 would be astounding and even 3-2 would be very good.

Even if they get off to a 2-3 start that includes a victory over SC, the Sun Devils will still be in the best position to achieve their goal as the South Division Champions who will play for a Rose Bowl birth.

Their is no doubt that Saturday, September 28, matters most in ASU’s first five games.