It was a record-setting debut for head coach Troy Taylor, who took over the Sacramento State Hornets after spending the past two seasons as offensive coordinator at Utah. Sacramento State, which finished 2-8 in 2018, is coming off of an impressive win against Southern Oregon University from the NAIA last week in which they scored 77 points and allowed only 19.

Sac State scored touchdowns on its first nine possessions and reached the end zone 11 times while breaking the school single-game scoring record of 76 points set against the University of San Francisco in 1968.  Sacramento State racked up touchdowns seemingly with each carry or completion, amassing 685 balanced yards against a team some of the nations Top-25 High School programs could also punish. The Hornets’ defense finished with 11 tackles-for-a-loss totaling 44 yards.

Honorary Captain Coach Plumbtree (Asst Coach '82-93 inducted into Sac State HOF) spoke to the team tonight and gave a very lively speech where he urged the Hornets to "believe in their preparation" and "avoid unforced errors" to beat the Sun Devils. #StingersUp #SacStateSwarm pic.twitter.com/ja6u2Ts55H

The Sacramento State Hornets are not going to over-power the Arizona State Sun Devils in week two.  But you are going to want to watch Quarterback Kevin Thomson who might connect a few times with Pierre Williams for some big plays. Hornet Coach Troy Taylor no doubt has put a target on our young Sun Devils all Spring and Summer long.

6’1” 210-Pound receiver Pierre Williams caught 3-touchdowns last week.  He is certainly capable after entering Sacramento State as a 2-Star recruit.  Simply stated, Arizona State is not going to let the Hornets play “pitch & catch” at any point under the Friday Night Lights in Tempe. 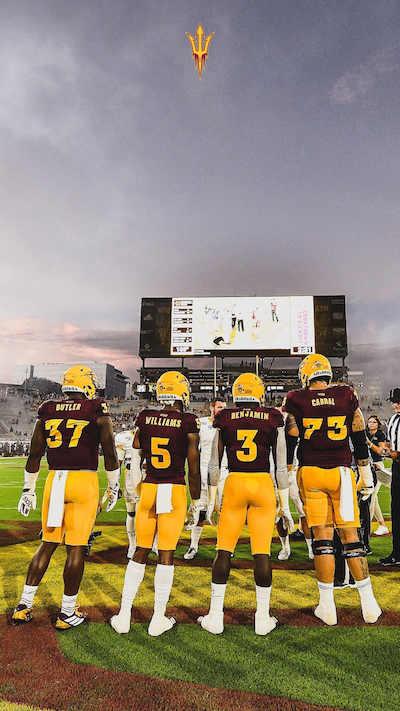 QB Kevin Thomson is a twenty-four-year-old Junior at 6’3” and 205 pounds who went 14-for-20 passing for 303 yards and four touchdowns. He was the 64th ranked “dual-threat” quarterback coming out of high school in 2014 and transferred to the Hornets from UNLV where he couldn’t get on the field.

The Sun Devils on Defense

Now last week, Arizona State forced six fumbles recovering two of them, had three sacks and limited the Kent State Golden Flashes to just three yards per carry on the ground and only 80 total yards by flight (12 completions).  Although the spotlight was on the play of true-freshman quarterback Jayden Daniels, Head Coach Herm Edwards was even more impressed with the play of his defense against the Golden Flashes. The Sun Devils limited Kent State to 200 total yards of offense and didn’t allow the Hornets to score until the12:29 mark of the fourth quarter.

It’s my humble opinion Herm and staff were measuring talent and limiting certain looks in Game 1. I see the Maroon & Gold defense showing up big and playing with swagger all night against the Hornets. They will be flying to the ball and playing from snap to whistle each and every down.

The Sun Devils on Offense

Expect more of the same from the Sun Devils on offense after a balanced attacked last week generated 455 yards while controlling the ball for more than 34 minutes.  Rob Likens said he had to stream-line his play-calling due to injuries. The Sun Devil staff has finally taken a look at Jayden Daniels live and no-doubt have spent some time in the film room this week.

Junior running back Eno Benjamin, who led the Pac-12 with 1,642 rushing yards last season, finished with 102 yards on 22 carries and also caught a touchdown pass in last weeks home opener.  Look for the offense to open up a bit showing off not just Jayden’s cannon of an arm, but his evolution in the pocket. Jayden’s first collegiate game revealed great instincts and decision making. 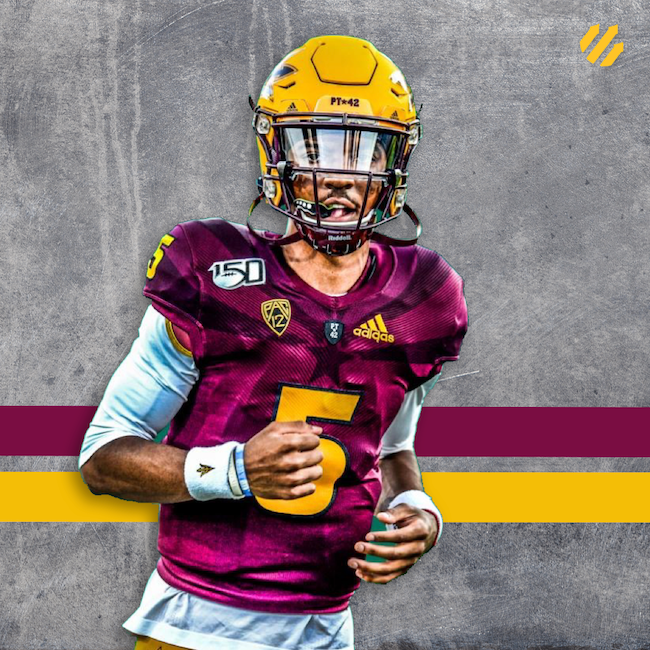 Why? Not only does Arizona State feature a Heisman talent in Mr. Eno Benjamin, but he continues to demonstrate his route running downfield and talent behind the line of scrimmage. What is a defense to do? Blitz constantly? Stack the box? Not with Eno busting a gap for an 80-yard tear. Not with the zip Jayden Daniels puts on the ball. Look for the pigskin to be flying and for the protections schemes to be stronger for the Devils. I see two 100-yard receivers this week and another century mark for Eno.

TOUCHDOWN! Fulcher rushes for 28 yards to add on to their commanding lead. The 77 points are the most ever scored by the Hornets in school history. #StingersUp #BigSkyFB pic.twitter.com/AjDrRHvfrM

The one thing we have all been reading is the ASU Offensive Line made mistakes against Kent State.  Sure, they did and everyone reading this made a few mistakes in the past few weeks right? The protection against Kent State was much better than what social media warriors might tell you.

Jayden Daniels had protection and also moved well in, around, and through the pocket provided by the big uglies.  Daniels also held onto the ball too long amidst three 6’1” 235 athletes who happen to play Defensive Line for the Golden Flashes. Sun Devil Nation should be confident Herm and his staff pounced on several teaching opportunities from last week’s film. Defensive Coordinator Danny Gonzales has noted that Sun Devil fans should see a marked improvement from week one to week two. 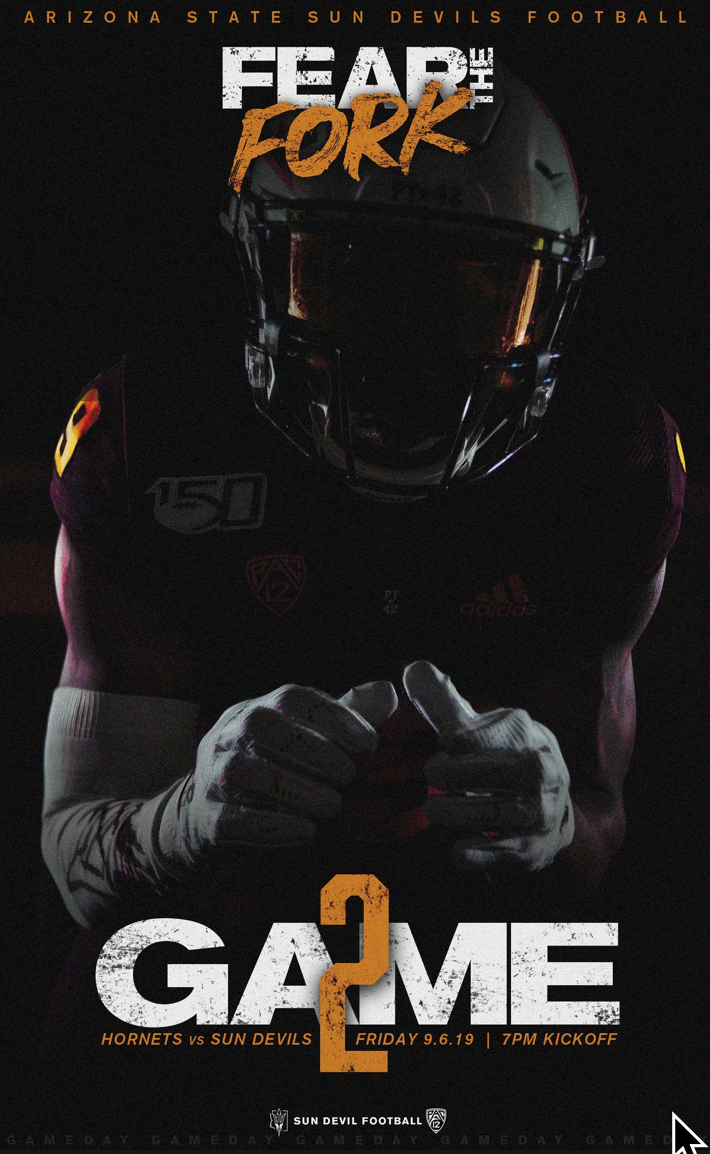 The true “thing” about football is it is not just about football until of course you reach the pro ranks and cry about 12-year-old helmet technology and give yourself frostbite. Herm Edwards and staff have zero care about covering a spread many of us emotionally-charged ASU Alumni expect. He loves a 12-3 win just as much as a 40-3 route. He coaches because he loves working with players, being a role model, and being a leader of young men.  He will slow down play late in games out of respect for the other program, and to also work on fundamentals with his own guys.

Despite all of the perceived “upsets” in Week One of College Football, this one is going to be all Arizona State.