Los Angeles, CA – ASU punched the clock and came ready to work on Wednesday night. The sense of urgency was there knowing they were fighting for their tournament lives.  The Sun Devils (20-7 / 9-7 Pac-12) forced overtime against the UCLA Bruins (21-7 / 11-4 Pac-12), but fell short 79-74. ASU left everything on the court in Westwood, but this loss will have a significant impact on their NCAA tournament hopes. 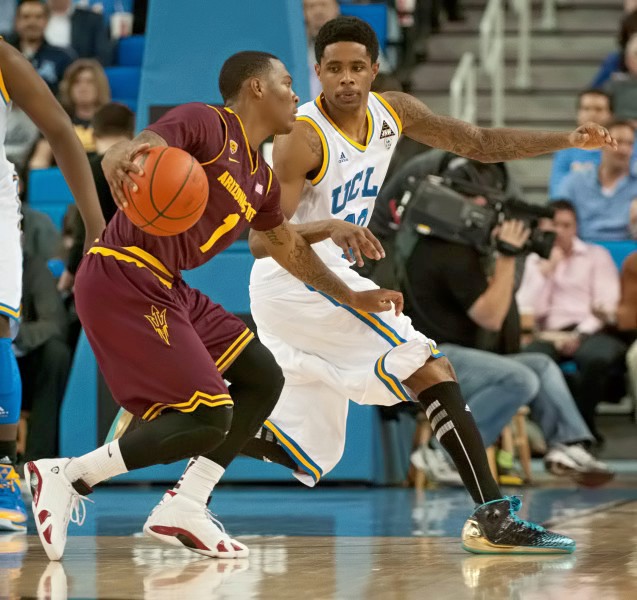 Jahii Carson led the Sun Devils with 22 points and 7 assists.

It’s no secret that Jahii Carson makes his teammates better. Once again, Carson facilitated with (7 assists) and scored (22 points).  Jonathan Gilling was on fire from behind the arc and hit six 3 pointers for 18 points. Carrick Felix set a career high for rebounds with 18, and scored 16 points. Jordan Bachynski added 10 points, 7 rebounds and 4 blocks. The most glaring number from the stat sheet was the zero points from normally reliable Evan Gordon.

The Bruins were led by three freshmen. Jordan Adams scored 22 points, Kyle Anderson and Shabazz Muhammad both added 21 points each.

Can the Sun Devils still make the NCAA tournament? It’s possible, but they will need to beat USC and Arizona on the road, then win at least three games in the Pac-12 tournament to have a chance. 5 wins in a row will be a tall order for a team that has lost 2 in a row and 4 of their last 5 games.