ASU followed up an impressive win over NAU in week one with an even more precise and surgical dismantling of Illinois on Saturday night.  I truly believed that ASU would have to play a near perfect game on offense to have a chance at victory against a vaunted Illinois defense that has four future NFL players in their front seven.  As it turned out, the Sun Devils were able to achieve near perfection on offense.  But not to be outdone, the defense also came out ready to play, resulting in a complete mauling of a team who prior to the season were self-proclaimed contenders for the Big-10 title. 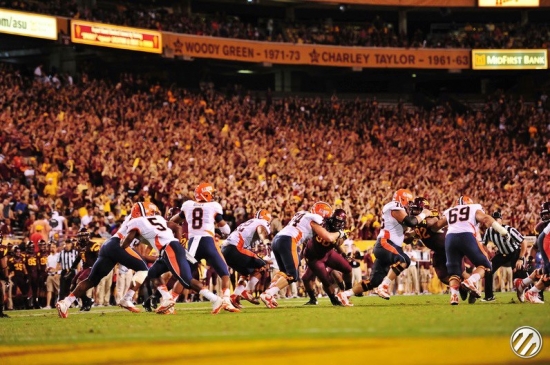 Offensively, it was very evident that the ASU coaching staff had studied the Illinois defense with great detail and a solid scheme in place.  Taylor Kelly was a machine as he completed his first 12 passes to wide open receivers.  In order to loosen up the Illini linebacker core, many of the initial passes were to the short flat. This forced the Illinois front seven to respect the ASU passing game, and would not allow them to just pin their ears back and attack the running game.  The Sun Devil offense kept the Illini defense off balance all night with creative play calling, an improved pace of play, and a very unorthodox substitution pattern with Kelly and Michael Eubank, sometimes subbing in for each other mid-series.  Regardless of the signal caller, ASU marched up and down the field with what appeared to be zero resistance and an ability to pick out and connect with primary receiver targets all night.  After seeing true freshman DJ Foster lined up mostly in the flanker position against NAU, we saw much more of him in the running back and tailback positions.  Between Marshall and Foster, ASU has a very effective running back tandem with very different skill sets.  After the game, Coach Todd Graham said that their goal offensively was to have the Illinois defense reading false keys that would inevitably get their personnel in the wrong places to make plays.  After it was all said and done, ASU out gained their Big-10 rival 510 to 332 yards.  Even more impressive than the total yards stat is the 7.6 yards per play that ASU was able to achieve while only facing a third down situation on seven occasions.

Despite the gaudy numbers put up by Taylor Kelly (18-24 for 249 yard, 1 TD, 0 interceptions) and Michael Eubank (5-5 for 69 yards, 2 TD, 0 interceptions), it was junior tight end Chris Coyle who had the jaw dropping stats of the evening with 10 catches for 131 yards and 2 TD’s.  To put that into perspective, Coyle had more yards receiving on Saturday night than all Sun Devil TE’s combined throughout the 2011 season.  Illinois had no answer for Coyle or any of the speed that ASU possesses with its skill position personnel.  DJ Foster ended he game with 37 rush yards and 72 receiving.  In what might be the only black mark on the offensive performance were lost fumbles by Marshall and Jamal Miles, both inside the Illinois ten yard line, raising the ire of Coach Graham.  A ton of credit has to go to the ASU offensive line for providing protection for Kelly and Eubank all night, and opening holes in the running game.  ASU rushed for a combined 192 yards and passed for 318. 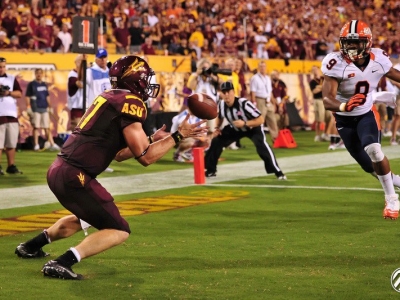 As awe inspiring as the performance by the offense, the ASU defense was equally impressive and with maybe even more story lines.  Senior captain and standout linebacker Brandon Magee failed concussion tests on Friday and was held out of the game after being expected to play.  Having to replace the leader on the defense with only a day to prepare sent a ripple effect across the depth chart.  Originally, in an attempt to be more dynamic and disruptive on defense, Anthony Jones was expected to take over the Sam linebacker position, but was forced into action as Magee’s replacement at the Will linebacker spot.  And Steffon Martin, slated all week to start at the Devil Backer position, was moved back to his Sam linebacker spot.  Jones had not received any practice reps in practice at the Will and was spotted out of place and lined up incorrectly a number of times.  The coaching staff, having enough confidence in true freshman Carlos Mendoza, made the switch and it immediately paid off with Mendoza stepping in front of two first half Reilly O’Toole passes for his first and second interceptions of his young college career.  The celebration for Mendoza was short-lived, however, as he was taken off the field at the end of the half with a shoulder separation.  This was a shoulder that he’d had surgery on in the off-season and limited him through the beginning of fall camp.

Because Illinois starting QB Nathan Scheelhaase was injured in their week-one matchup with Western Michigan University and was held out against ASU.  This severely handicapped the Illini offense, as neither backup O’Toole nor Miles Osei could move the ball effectively against the ASU defense.  The Illini routinely saw way too much of ASU DT Will Sutton, Spur LB Chris Young, and Devil backer Carl Bradford in their backfield disrupting their entire offensive game plan.  Bradford had a breakout game this weak after a sub par performance in week one that would have moved him out of the starting lineup if not for Magee’s injury.  A combination of a relentless pass rush and solid coverage by the ASU secondary limited the number of pass attempts by the Illinois QB tandem (14 of 24 for 101 yards).  Safety Alden Darby killed any chances of an Illini comeback on their first possession of the second half with an interception that he returned 34 yards setting up a Sun Devil touchdown and an insurmountable 35-7 lead.  In what appeared to be a makeshift defensive formation of a 3-4 defensive front minus a nose tackle that traditionally lines up on the center, ASU used defensive tackles lined up wide with Bradford as a stand-up rusher at end.  The quickness of Sutton against offensive guards, Bradford lined up on the end, and Young rushing off of the opposite edge gave the Illini O-line and offensive coordinator fits.  But it was the Illinois quarterbacks that woke up physically hurting on Sunday morning.  The Sun Devils ended up with 6 sacks and forcing 12 total plays for minus yardage.

Again this week, the most impressive part of a complete sixty minute domination was the self-control and poise with which ASU displayed.  There were several opportunities to lay a borderline personal foul hit on Illinois players.  All over the field, Sun Devil players on both sides of the ball pulled up on would be hits that would have certainly been capitalized on in recent seasons.  Graham has clearly gotten his point across to several players that I was fully expecting to take sideline shots on Illini players since that was what they’d routinely done prior to the new coaching regime.  Hats off to maintaining an aggressive and intimidating style while being disciplined and sportsmanlike in their approach.  Some very frustrated Illinois players attempted to engage ASU players in some pushing and jawing, but our guys just walked away and prepared for the next play.

Another very impressive statistic that needs to be mentioned this week was the single flag thrown against ASU.  The flag was an intentional delay of game penalty strategically taken to back the Devils up five yards in order to give punter Josh Hubner more field to punt the ball.  In two games now, both of which were dominated by ASU, the propensity to lose focus, discipline, and intensity would usually lead to mental mistakes and penalties.  The constant preaching by this coaching staff to avoid such situations is paying off.  Every player knows that a mental mistake leading to a penalty will land them on the sideline next to a coach watching the game. 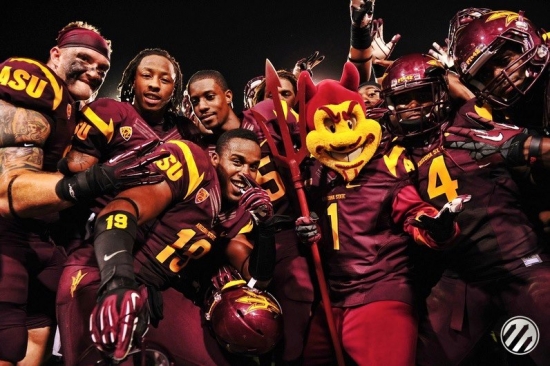 After two games in the books, many will again point to reasons why and how ASU was able to completely control its opponent for the second week in a row.  First, skeptics pointed to NAU being a lesser opponent, and now it will be the absence of standout QB Nathan Scheelhaase.  As dominant as the Sun Devil defense was against backup quarterbacks, it was the complete clinic that the offense put on the Illini defense that caught my attention.  Coach Graham has told his team that adversity is difficult to handle, yet success is even more difficult deal with.  A team that started the season completely off of the national radar is now starting to receive rave reviews across the country.  ASU will be tested this coming Saturday and we will see if the Sun Devils are able to handle their success to this point, and put together another near flawless performance against an even better opponent in Missouri.