Youth, inexperience, and some old bad habits reared their ugly heads for the first time this season last Saturday in Colombia, Missouri.  In a game filled with adversity, ASU found themselves in an improbable position to snatch a win from the jaws of a mistake-filled defeat.  Both the execution and discipline that we’d seen and come to expect from the team under Coach Todd Graham were conspicuously absent in the first road test of the year.  As a result, the new ASU coaching staff faces their own adversity and challenges to overcome the same mistakes starting this week against Utah. First and foremost, big respect and praise goes to the defense for keeping ASU in the game after being put in some very difficult situations.  Look no farther than this statistic to sum up what they faced: The three Missouri touchdown drives required them to go a total of 74 yards (two of those drives started at the ASU 18 yard line).  ASU’s time of possession in the first half was 9:54.  Think about that for a minute…There are 30 total minutes of clock time in a half.  That means that the defense was forced to be on the field for 20:06 over the first two quarters and only gave up 17 points. 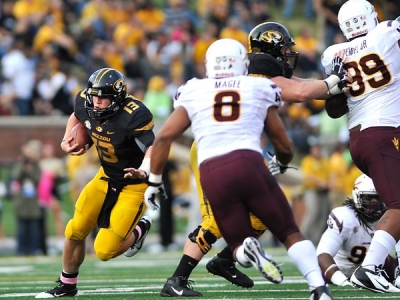 There were several standouts on the defense that had excellent games and deserve mention.  Will Sutton continues to be very disruptive in the opposing backfield, and had eight tackles and a sack.  His quickness off the line and in pursuit laterally is just fun to watch.  Brandon Magee was all over the field and had 12 total tackles, including 1.5 for loss and an interception on a beautiful deep drop at the ASU 3 yard line that stopped a Mizzou scoring drive. Carl Bradford showed the explosiveness off of the line that earned him the starting nod at Devil Backer. In the secondary, Keelan Johnson displayed great discipline in his his coverage, had some highlight reel hits, and was sure in his tackling, which stood out due to an overall poor tackling performance on defense.  But make no mistake about it, the defense was not the problem on Saturday night.

Defensively, it was going to be imperative for ASU to exploit the youth and inexperience of the patchwork Tiger offensive line.  The ASU front seven was disruptive all night and only allowed for a 2.7 yards per carry average.  That is impressive when you look at the size of backup quarterback Corbin Berkstresser and the talent in the Mizzou backfield.  This stat could have been even more impressive had ASU been more sure in their tackling on first contact.Throughout the game, the defense did a great job of preventing big plays.  The longest play given up was a 26 yard pass.  The secondary was very assignment sound in their coverage outside of a few bad reps.  On the Brandon Magee interception, a blown assignment left a Tiger receiver open in the end zone.  ASU was lucky to have survived Berkstresser not seeing him.  Pressure up front certainly aided the secondary in their coverage, but overall the defensive backfield was very solid on Saturday night.

Prior to the Mizzou game, I wrote a “to do” list for ASU to check off in order to stay unbeaten.  Here’s the link for your reference: http://dieharddevil.com/articles/the-sun-devil-to-do-list-for-victory-today/

The first item of business was to get Cameron Marshall the ball between the tackles in order to soften up the interior of the stout Mizzou front seven.  Very early on, it was evident that the Tigers defensive front was in complete ownership of the line of scrimmage.  Marshall was given the ball once on the opening drive (2nd and 4) for a gain of 1 yard.  By the end of the first quarter, Marshall had 2 carries for -1 yards and ASU was staring at a 10-0 deficit.  The power run game was all but abandoned at that point and Marion Grice and DJ Foster received the remaining carries from the RB position in the first half totalling 13 yards.  Marshall was conspicuously absent from his kickoff return team duties leaving me to believe that there is an undisclosed injury that has been hampering him since camp.  Grice and Foster are very capable backs with a nose for the end zone, but they just don’t possess the size and power of Marshall.

Next, ASU needed a receiver to step up as a big play target to stretch the field.  Not only did that never materialize, but there were multiple dropped passes that stalled momentum.  Rashad Ross had at least three drops including one that would have been an easy touchdown.  That can not happen on the road against a big time opponent if ASU expects to announce itself as an upper-tier program.Playing on the road in front of a screaming sold out 71,000 seat stadium was going to require a ton of discipline on the offensive line.  The Sun Devils were called for three false start penalties, none more costly than Brice Schwab jumping early inside the ASU ten yard line.  This set up a conservative play call on 3rd and long and a subsequent punt from the back of the end zone.  Just to illustrate the ripple effect of a penalty like that, the punt was returned to the ASU 18 yard line and set up a Missouri touchdown and a 10-0 lead.

One of the most glaring weaknesses for ASU last Saturday was the Special Teams unit .  Mizzou returned the opening kickoff 42 yards giving them excellent field position on an opening drive that resulted in a field goal.  On what would have been ASU’s second offensive possession, the Sun Devil defense was put in it’s first of several precarious positions when Jamal Miles fumbled a punt return giving the Tigers the ball on the ASU 18 yard line.  This led to a Mizzou touchdown and an early 10-0 lead.  After an impressive defensive stop (Magee’s interception) the offense was unable to move the ball forcing another ASU punt. The punt coverage team was fooled on a reverse to EJ Gaines allowing him to return the ball to the ASU 18 yard line resulting in another touchdown and a 17-0 lead.

Later, Josh Hubner mishandled a snap that was a bit high, but should have been easily caught and punted.  Instead, Hubner was forced to punt on the run resulting in an 11 yard punt and Mizzou taking over on the ASU 33 yard line leading to another short field for Mizzou to work with, a touchdown, and 24-7 lead.  The combination of Hubner’s huge leg and a coverage team loaded with experienced defensive starters should have been a huge weapon in the battle for field position.  That clearly did not happen on Saturday.  Perhaps the biggest mishap on special teams came when place kicking holder Ryan Woods bobbled a perfect snap on an extra point resulting in 24-20 Mizzou lead.  Had ASU successfully kicked that PAT, they would have been within 3 points and not forced to score a touchdown for a win. Rather, it would have only required a field goal that would have taken the game into overtime with ASU having all the momentum after having scored two touchdowns in the fourth quarter and holding Missouri scoreless.

The combination of poor punt coverage, mishandled snaps, and a dynamic Mizzou return game set the Tigers up with excellent field position all night for each of their short scoring drives.  What was supposed to have been a huge strength coming into the season, our return game has been less than stellar and did not provided ASU with great field position all night.  The number of proven kick return weapons should have helped the ASU offense gain valuable field position against a solid defense, but the Sun Devils were forced to sustain long drives before getting into the end zone.  ASU lost the turnover battle 4-1 (2 Int/2 Fum) and was still in an unlikely position to win the game.  Ball security has been preached ad nauseum by this coaching staff, and yet the Sun Devils continue to turn the ball over.  This is something that is going to have to be straightened out going into conference play this weekend against a very stingy Utah defense.

Coach Mike Norvell and the offense continued its unorthodox pattern of substituting quarterbacks, sometimes mid-series when Taylor Kelly had a nice rhythm going.  Look no farther than ASU abandoning their power I-formation sets that had been so successful in short yardage situations in the first two weeks.  The Devils were stuffed at the Mizzou one yard line late in the 4th quarter with the go-ahead touchdown hanging in the balance.  Questionable play calling at the end will face certain scrutiny during film sessions this week as the team prepares for Utah.  Coach Graham and the ASU coaching staff have accepted full responsibility for a lot of these issues and have promised to make necessary adjustments.

Finally, Taylor Kelly’s numbers were not as impressive as they had been coming into the game.  He did, however, extend some plays using his athleticism and was able to keep drives alive.  I continue to be impressed with how cool he is under pressure.  Consider that there had only been one pass drop over the course of the first 2 games versus (what I counted to be) 6 drops on Saturday.  Along with Ross, Richard Smith and DJ Foster had drops on back-to-back plays essentially stalling a drive.  I’m not sure why certain receivers are not getting opportunities at this point after having a relatively solid camp, but it’s something that I’m sure this is another issue that the coaching staff will address this week.

After it was all said and done, the Sun Devils had an extremely hard time while facing their first real adversity of the year in a game that still came down to the wire with ASU in a great position to escape Colombia with a signature win.  If a silver lining does exist, it’s that this team refused to give up, and fought to the end showing great heart, character and resolve.  Sun Devil Nation will be watching intently this weekend to see how the 2012 Sun Devils respond, including Coach Todd Graham and the ASU coaching staff.