The Sun Devils celebrated another complete domination of their second 2012 opponent in a 45-14 blowout win over Illinois last Saturday.  But that celebration was short lived, as they had to immediately start game planning for their first road test of the season against a much more formidable Missouri Tiger team.  Mizzou blew a lead in their first conference game as a new member of the Southeastern Conference on Saturday against #7 Georgia, and is undoubtedly feeling like they need to prove their worth as one of the “big boys” in college football.  Despite the loss, they are a very talented team licking their chops looking for revenge against ASU after losing a heart-breaker in overtime Sun Devil Stadium last season. ASU will invade Farout Field at Memorial Stadium in Colombia, MO as underdogs, but riding a wave of confidence after two very convincing home wins to start the season.  However, going on the road into SEC country is a completely different animal, and “the Zou” is a notoriously difficult place to play in front of a raucous crowd.  There’s no need to remind Sun Devil Nation how poorly our team has fared on the road over the course of the last several years.  Coach Graham has arranged to create as close to a home environment as possible.  Signs, familiar locker room artifacts, and even the same locker room air fresheners will be in tow by the Sun Devil contingency in an attempt to maintain the same team wide focus and intensity as a home game in Tempe.

However, even with all the creature comforts of home, it will be challenging for ASU to contain the nation’s premier dual-threat quarterback in James Franklin.  Look for the Sun Devils to add some wrinkles in their defensive front seven, having to do a better job this week of maintaining outside contain on Franklin.  He proved in last season’s game in Tempe (314 yards passing and 2 TD’s, 84 rushing and 1 TD) that he is very capable of taking a game over on his own.  The only dents in the ASU defensive armor to this point in the season has been their propensity for giving up big chunks of yardage only after allowing the opposing QB or RB to break outside containment.  Saturday, the defensive coaches will have their hands full attempting to find the delicate balance of pressuring Franklin and keeping him from breaking long runs to the outside.  Once forced outside, he has the ability to tuck it and ramble for big yardage, or pull up and hit one of several premier wide receiver targets.  With hulking nose tackle Mike Pennell back this week after suspension, I can foresee ASU going big on the defensive line to stuff inside runs, while possibly supplementing that with excessive speed on the edges to match the Tiger backfield, and assigning an athletic defenseman to spy (follow wherever he goes) Franklin. The key will be forcing the Mizzou ball carriers back inside toward the teeth of the Sun Devil defense. 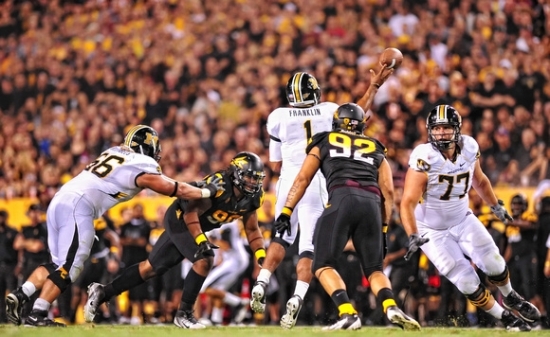 ASU must figure out a way to contain Missouri QB James Franklin to have a chance at victory. (Photo by Peter Vander Stoep for DieHardDevil.com)

The Mizzou spread-option offense is a big play waiting to happen.  They are skilled and fast at the receiver position including the Rivals national overall top 2012 recruit Dorial Green-Beckham.  Green-Beckham is an imposing 6′ 6″ 220-pound player with great speed who is going to provide Franklin with a mismatch opportunity all over the field.  Other very capable receiver targets include Marcus Lucas (6 rec, 88 yds, 1 TD vs GA) and L’Damian Washington (2 rec, 81 yds, 1 TD vs GA) who are both very shifty in the open field and will force the ASU defense to be even more assignment sound and sure in their tackling.

Complimenting Franklin in the rushing attack are a couple of game breaking running backs in Kendial Lawrence and Marcus Murphy. Lawrence is averaging nine yards per carry and will remind Sun Devil Nation of our own DJ Foster with similar size, speed, and elusiveness in the open field.  The only deficiency that may hinder the Tiger offensive attack is the loss of starting left tackle Elvis Fisher.  Once Fisher was taken out of the contest with Georgia, the Missouri coaching staff was forced to juggle their O-line personnel to fill in, resulting in lost focus and leadership as they began to accrue penalties, missed blocking assignments, and suffered a diminished rushing game.  Fisher is expected to miss several weeks with a knee injury opening the same door for ASU that Georgia was able to run through with their own relentless pass rush.  ASU will get standout linebacker and team leader Brandon Magee back this week after sitting out the Illinois game with a concussion.  However, Magee’s backup, freshman Carlos Mendoza was lost for the season just before halftime last week with a shoulder separation injury.  Fortunately for ASU, the defensive coaching staff has some capable personnel that can play multiple positions and create depth where they are thin.  It was announced this week that Deantre Lewis, who made his mark as an electric RB as a freshman two years ago, will be moved to the defense where his athleticism should help bolster the depth chart. 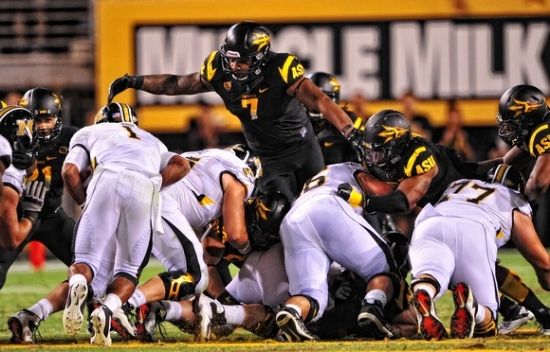 Defensively, Missouri is holding their opposition to less than three yards per carry.  That doesn’t bode well for an ASU attack that has used it’s depth at running back to set up a surprisingly productive passing game.  If ASU can’t get production in the running game, look for tight end Chris Coyle to have another monster game.  Coach Graham has stated that he is still waiting for one of the speedsters in the ASU receiving core to have a breakout game and become a “go to” guy down field.  In last week’s win against Illinois, the receivers had a combined 7 catches and didn’t seem to be the primary targets for most of the game.  The Tigers run a more traditional 4-3 defense and are big and nasty on their interior D-line.  A pair of 300-pounders in Matt Hoch and Sheldon Ricardson who will be difficult to move around and create the running lanes that ASU has been providing Cameron Marshall, DJ Foster, and Marion Grice.  The daunting task will fall on a much improved ASU offensive line to win the battle in the trenches for a third consecutive week.  Also, crowd noise will create a headache for the Sun Devil no-huddle, fast-paced offense to possibly not be able to play the desired tempo they’ve been accustomed to in Tempe.

The Tiger linebacking core is led by middle linebacker Will Ebner, a big athletic force in the middle who is flanked on the strong side by Andrew Wilson who is the team’s leading tackler.  The linebackers have been excellent in stopping the run, but will have their hands full in covering the short flat and containing ASU’s quick strike passing game and intermediate crossing routes.  Again this week, look for the Devils to loosen up the edges with their short passing game.  As will be the case in most weeks this season, ASU will have a speed advantage that should be able to exploit a bigger and stronger Missouri defensive front.  If the Devils can continue to get the ball to play-makers in open spaces, this should open up big play potential down field as long as one of ASU’s unproven receivers can step up this week against standout Tiger corners EJ Gaines and Kip Edwards.  The Devils will look to put pressure on the opposing safeties with clear-out routs to the tight end and slot receivers who were routinely wide open against Illinois. 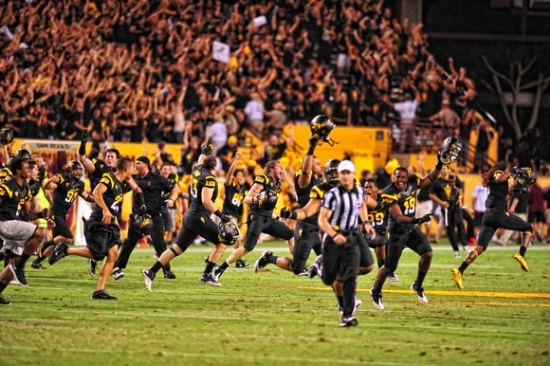 The Sun Devils rush the field to celebrate their overtime victory over Missouri last year. (Photo by Peter Vander Stoep for DieHardDevil.com)

It may be becoming cliche to say that ASU has to play a near-perfect game in order have a chance in this one.  However, playing on a national stage in prime time against a favored opponent will require the Sun Devils to win the turnover battle, continue to limit penalties, and maintain discipline in all phases of the game.  This is a defining game that will go a long way in validating Coach Graham’s desire to be a national power sooner rather than later.  It’s been said that there is nothing more dangerous than a wounded animal.  The Tigers fit that bill this weekend, and the Sun Devils will be locked in a very physical battle for a full sixty minutes on Saturday.