The collective mood inside of Reser Stadium in Corvallis this Saturday will feel a lot more like a street fight than family picnic. Oregon State was just upset last week by UW, putting an end to their undefeated season. ASU has lost back to back home games bringing their record to a much more pedestrian 5-3. Both teams still have hopes of winning their respective division in the Pac-12, but both teams currently have their backs against the wall and are looking to get back in the fight and come out swinging. 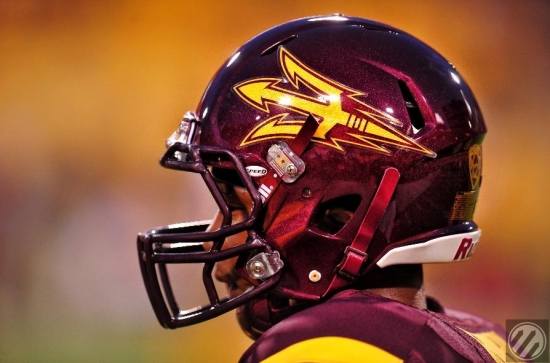 Beavers coach Mike Riley has tabbed junior back-up quarterback Cody Vaz to start in place of a rusty Sean Mannion who threw four interceptions against the Huskies after sitting out several weeks rehabbing a knee injury. Vaz replaced Mannion last week and completed 7/11 passes for 97 yards and a touchdown in less than a quarter of work. The pass-heavy Beaver offense will face the conference’s best pass defense with ASU only giving up 148.4 yards per game. But much like last week, if ASU can’t get the kind of pressure on Vaz that they were able to apply on quarterbacks earlier in the season, OSU has the kind of receiving weapons on the outside that will torch the secondary. Wide receivers Markus Wheaton has 50 catches for 679 yards and 6 TD’s, and Brandin Cooks has 44 catches for 790 yards and 3 TD’s. They make up the most formidable receiving core the Devils have faced all season, so we may see much more zone coverage in the secondary this game.

Oregon State ranks 11th in the conference in rushing offense, which may be misleading due to their talent in the backfield.  Running back Storm Woods only carried the ball 15 times against UW last week, but still rushed for 90 yards and a 6.0 yard/carry average. He is also a threat catching the ball out of the backfield, which ASU struggled to stop last week against UCLA. The Devils have also had a tough time stopping the run this season allowing 173.6 yards per game (10th in the conference), which may tempt the Beavers into exploiting the run defense to use the play-action pass for big plays.  Something to keep an eye on if the Beavers manage any element of success running the ball early in the game. Much of the defensive scheme is going to depend on the status of D-Linemen Will Sutton and Junior Onyeali. ASU may put a premium on slowing down the passing game by dropping more players into coverage or using less blitz packages if Sutton and Onyeali are able to go. ASU still leads the conference in total defense allowing 322 yards/game, but much of that came with an injury-free starting lineup.

Defensively, Oregon State moves seamlessly between 4-3 and (much less) 3-4 fronts and are able to get linebackers deep into coverage, essentially taking away the short to intermediate routes that ASU has thrived on running.  They can be predictable with their blitzing, but are still a handful when they come after the quarterback.  When OSU gets beat for big plays, it’s primarily down field and on their safeties. The Beavers boast the second ranked defense just behind ASU allowing 344.1 yards per game, but only allow (conference best) 17 points per game. The Beaver front 7 are able to create pressure on quarterbacks while still doing a good job of setting the edges for run contain (save the UCLA game). Sophomore bookends Scott Crichton and Dylan Wynn are prototypical ends with Crichton leading the team eight sacks. Although fundamentally sound, the front seven don’t possess the same kind of speed as Oregon (who does?) or UCLA and can be beat horizontally on quick-strike passes to the outside. Again, this plays into the strength of the ASU offensive attack with wheel routes and screens, but the Sun Devil receivers will have to do a much better job of getting down field for a few big plays to keep corners out of the flats.  And as stated previously, big plays were made against them down field while in man coverage, so ASU will have to get vertical in order to open that route-running space if the underneath routes are shut down.  The OSU linebackers are high football IQ guys that don’t get caught out of position, and do a good job of tackling in space.  Linebacker Michael Doctor is a guy that ASU will have to keep guessing and giving false reads, as he is their one true big play maker among the three.  ASU will want to use speed against them, and employ more misdirection in order to create running lanes and create blown coverages.

As important as it is for ASU to get a vertical passing game going, this may be the toughest defense to do it against.  The Beaver corners are better than most of the pure cover guys that ASU has faced, and the Devils still haven’t been able to put up numbers on the outside against anyone.  Senior corner Jordan Poyer is a true cover corner and the anchor of the Beaver secondary with five picks.  Rashaad Reynolds is much like Osahon Irabor, who is a good cover corner, but excellent against the run.  OSU will also leave their corners on an island, which frees up outside linebackers to either read and react or cover passing lanes, and ASU will have to disrupt that scheme in order to be the high octane offense that they want to be.

This game is another defining moment in the home stretch for ASU, and presents yet another opportunity for the Sun Devils to finally win a game that would keep them in the mix of the upper echelon of the conference.  This Sun Devil team has the talent to win, but is still dealing with some key injuries on their thin defensive line that leave them a very small margin of error for victory.   So keep track of every inch gained or lost during the game tonight, because every single one of them will matter and have a direct impact on the final score tonight for the Sun Devils.

NEW: ***Attention SUN DEVILS*** Post your favorite topics and connect with other DieHard Sun Devils on DEVILINK, the Social Network of DieHardDevil.com. To join the movement, take a minute to Get Your Free DEVILINK Profile NOW 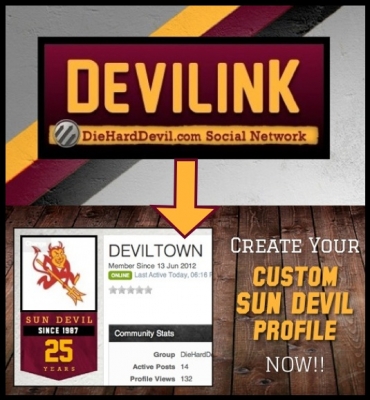