Tempe, AZ – Sun Devil Nation is actively counting the days until their first glimpse of the 2013 football team at the spring scrimmage this Saturday. Expectations, optimism, and confidence are at all-time highs after the way the 2012 group dominated at the end of last season. Combine that with the return of a lot of talent, and you have the makings of a team that should contend for not only the Pac-12 South Division title, but for a conference title and long-overdue Rose Bowl birth. It’s time to consider the impact of ASU 2013 Recruits on Sun Devil Football in 2013.

For the most part, many of the household names will continue to plug into their usual starting positions and pick up right where they left off in December. However, the departures of “Field” (Free) Safety Keelan Johnson, “Field” Side Cornerback Deveron Carr and “Will” Linebacker Brandon Magee leave some very important positions up for grabs this spring. Having a current roster with a junior class that is lacking in numbers and depth, the ASU coaching staff went juco (junior college) heavy again this recruiting cycle with players that will be counted on to make an early impact on the depth chart come fall. DieHard Devil is taking a closer look at guys who should factor into the depth chart right away in August.

Arguably the top recruit in this cycle is juco DL Marcus Hardison, who will remind many of Will Sutton, with his explosiveness and ability to effectively play inside or outside depending on defensive formation and down and distance situation. Hardison is impressively long and strong at 6-foot-4, 290 pounds and primed to play at any position across the defensive front. Depending on his physical fitness, he will definitely change the look of the defensive front. Can you imagine two “Will Suttons” either in the game at the same time or with the ability to spell one another without any drop off? Well then pay some attention in August, because he has the potential to be a run stopper and menace in the backfield, making him the newest crowd favorite and a complete headache for opposing offensive linemen and quarterbacks.

CU transfer Kisima Jagne has an NFL body, but has been conspicuously absent from practice for the past week. This is a physical freak of nature who may have matured physically prior to having matured mentally while transferring to a discipline-first program. This is another story to watch heading into the fall because he adds a solid defensive presence to the team when involved.

Demetrius Cherry is another juco true DE who is a Julius Peppers clone, but on film looks like he needs some seasoning on his technique. Physical tools alone may keep him off the redshirt list, as he is another guy primed to make his way into the defensive front seven rotation in the fall.

At the “Will” LB position, the current coaching staff has plugged in a recovering (from shoulder surgery) Carlos Mendoza who showed well in limited time last season as a true freshman. He is an above average LB beyond his age in years having been coached by Clay Matthews Jr. in high school. If healthy, he will be a serious option, but there are at least two incoming players this fall that will challenge him for the position. They have inserted incumbent “Spur” Safety Chris Young at the “Will” in an attempt to bolster the run defense, but CY’s talents at the Spur (hybrid LB/S) make it difficult to move him elsewhere. If Anthony Jones can digest the nuances of the defense at the “Will” spot, he may factor in as well.

Incoming juco linebackers Eriquel Florence will be someone DieHard Devil will keep a close eye on, as he is a Brandon Magee clone physically, but only time will tell if he can grasp the defensive concepts well enough to replace one of the all-time greatest Sun Devils to ever don the maroon and gold. Another incoming juco LB Antonio Longino (who on film can bring the wood) is a physical specimen and will throw his hat in the mix to replace Magee. Needless to say, talent, physical ability, and depth run abound for the “Will” position…But it may take some time before we see anyone play the position as emotionally or intellectually sound as Magee, who was the leader for not only his position group, but the entire defense. 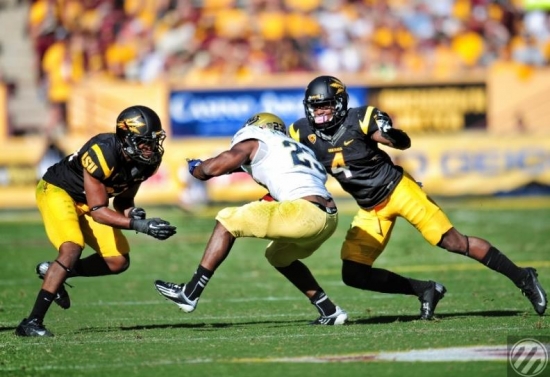 Newcomers in the fall with help solidify the Sun Devil defense.

Deveron Carr spent his ASU career as a dichotomy of either a player who battled injury and undisciplined play, all the while locking down wide receivers while in man-to-man coverage in his “Field” (wide) Side CB position. In a pass-happy conference like the Pac-12, the field side cb is often left in man-to-man coverage against some of the best wide receivers in the country. Rashad Wadood, Robert Nelson, and Lloyd Carrington have all shown an ability to grip the starting spot, but none of them with the kind of consistency that will allow coaches to hand it over to any of them. Nelson has the physical tools, (as was evident in a Nickel Back position against our in-state rival) but lacks the coverage discipline that should make him the odds-on favorite to be automatically slotted as a starter. Carrington is physically able to play any number of defensive back positions and should play his way into a ton of downs in 2013.

One position that I can’t wait to see the competition for is the “Field” (Free) Safety spot. Keelan Johnson played it as well as anyone, as he led the team in picks in 2012 and laid the wood to running backs venturing into the secondary. No one on the current roster at the position posesses the length, strength, quickness, or ball-hawking skills as Keelan. As of now, Zeke Bishop and Laiu Moeakiola have split time at the position, but look for one of Robert Nelson, Lloyd Carrington, or whoever may lose the battle at the Field Side CB to step into the FS role. If current roster personnel can’t cover the spot, look at incoming frosh James Johnson (who has the physical tools), and to a lesser degree (athlete) Marcus Ball to get a look at the position. We will be keying on this all-important battle as close as any others this fall.

Despite the gaudy numbers that the offense put up in 2012, it’s no secret that they excelled despite a below-average wide receiving corp in terms of talent, depth, and production. With Rashad Ross and Jamaal Miles graduating, that left an even deeper deficit of talent and experience at the position. Coach Todd Graham and company addressed this void with an incredibly impressive haul of incoming wide receivers, none of which are under six-feet tall and with speed to burn. Of any position group that we watch on Saturday, none of them have the probability to look entirely different come fall. Juco, all-world, NFL prospect Jaelen Strong will be the primary player expected to bring a deep, outside, game-changing threat to the offense. However, in my opinion, 6’4″ juco receiver Joe Morris might be as primed as anyone to be the first newcomer at WR to make his mark as the outside receiver ready to put his stamp on an illustrious Sun Devil career.

Look, I’m as fired up as anyone to get a good look at what the 2013 squad has to offer, but I also understand that there are plenty of starting positions that will be won and lost in fall camp. Either way, there is a ton to be excited about as we head into a long summer. Get on board for all of it, because this is a group of young men to be proud of both on and off of the field.

Here is the schedule for Saturday’s festivities. Get involved, because it’s going to be a long few months before we hear those pads crack again…