Their opponent Rider University out of Lawrenceville, New Jersey was a well-coached veteran group visiting Tempe to take care of business. Rider entered the game at 2-0 while averaging 86-points per contest.

With a lot of questions about the identity of this Arizona State Men’s Basketball team, Coach Hurley knew his Sun Devils could not afford a home-court loss or emotional letdown.  Arizona State now heads on the road for some time. The Devils don’t return to the confines of The Bank until December 7th against the Louisiana Ragin’ Cajuns. 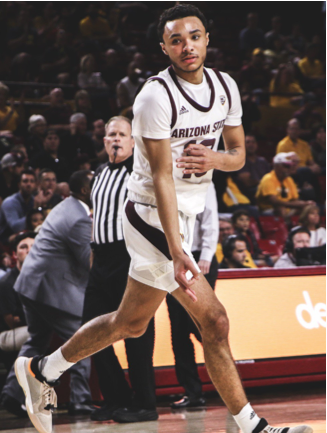 Arizona State had 16-steals helping to force a total of 29-turnovers against Rider.  The Sun Devils had 6 blocked shots and 45 rebounds, 15 of which were on the offensive side of the ball.

ASU is now averaging 13.33 steals per game. In just 3-games, Sun Devil Opponents have turned the ball over 70 times.

Romello White who struggled in the first ten minutes helped spark an ASU run with a dunk and layup making the game 21-16.  That was followed by a Remy Martin rejection at the rim on defense.

The Sun Devils found their stride and hustled their way to a 43-24 first-half lead essentially scoring 39 points in 10 minutes of basketball.  The Sun Devils held the Broncs to just 8 total points in the last 7:15 seconds of play in the first.

“A team should be an extension of a coach’s personality. My teams are arrogant and obnoxious.” – Al McGuire

Coach Hurley was never a gifted athlete, but he brought swagger and fire to every fight as a player at Duke University. His knowledge of basketball is tremendous. Translating his experiences, work ethic and heart as a Coach to young players is never an easy task.

Since day-one, Bobby Hurley has spoken of his intention to bring a defense with an “East Coast mindset” to Tempe. What ASU may lack in height for a Pac-12 Conference Schedule, they need to make up for in heart, effort, and defensive tenacity.

Mirroring Bobby Hurley’s fire, it is fast becoming apparent his Sun Devils will light it up defensively for 40-minutes. The effort by this Arizona State team Sunday was epic.

Up by twenty points with nine minutes remaining in the second half, Arizona State was aggressive, pressing full-court and platooning athletes on and off the court. Rider continued to fight but was physically and likely emotionally gassed. Long missed 3-point attempts started to turn into fast transition opportunities for the Sun Devils. Freshman Center Jalen Graham had 4 boards and 2 blocked shots. Graham got a piece of a 3rd shot that didn’t hit the box score, and he is establishing a nice tall presence in the paint. After adding four points in mixed playing time against Rider, Graham is now 10-14 from the field with 10 rebounds and 8 blocked shots in his first three games.

Remy Martin, Alonzo Verge Jr., and Jaelen House combined for 10 steals.  Cherry, Verge, House, and Martin collected 12 assists with only 2-turnovers between them.

the Sun Devils racked up 1️⃣6️⃣ steals last night, their most since 1996, leading to 3️⃣1️⃣ points off turnovers pic.twitter.com/Y1Ops7kpE0

Romello White finished with 11 points, 7 rebounds, and 2 blocked shots. Most importantly for White, he found his rhythm in his first truly meaningful minutes of the 2019-2020 campaign.

They say players play, but tough players do whatever it takes to win. “Players” are a dime a dozen, but having a team committed to playing hard on both sides of the ball, and playing for each other is priceless.

The Rider Broncs will be a postseason tournament team and are picked 2nd in the MAC. This was a statement-win for Arizona State who is now scoring 84.3 points while only allowing 61.6 points per contest (22.7 differential per game).

The boys got DOWN in the Desert. 🌵

Remy Martin and @jaelenhouse2 both racked up 2️⃣0️⃣ points in @SunDevilHoop’s 92-55 win over Rider. pic.twitter.com/JLKd0ETNfu

House also finished with 20 points, effectively ending his early shooting woes. Jaelen’s defensive effort and energy is going to be a vital part of this 2019-2020 Arizona State season.

Alonza Verge Jr. continues to struggle to find his shooting rhythm going 5-15 from the field and again zero-percent from downtown on 0-4.  Verge grabbed 6 boards, 4 steals, 4 assists, and had no turnovers. Verge will have to rebound, hustle and dish the ball well until he finds his shot. Every Sun Devil entered the game, and it looks as if Hurley could use a nine if not ten-player rotation in spots. The biggest take-away from tonight’s blowout victory at The Bank was the conditioning and physicality of Bobby Hurley’s Sun Devils. Continuing to rotate fresh legs as part of the bigger game plan will provide a boost to ASU’s performance this season.

RT to congratulate @JHarden13 on receiving back-to-back Player of the Week honors!