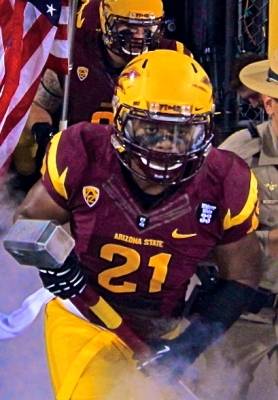 Tempe, AZ – By now, you may have seen or heard about the new Sun Devil Hammer used by the Arizona State football team.

On game day, the players carry it off the bus, through the Devil Walk and into the locker room before battle. When game time arrives, a chosen player gets to wield the hammer and lead the team out of Tillman Tunnel. The team also takes it on the road.

It has become a symbol of Sun Devil Strength.

The hammer breaks rocks when the Devils emerge victorious on Game days. Specifically, it crushes a designated rock for each opponent. The goal each year is to break twelve rocks, a symbol of perfection. It’s one of the latest ideas to have materialized in the new culture that Coach Todd Graham has created at ASU.

The new “Thor” inspired design for the giant war hammer was a collaboration between ASU and a Sun Devil alumni.

So how does something like this go from a concept and idea to actual design and completion?

Enter Brock Dunlop. Brock is an ASU alumnus who graduated in 2008. He is also the owner of Dunlop Customs, a welding and fabrication company that specializes in custom motorcycles and off-road vehicles.

Brock is friends with Josh Storms, Assistant Head Coach for Sports Performance at ASU. He has worked on some motorcycles for Josh in the past and the two became close.

Before the 2013 season, Josh had discussed the custom hammer idea with Coach Graham and Strength & Conditioning Coach, Shawn Griswold. The problem was finding someone who had the ability and resources to put everything together and pull it off.

One day, Josh approached Brock with the idea and concept of a new hammer for the Sun Devil Football team, and Brock was happy to step up to the challenge.

Brock was excited about the project and ready to go, but he needed some help from some associates in the industry. He assembled a team that could move through each step of the process.

First was Donald Ortiz with Jemelco, a machine repair company. Ortiz spent hours on the weekends helping with initial designs on the computer. 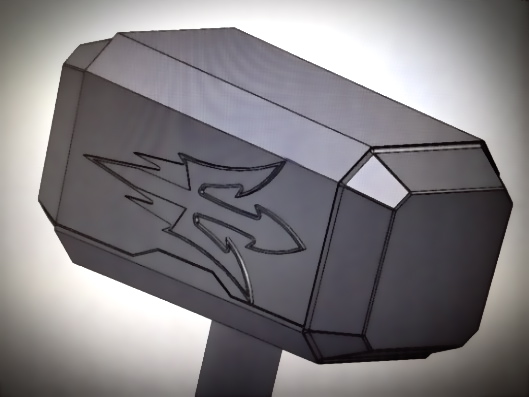 The conceptual design for the Sun Devil Hammer

When the design was complete they needed the right materials, and Doug Cone with AZ Metals stepped up and donated the steel. Then after achieving the desired shape, the hammer was heat treated in a 15 hour process at ABS Metalurgical.

Finally Brock’s Dad, John Dunlop, added some of the finishing touches and designed the copper brass handle with custom nut.

All said and done, the hammer weighs a burly 36.8 pounds and took about 100 hours to complete. The total cost is estimated at $7,500, all of which was donated by Brock and his team through their time, efforts and expertise. Brock Dunlop is a DieHard Devil and his team “Proved It” with  their contribution to the Sun Devil team.

When’s the next chance you can see the hammer? When the Sun Devils are announced at Stanford Stadium on Saturday, you’ll see it hoisted by a designated player who leads the team onto the field. Remember the hard work, precise skill and commitment that was put in behind the scenes to create the finished product.

There’s a million and one ways to prove you’re a DieHard Sun Devil.

The new hammer represents a lot of virtues within the program: strength, commitment, sacrifice and determination. The cool thing is that it’s a direct connection between the team and the fans who made it happen and the larger Sun Devil Nation they represent.

This is another example of Sun Devil Nation stepping up to build a stronger Football Program. Like Coach Griz says, the way to conquer a mountain is to break one rock at a time. That doesn’t just apply to the players. It applies to the fans as well.

There’s a million and one ways to prove you’re a DieHard Sun Devil. And a National Championship Sun Devil Nation is achieved one rock at a time. So the question is, what rock will you break? 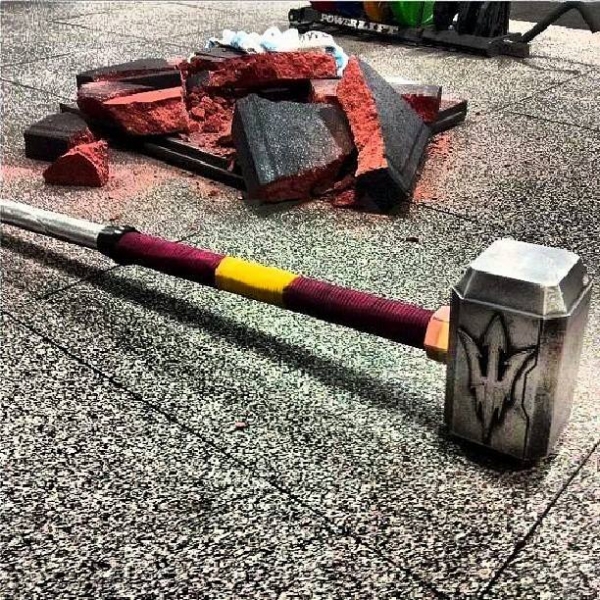 The final product created by Brock Dunlop and his team.