“.. If he puts it in the air I’m going to go get it.” That was a comment from former Sun Devil, Tyrice Thompson, about his TD catch from Rudy Carpenter in the 2007 Territorial Cup.

It’s sad to report today that Thompson’s life was cut short. He had been in the hospital since early last Sunday, after being stabbed multiple times at a popular Scottsdale nightclub. Tyrice was working as a bouncer at the time when the incident took place. Reported details of the event are unclear aside from the fact that there was an altercation. Unfortunately, the police have yet to identify the suspect.

Thompson was a former player for Arizona State Football. Upon news of his critical condition at a nearby hospital on Sunday, members of Sun Devil Nation and past coaches & players immediately expressed how well-liked Thompson was as a teammate and friend. Above and beyond all were comments about how his humble spirit and genuinely peaceful nature that had rubbed off on them. Upon news of his death today, Marques Elliott, a friend of Thompson’s since college, spoke with AZCentral -He described his friend as a gentle giant, adding he had a strong faith in God and deep love for his family. “He always was a very calm, kind individual,” Elliott said. “He’s always been extremely humble, soft spoken (and) has always had a very clear head on his shoulders. (He was) a very good human being.”-

Some of today tweets about Thompson: 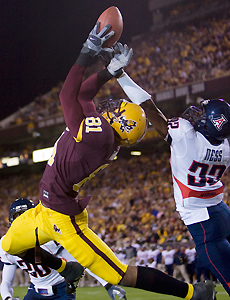 Brutal news. I covered Tyrice Thompson at ASU. Such an infectiously happy guy. He grew up so much there. RT @azcentral: bit.ly/Vvbuao

Tyrice Thompson, who died today from wounds suffered in stabbing, was key player for #ASU in 20-17 football win over UA in 2007

Just spoke w Dennis Erickson about former ASU fb player Tyrice Thompson, who passed away today. He was heartbroken,had great memories of him

“The words of his teammates, our fans and media who came in contact with him are true measures of how much his smile was appreciated.”

Thompson was a 2003 graduate of South Mountain High School in Phoenix before playing tight-end for ASU from 2004-2007. In 2006, he received the Special Teams Iron Man Award at the Sun Devils’ year-end banquet and played in all 13 games of his senior year. Sun Devil Nation’s thoughts & prayers go out to Tyrice’s family and those who knew him best. 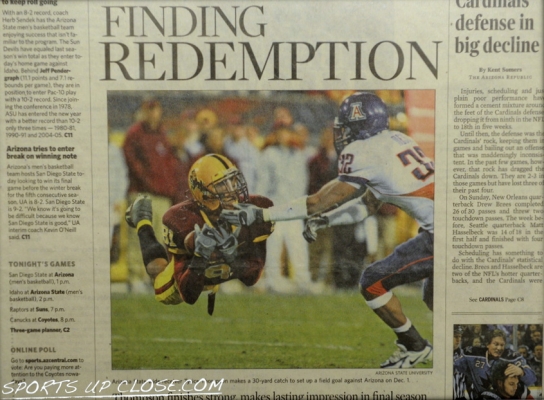