This was the beginning of the Sun Angel Foundation in 1946

If you attended Arizona State College (now Arizona State University) in 1946, you may have had mixed feelings about the new name, the Sun Devils, and mascot, Sparky. For decades the team, and mascot, had been the Bulldogs. Of course the school colors had been Maroon and Gold since 1898, when the teams had been called the Normals, after the original name of the school, the Tempe Normal School (normal was an old-fashioned term for a teacher’s college, which taught teaching *norms*). If you know your Arizona history, you know that the Phoenix area exploded in growth after World War II. And, of course, attendance of the college went up explosively, too. This caught the attention of the Chamber of Commerce, who figured that promoting athletics would be a good thing, both for the school and the entire community. And this was the beginning of the Sun Angel Foundation in 1946, which still exists to this day. It began with the Phoenix Thunderbirds, founded in 1937, who, by the way, are the hosts of the WM Phoenix Open Golf Tournament.

When the Sun Angels suggested the name of the Sun Devils, the students at Arizona State overwhelmingly approved it. A couple of years later a cheerful cartoon of *Sparky* was created by Berk Anthony, who had been an animator for Disney. Sparky remains the mascot of Arizona State University to this day, although different logos have been used, including an ASU with a sunburst, and new pitchfork, or Fork, which Nike developed with ASU in 2011.

By the way, just to be clear on this point, the Sun Devils are not just the name of the football team. Nor is it strictly the name of a person involved with ASU athletics. It’s everyone who has ever attended ASU. So, while the most athletic thing I ever did at ASU was to ride my bike to class, I’m a Sun Devil, too. 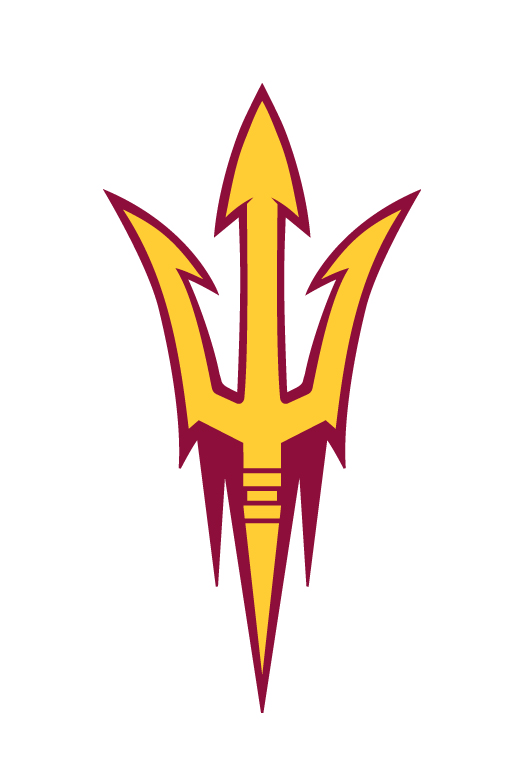 In the top photo, the small boy with the pitchfork next to Sparky is Sun Devil, Gary Richardson. Also pictured below on the left.