The Oregon Ducks received a slap on the wrist for a “failure to monitor” charge from the NCAA on Wednesday. This was the conclusion of a 27-month long investigation into the program’s recruiting practices.

In a time when the NCAA tends to come down hard on institutions that break the rules (see USC, Ohio State and Penn State), the Ducks managed to get off without much of a scratch.

As a penalty for their involvement with Texas-based scout Willie Lyles, who according to the NCAA became a booster for Oregon, the Ducks receive: A three-year probation period, lose one football scholarship for the next three seasons, a reduction in paid football visits from 56 to 37 from the 2013-2014 academic year to the 2015-2016 academic year and a ban on subscriptions to recruiting services among others. 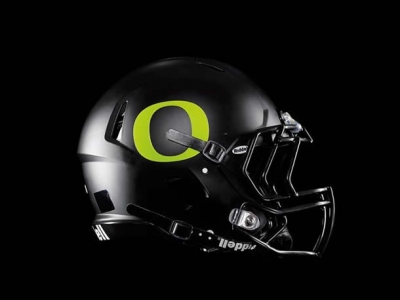 Perhaps the biggest thing to come out of the investigation is that Oregon received a “failure to monitor” charge to their program versus a “lack of institutional control.” The latter of those two can beget the death penalty.

Since Oregon didn’t get slapped with “lack of institutional control,” their penalties amount to some minor recruiting handcuffs.

Their scholarship losses aren’t substantial enough to hamper their recruiting efforts. If they had received in the ballpark of five scholarships per year until 2016 (or 15 total), now we’re talking a serious penalty.

The Ducks are banned from using recruiting services for three years and saw reductions in the number of evaluation days and paid visits allowed. And, due to the 18-month “show cause” order, Chip Kelly is effectively unable to coach in college for the next 18 months.

Notice there is no postseason ban. No financial penalties. No crippling scholarship losses.

None of the NCAA’s sanctions are going to fundamentally undermine Oregon this year or in future seasons. These sanctions won’t affect their AP or USA Today top-25 rankings; it might just knock them out of a recruiting top-25 for year or two.

Really, the biggest penalty Oregon had, the dark looming cloud of an NCAA investigation, is gone. Prospective recruits no longer have to worry about the possibility of Oregon getting a postseason ban because it’s not going to happen.

Oregon will still be a Pac-12 North and national title contender, sanctions and all. The Sun Devils skip Oregon in 2013 and travel to Eugene to play the Ducks in  2014. 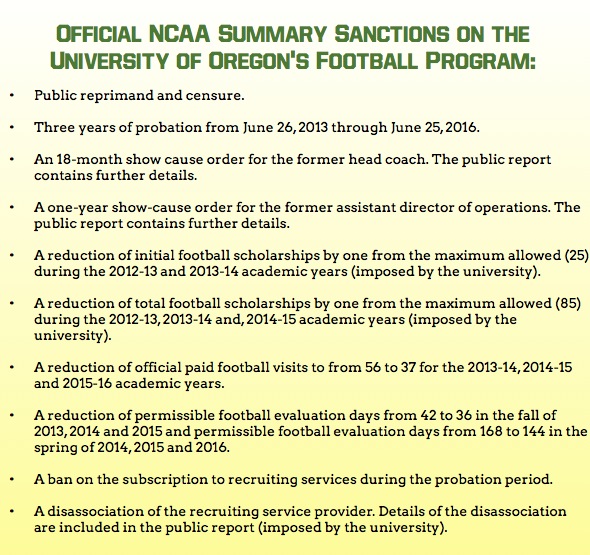 The NCAA’s Official Sanctions on Oregon

For the NCAA explanation, read here.