In a season full of small victories in the big picture of an entire football schedule, the win over Cal on Saturday was a big one.  Coach Todd Graham and the new 2012 version of Sun Devil football took an important step forward in the Pac-12 Conference and can feel very confident heading into the bye week.  From the opening kick-off, the Sun Devils were very focused and prepared at the task at hand.  Once again, ASU Quarterback Taylor Kelly was calm, cool and confident as he ran the offense systematically and stepped up when it was needed most.  Kelly finished the day 26 for 45, with 292 yards and 3 touchdowns.  At the other end of most of those passes, the two Sun Devil receivers that really stepped up their game were Kevin Ozier and Rashad Ross.  Ozier had two touchdown catches, one was a strong possession catch in traffic and the other was the go ahead touchdown in the fourth quarter.  This former walk-on has really stood out in the last two games and will be a prime target for Kelly moving forward.  Senior receiver Ross also had another big game with clear focus and effort with 7 receptions for 84 yards.  To balance out the passing game, Cam Marshall led the ASU rushing attack with a 65 hard earned yards on the ground. 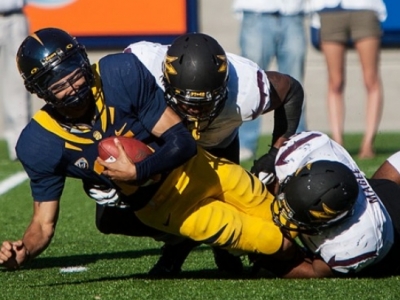 The Sun Devil defense continues to attack and had 6 sacks on Saturday.

On the other side of the ball, the Sun Devil defense continues to exceed preseason expectations and currently leads the Pac-12 in total defense.  It has become obvious after the first five games, that Coach Graham inherited and recruited some very talented players that are perfect for his new defensive scheme.  On Saturday, Will Sutton, Junior Onyeali, Chris Young, Carl Bradford and company crushed the Cal Bears with six sacks.  The defense continues to attack the quarterback, create pressure and make life a little easier on the Sun Devil defensive backs.

The only red flag on Saturday was the kicking game on special teams.  Alex Garoutte seemed to still be battling some confidence issues when he approached each field goal attempt.  If not corrected, this is an area that will come back to haunt the Sun Devils in the future.  But for now, the Sun Devils sit at the top of the Pac-12 South Division at 2-0 in the conference, and 4-1 overall.  Not a bad spot heading into the bye week and a chance for the coaching staff to evaluate the first five games of the season.