Tempe, AZ – This one had fireworks from the opening kickoff.  72 seconds into the game there was a fumble, a game ending knee injury to Will Sutton, a Sun Devil touchdown on their first play from scrimmage, a 71 yard Oregon touchdown run and a two point conversion.  After the smoke cleared, Oregon was off to the races and showed why they are one of the best teams in the country.   The Ducks dominated on both sides of the ball in front of a national television audience on ESPN, and the Sun Devils couldn’t get their “high octane” offense into gear. 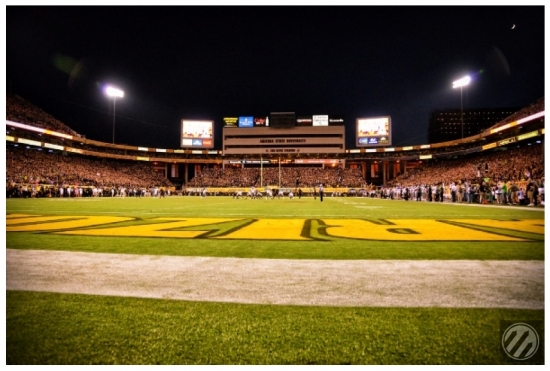 The Sun Devils lost to the Oregon Ducks 43-21. (Photo by Peter Vander Stoep for DieHardDevil.com)

By the end of the first quarter of play, the Ducks racked up three touchdowns on 233 yards on a total of 33 plays.   With early defensive injuries to Sutton, Junior Onyeali and Davon Coleman, Oregon took full advantage and ran the ball at will with plenty of speed and misdirection.  With ASU still unable to get anything going on offense, the Ducks continued to attack and finished the first half with 329 rushing yards and took a commanding 43-7 halftime lead into the locker room.

ASU received the kickoff to start the second half, but both teams went three and out on their first possession on offense.  The pace of the game slowed down considerably in the second half and the scored stayed the same until Anthony Jones returned an interception 36 yards for an ASU touchdown with 9:33 left in the fourth quarter.  DJ Foster showed some fight near the end of the game with a hard fought catch and run for one more Sun Devil touchdown, cutting the Ducks lead to 43-21.

What was supposed to be a promising evening for the Sun Devils to take advantage of a great opportunity, at the end of the day they just couldn’t keep pace with the three-time conference champion Oregon Ducks.  The injuries on defense didn’t help, reality set in and the Sun Devils got beat by a better team as they couldn’t match the speed and depth of their opponent.  Final score, Oregon 43- ASU 21.

***Attention SUN DEVILS: Post your favorite topics and connect with other DieHard Sun Devils on DEVILINK, the Social Network of DieHardDevil.com. To join the movement, take a minute to Get Your Free DEVILINK Profile NOW