Menu
WILL SUTTON – Should I Stay or Should I Go?
24
Dec

By Jeff Alba for DieHardDevil.com

Players like Will Sutton don’t come around often. #90 has the qualities that make him an exceptional defensive lineman: strength, speed, technique, mental toughness and an infectious enthusiasm for the game. Football is arguably the best “team” sport, and Sutton has those qualities that make his teammates around him play at a higher level. ASU’s 15th consensus All-American is also the type of player that has a direct impact on the outcome of a game. And proudly, Will Sutton is an Arizona State Sun Devil. 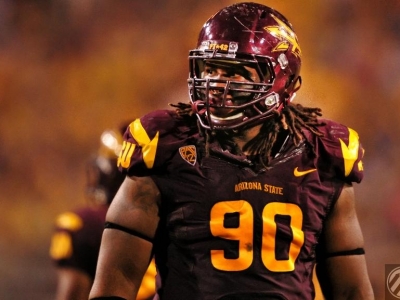 When Sutton went down with a knee injury in the beginning of the Oregon game in October, there was a collective gasp in his fellow teammates, coaches and fans that we may have just lost our biggest impact player on defense, if not the team. With Sutton out, Oregon was successful running up the middle and off the races more than once. We know how that game finished. The following week, the Devils lost by just 2 points by a last-second UCLA field goal. Sutton’s absence was the difference in the game that ultimately cost the Sun Devils the Pac-12 south crown. Then upon returning the following week at Oregon State, Sutton made an immediate impact on the Beaver’s first possession by forcing a fumble which was smothered by Junior Onyeali in the end-zone to take an immediate 7-0 lead.

With the Kraft Bowl just 6 days away, the looming question within Sun Devil Nation is whether or not Will Sutton will return in 2013. A healthy debate can be made from both sides on whether Sutton should stay or go. 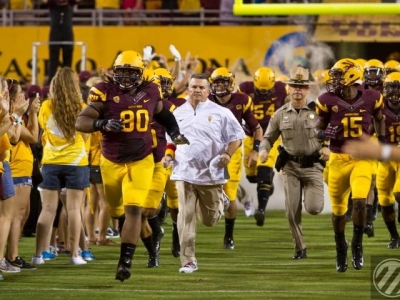 Sutton leads the Sun Devil charge onto the field.

The new Sun Devil defensive system that was instilled by CTG & Company fits Sutton like a glove. Everyone attacks the football and causes chaos for opposing offensive lineman, which in turn creates pressure, mismatches and opportunities for Sutton to get into the backfield and, let’s just say ,”disturb” the quarterback. All the pieces are in place for next season as most of the talent returns to the line. With one year of schemes already under their belt, the ASU defensive front is projected to be an even stronger unit in 2013. Also, despite all of the hardware and awards that Sutton has earned this year, he should be even better in 2013 which will generate more media attention and national exposure for himself and the Sun Devils Program.  All good things. 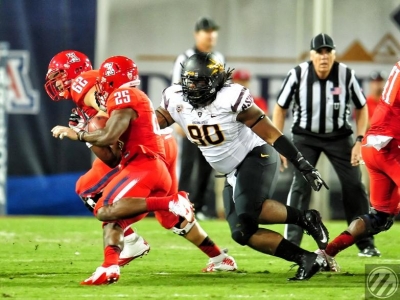 NFL scouts and teams are calling. Sutton projects to be a second- or third-round pick… Big money. As is always the case with the game, the risk of another injury in college is always a possibility. Sutton’s freak injury during Oregon’s first possession this year is an example of that. He is very fortunate that the injury to his knee wasn’t worse. Sutton has more than proved himself at the college level and has earned the right to become a professional.

In our follow-up piece, we take a specific look at the differences between being a 1st Round NFL Draft pick and a 2nd or 3rd Round pick. Let’s just say, they are significant and could very well play into Sutton’s decision to stick with his Sun Devil brothers and get his degree. If so, next years defensive line and the defense as a whole could be dangerous.

About Sutton’s choices Graham said, “I want to see him be here, but I really, truly want what’s best for him.” “I treat them (my players) just like they’re my son. If he’s going to be a first-round pick, I’m going to wish him the best. He has to do what’s best for him and his family, and I’d never want someone to do anything but that.” 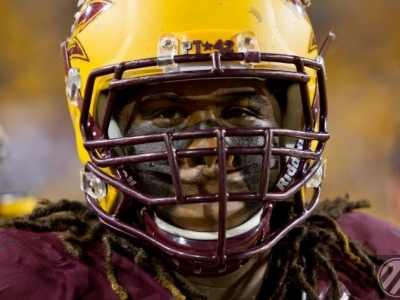 ***Enjoy the Will Sutton Photo Gallery***

UPDATE: Sutton was limited in early bowl practices because of a toe injury suffered in the regular-season finale at Arizona, but is expected to be fine against Navy. For now, let’s appreciate and enjoy #90 in what might be his last game in a Sun Devil uniform in the Kraft Fight Hunger Bowl on December 29th.

Join the discussion now on Devilink. 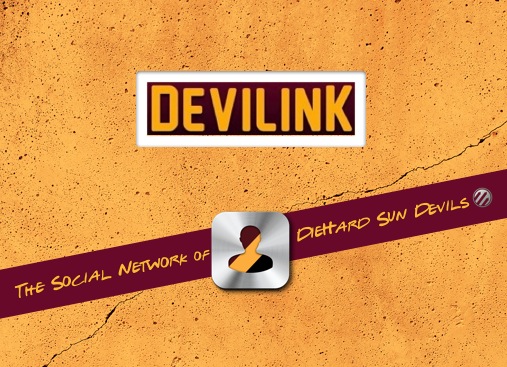