During the course of a full season, it’s safe to say that even the best of teams will at some point suffer a disappointing start to a game. On Saturday the Arizona State Sun Devils suffered that fate in a catastrophic first quarter against the visiting Beavers of Oregon State. Murphy’s Law states that if it can go wrong it will go wrong, and for the ASU offense, this was the case in the first fifteen minutes of play.  After getting off to a fast start against USC the week prior, Saturday began with mistakes and miscues that nearly cost ASU the game.  The twenty fifth ranked Sun Devils took the field Saturday clad in white helmets, maroon jerseys and white pants and appeared to be ready to roll when taking the field.  Oregon State, 0-3 heading into this game, was looking for the upset.  The Beavers came out determined to salvage their season with a huge win against a ranked opponent and came out ready to play.

Oregon State was held to a three and out by ASU’s improving defense and forced to punt.  When the ASU offense took over at the 27 yard line it began what can only be described as a nightmare scenario for Noel Mazzone’s offense.  Brock Osweiler, who had been very smart with the football to this point in the season, committed three turnovers on consecutive possessions.  The first gaffe was Osweiler picked off by Jordan Poyer at the ASU 38.  Oregon State drove the ASU 17 and had to settle for a Trevor Romaine field goal.  On the next possession, Osweiler decided to run with the ball on third down and was sacked by standout Oregon State defensive end Scott Crichton.  During the play, he fumbled the ball; his first of the year. The Beavers drive to the ASU 4 yard line but a valiant effort by the defense held Oregon State to another field goal.  The nightmare continued for the shell shocked Sun Devils as OSU took a 13-0 lead with 14:40 on the clock.

However, this was as close as the Beavers would get to victory.  The Sun Devils came alive in the second quarter, forced two turnovers on defense and forced two Beaver punts.  Brock Osweiler shook off the rocky start and led the Sun Devils down the field for two scoring drives.  Jamaal Miles added an electrifying punt return for a touchdown that put ASU up 21-13.  The Beavers made an attempt at a comeback in the third quarter, but the ASU defense stifled the Beaver passing game and escaped with a 35-20 win.  Despite the poor first quarter of play, the team was able to overcome those mistakes and played near flawless in the last three quarters, with the exception of a missed Alex Garoutte field goal at the end of the half.  The Beavers would eventually succumb to their own errors being penalized 13 times for 139 yards and committing five turnovers.

Quarterback
After having his worst performance of his career in the first quarter, Brock Osweiler settled down and had a productive night. Osweiler completed 24 of 37 passes for 258 yards and two touchdowns.  While productive statistics-wise, he was intercepted three times and lost a fumble.  While he redeemed his night leading the Sun Devils to two touchdown drives in the second quarter, his ball security issues cost him a better grade.

Not a great night for a group that is deep, fast and athletic.  Take away Gerell Robinson’s 44 yard catch, and the group did not produce the way it is expected to.  Aaron Pflugrad only caught three passes for 31 yards and was defended on several others.  Kyle Middlebrooks was the top receiver catching five passes for 49 yards and A.J. Pickens came alive and had a nice touchdown catch in his three catch 35 yard outing.  Mike Willie and George Bell didn’t put up numbers, but provided some quality downfield blocking.
Grade: C 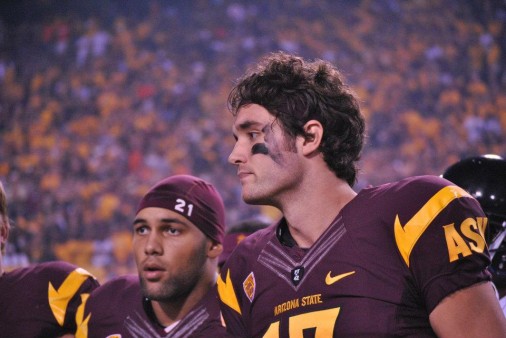 Cameron Marshall ran the ball 14 times and gained 82 yards, and for the second week made a highlight reel touchdown run.  He is still nursing a sore ankle and is not 100% yet.  Jamaal Miles did a respectable job running 6 times for 45 yards.  Miles also was lethal out of the backfield catching eight passes for 62 yards.  Pass protection was decent, but Marshall did give up a sack on an OSU blitz.

The unit lost it leader when Garth Gerhart suffered an ankle sprain in the first quarter.  Backup Kody Koebesky filled in admirably against a decent Beaver front seven.  He snapped the ball well to Osweiler in the shotgun and made the correct calls on the offensive line in pass protection.  Dan Knapp struggled against Scott Crichton who had 8 tackles and a sack.  The unit as a whole gave up three sacks after allowing only one against USC but to their credit, they were not penalized.

After coming so close to making plays in the previous four games, Jamar Jarrett was a one man wrecking crew Saturday.  The senior end had two sacks and pressured Oregon State quarterback Steve Mannion on several occasions.  Jarrett also had three tackles behind the line of scrimmage.  Will Sutton, despite being injured, had five tackles and a sack in his best game of 2011.  Davon Coleman chipped in with three tackles but also pressured Mannion on several occasions.  Oregon State only managed 47 yards on the ground and it was because this group controlled the line of scrimmage.

Oregon State threw the ball 60 times Saturday so this group was very limited in its involvement.  Shelly Lyons led the group with five tackles and broke up a pass.  Oliver Aaron, Vontaze Burfict and Colin Parker each had two stops.  Tough to grade this group because they were in pass coverage so much, but they did well supporting the run in the few times they were given the opportunity. 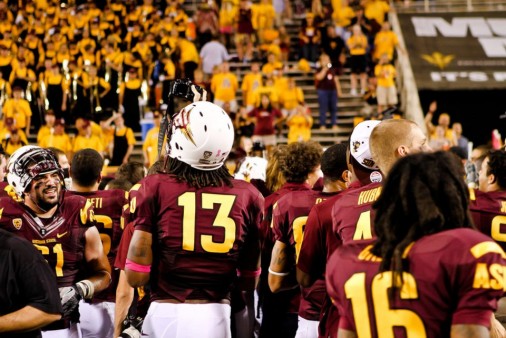 This was the hero unit of the night.  After injuries, poor tackling, broken coverages and serious doubt as to how good they were going to be this year, these guys stepped up huge.  Five different backs played Saturday and all were outstanding.  Alden Darby picked off two passes to go with his five tackles.  Eddie Elder broke up three passes and had six tackles.  Clint Floyd had six tackles, an interception and broke up a pass.  Osahon Irabor picked off a pass, broke up three others and had three tackles.  Deveron Carr, who had a slow start this season has come on strong the past two games.  Carr led the backs in tackles with 7 and his coverage was much improved.

Jamaal Miles’ punt return for a touchdown was fantastic.  He is easily one of the most entertaining players to watch in college football this year.  Alex Garoutte needs to find his mojo in field goals.  He has missed three of his last four attempts with the latest being a 35 yard attempt at the end of the second quarter.  This is an area that is still of concern.

In the end, the Sun Devils found a way to win, exorcise the demons and break another opponent winning streak.  The Sun Devils seem to control their own destiny in the Pac-12 South as they hit the road for the next few weeks to Utah and Oregon.  We will know a lot more about this team and their character, focus and talent in the next 14 days.  Should be a fun ride for Sun Devil Nation.