Winston Churchill once said, “This is no time for ease and comfort. It is the time to bear and endure.”

DieHard Sun Devil fans will be enduring much over the next seven days. In the build up to National Letter of Intent Signing Day on February 6, there are still 4-5 spots in the 2013 Class to be filled by Coach Graham & Staff. At the same time, there are one or two ASU verbal commitments who are being romanced by other schools hoping to pull off a last-minute flip. And yes, the Devils are fighting for a flip or two of their own.

Sure as gravity, key developments will unfold by the hour from this point forward. “If this guy commits, do we still take this guy?” “If we lose so-and-so, what is the best strategy with these two prospects?” “If we make this player wait another day, he will likely take his offer from so-and-so. So what’s our best move right now?” You get the point.

Maybe it will ease the anxiety just a bit to remember that amidst all of the projections, expert analysis and star-ratings of targeted players, sometimes in the end, the experts get it wrong… very wrong.

Highly touted prospects sometimes fall to the middle of the pack once thrown into BCS competition. Consider the Sun Devil’s 6’3″ WR and 4* commit George Bell (‘11-’12). The Devils beat out Nebraska in his recruitment. But Bell never delivered close to expectations and ended his two-year stay with just 27 catches for 295 yds and a single touchdown. On the flip-side we have an example like Derek Hagan (’02-’05). Coming out of High School in California, recruiting services labelled Hagan a 2* prospect. He received only three scholarship offers to play college football. Fast forward 4 years: Hagan became one of the greatest receivers ever to play in Tempe. In 2005, he finished his career at ASU with 258 receptions for 3,939 yards, the most in Sun Devil history, and 27 Touchdowns. Then he went to the league.

Here’s one more. The same year that Hagan graduated, some pretty definitive analysis was posted about a Phoenix HS player. One scouting service said the following of the future Devil, “He doesn’t project as a starting receiver by any stretch, but he’s a dependable route runner who catches the ball cleanly and could warrant a low-end roster spot.” They were talking about Chris McGaha (’06-’09). McGaha ranks 3rd 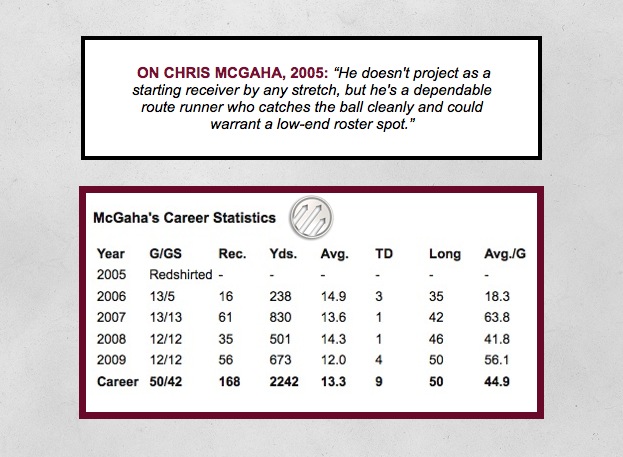 in all-time career receptions behind his predecessor, Derek Hagan, and ASU legend, John Jefferson. He accumulated 2,260 yds while playing in all 50 games of his career, finishing with 42 (great number) consecutive starts. He is one of six Sun Devils in history to record both 150 career receptions and 2,000 career receiving yards. In his time, McGaha became one of  the Sun Devil’s top third-down targets and in 2007, 72% percent of his receptions converted first downs.

A week from today, the signatures of some very talented players will come through the “master” fax machine at Sun Devil Stadium. The 25 newest members of the team will come in as equals, and all of their expert projections will soon become obsolete. Each player must prove himself all over again.

A lot of talent has already been secured in this class, and it’ll be fun watching watch develops. Perhaps one of these kids turns into a leader like Brandon Magee and changes the face of the program yet again. Who knows, maybe we’ll witness the next Chris McGaha.

Time to expect the unexpected and strap in ’till signing day. 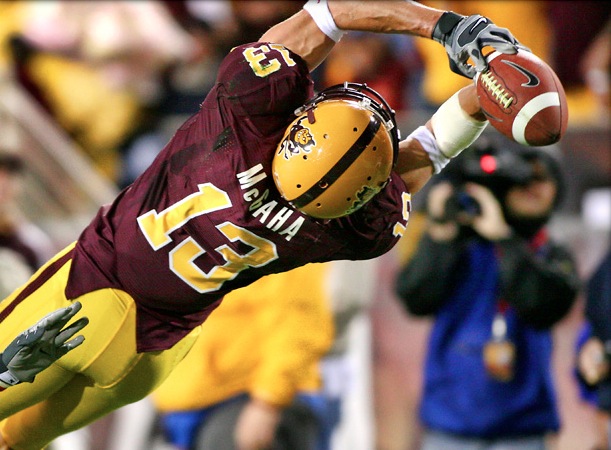 Talk about the 2013 Sun Devil Class in the DEVILINK Forums.