Surprise, AZ – #24 Arizona State Baseball took part in the 11th annual Coca-Cola Classic at Surprise Stadium over the past four days. The Sun Devils (7-2-1) emerged without a loss by beating #2 Arkansas twice, Pacific once and tying Gonzaga. 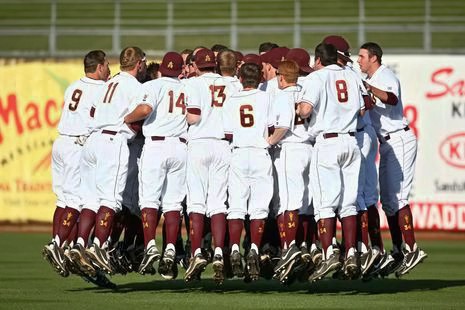 In the opening game of the tournament, the Sun Devils defeated #2 Arkansas, 3-2. Pitcher Brett Lilek got his first career start and allowed one run over five innings, with 6 strikeouts and no walks. The ASU offense was paced by James McDonald (2 RBI) and catcher Max Rossiter (2 hits). Alex Blackford and Ryan Burr closed the game out on the mound for the Sun Devils.

In the rematch on Saturday, the Sun Devils took down #2 Arkansas again, 3-1. Pitcher Ryan Kellogg gave up one run on 6 hits over six innings, with 3 strikeouts and no walks. Michael Benjamin continued his 8 game hitting streak and and Jake Peevyhouse added an RBI double. Alex Blackford closed out the game by striking out 3 of 4 Arkansas batters.

In the final game of the weekend, ASU tied Gonzaga 6-6 as the game was called early due to travel plans. The Devils led 5-0 at one point, but allowed 5 unearned runs in the 8th inning. Pitcher Adam McCreery scattered 7 hits over 5 innings with 4 strikeouts. Trever Allen and Kasey Coffman both hit home runs for ASU.

Next up, the Sun Devils face Long Beach State at Packard Stadium for a 3 game weekend series starting on March 8th.