Menu
Sun Devil Guard Luguentz Dort Reaches for the NBA
23
May
By Peter Bouloukos, DieHardDevil.com
May 23, 2019 12:53 AM
Follow Me     Follow DieHardDevilASU

(.57 Turnovers to every Assist)

The National Basketball Association had 233 players declare for the 2019 NBA Draft.  175 were from colleges and other educational institutions and 58 are international players.  In my research, I reviewed 85 players I considered at the time to be the best to fall into the first two rounds of the Draft.  I have both Zylan Cheatham and Luguentz Dort in the Top 85.

Any declaration to enter the NBA Draft does not close the door for college athletes to return to college.  Luguentz will have until May 29th, 2019 to process professional feedback from NBA Scouts before making a decision to proceed with the Draft or return to college.  They can hire an agent accredited by the NBA and NCAA. Agents are allowed to cover limited expenses such as meals and transportation, and the contract with them would need to be terminated if the athlete decides to go back to college.

Such relationships with agents have traditionally been forbidden for players in an attempt by the NCAA to preserve the concept of amateurism in college athletics. Critics say this has led to a shadowy market springing up in which players receive money from agents under the table, and this is the first year players have this flexibility.  The story of Ayton and Sean Miller come to mind, a narrative at very least the new rule is trying to prevent.

Flashback to the Commitment 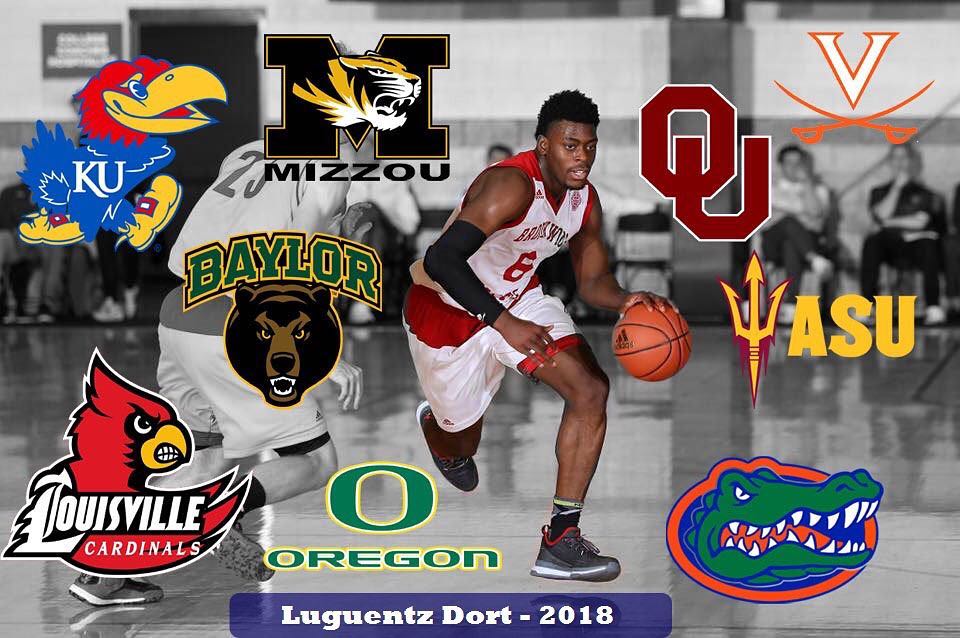 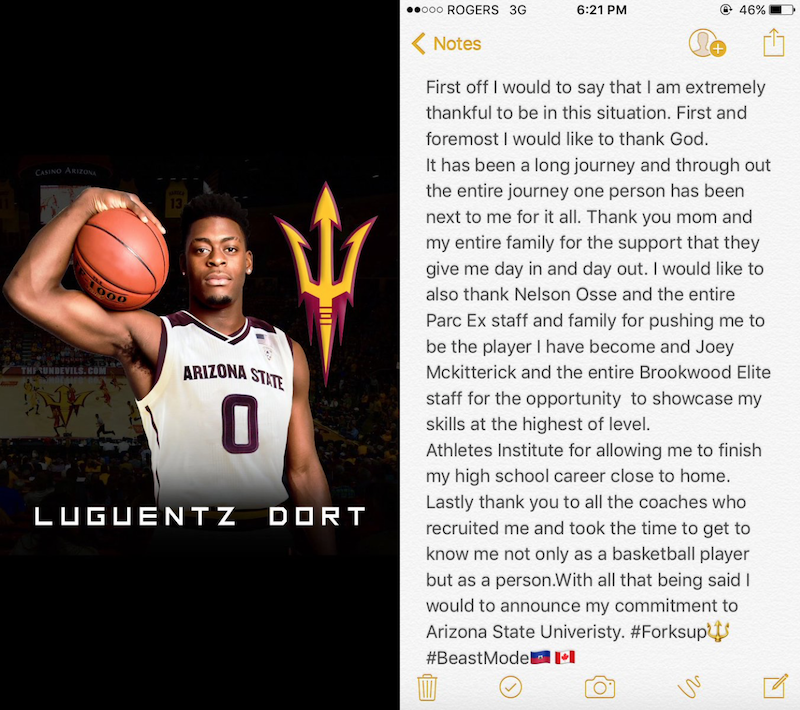 On October 18, 2017, Luguentz Dort commits to the Sun Devils

Luguentz Dort earned the Pac-12 Freshman of the Year honor while averaging 16.1 points, 4.3 rebounds, 2.3 assists, and 1.5 steals in 31.5 minutes per game.  He possesses all of the heart and talent one could ask for when considering a push towards the NBA.

The upside for Luguentz Dort is limitless.  He obviously understands arc displayed by his free throw shooting and trajectory of his long-range jump shot.  He had eight games of 20 points or more with a season-best of 33 coming against a tough non-conference matchup against Utah State.

No guard or small forward in the NBA wants a defender to stick on them like glue, and right now this is Luguentz Dort’s biggest asset.  He is physically gifted and smart. In my observation, he loves competition and will be relentless in the gym both with weight training as well as with fundamental basketball mechanics. 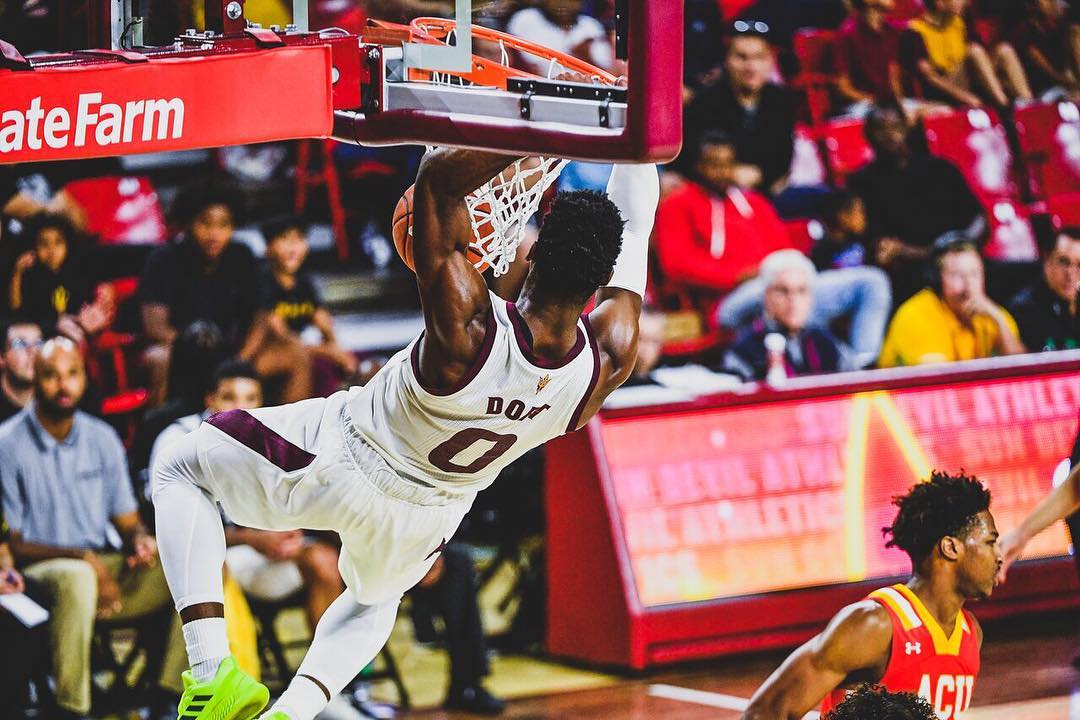 The Not So Good

Luguentz Dort does not have the playing experience nor mechanics to succeed in the NBA just yet.  He would be a draft project as an undersized shooting guard who only hit 30 percent from beyond 20’9” at the NCAA level, more than a few of his were rather slow release set shots.  He can’t stop and pop at NBA Game Speed and has struggled against longer, athletic guards and forwards.

With lack of efficiency in The Association, better, bigger and faster athletes will not allow Luguentz to get near the rim when they actually decide to play defense.  Due to his shooting mechanics, Dort was not a great finisher at the hole against college players with no chance at the NBA. His fundamentals have not served him well, and another season, if not two, would have assured him to be a top-20 pick in the NBA.

A mature Buffalo team exposed Lu, with the majority of his 12 points coming late when the game was already decided.  Luguentz shot 1-7 from beyond the arc against the Bulls. In fact, he was only 6-22 (.272) from downtown in his last four games of his Freshman Season at Arizona State.

Against Vanderbilt, Luguentz was 3-13 from the field on 1-9 from 3-point range.  Arizona State was embarrassed by Vanderbilt 81-65. Commodores coach Bryce Drew was fired after this years 9-23 campaign.

In one stretch young Dort was 7-39 from 3-point range.

Against Ivy League Princeton, Luguentz shot 12.5 percent from the field on 1-6 from beyond and 0-2 inside the arc.  An NBA prospect would drop 20 or more on that Princeton squad.

Against Omaha, the 317th ranked defense in the country, Lu Dort was 0-6 from 3-point range.  He finished with 19 points on a fantastic 7-10 from the free-throw line and a perfect 6-6 from inside the arc.

Combined against Omaha and Texas Southern Luguentz was 3-16 from beyond the arc.

Taller guards and forwards did damage from long-range and in the paint against Arizona State this season.  The Sun Devils struggled giving up offensive boards to guards in conference and Luguentz was playing over 30 minutes a contest.

In one Pac-12 stretch, a down year for the Conference, Luguentz had 15 turnovers and was just 3-18 from behind the arc (Oregon, UCLA, USC).

Utah shot 53 percent from distance in an early season 96-86 upset of ASU.  Undersized guard, 6’3” 180 pound Parker Van Dyke shot 57 percent from range, had 3 rebounds and 3 assists in 21 minutes.  6’7” small forward (225 pounds) Donnie Tillman was 6-8 from deep, with 3 offensive boards and 6 assists. Sophomore Tillman has an NBA body and averaged 10 points a game, Freshman Van Dyke does not and averaged 8 per night.  This is all “Food for Thought” of course, but where was Luguentz on defense?

Luguentz and Jaylen are both mid-second round draft projections and both may not make the top 60.  Jaylen was 37% from long-range to Dort’s 30.7%. Now, for two true-point guards, Dort had 79 assists on 99 turnovers.  Hands had 201 assists on 105 turnovers. Who is the better NBA prospect via this perspective? 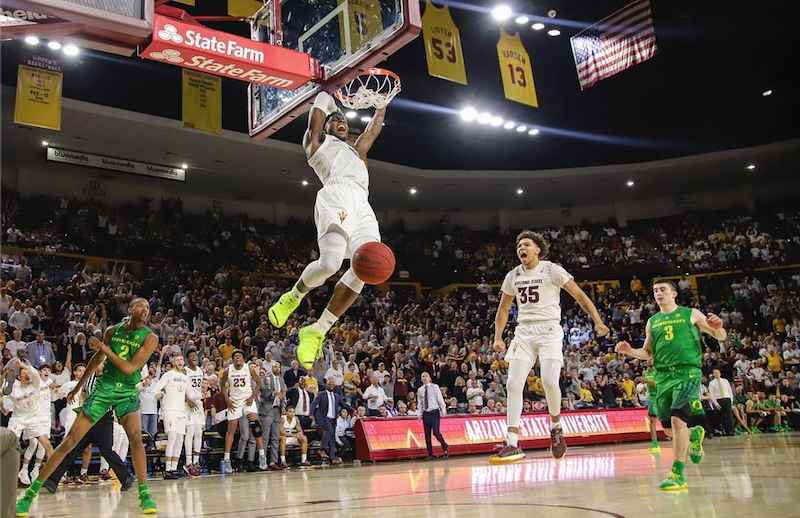 Early in the 2018-2019 season in Tempe, Luguentz was projected as a high 1st Round Draft Pick.  Some even suggested he could be a Lottery Pick. But current predictions have him going in the second round, and some still have him as not being drafted at all.

The Pac-12 Conference has a number of savvy guards coming back who can score and play defense.  Quite a few more have declared. Luguentz Dort still has considerable work to do, and it would break my heart to see him fall short of his true potential.  Lu is not even the best Pac-12 guard or power forward in the draft pool, and in my humble opinion, a few Pac-12 Freshman who have declared will be drafted before him.

Luguentz is an undersized shooting guard who will struggle to get shots off at NBA game-speed from beyond the 3-point line.  He has a slow-release-set-shot. He also has a tendency to collect himself or square up flat-footed and sometimes off his heals.  That habit alone is a recipe for erratic shooting, which was on display in Luguentz Dort’s Freshman campaign.

Lu has suggested he is going to be a point guard in the NBA.  His size certainly dictates this. Lu said: “I know I can become a good leader on the court and create for my teammates” while at the combine in Chicago.  Dort never displayed a steady handle of the motion offense, easily the least complex offensive bases in basketball today.

Recall how many offensive charges, turnovers, and missed layups Dort had as a young-talented freshman.  The pundits believed the Pac-12 was down this year which takes a little luster off Luguentz stats, but Dort had 8 turnovers against Texas Southern, and how many NBA athletes do the Tiger’s have? 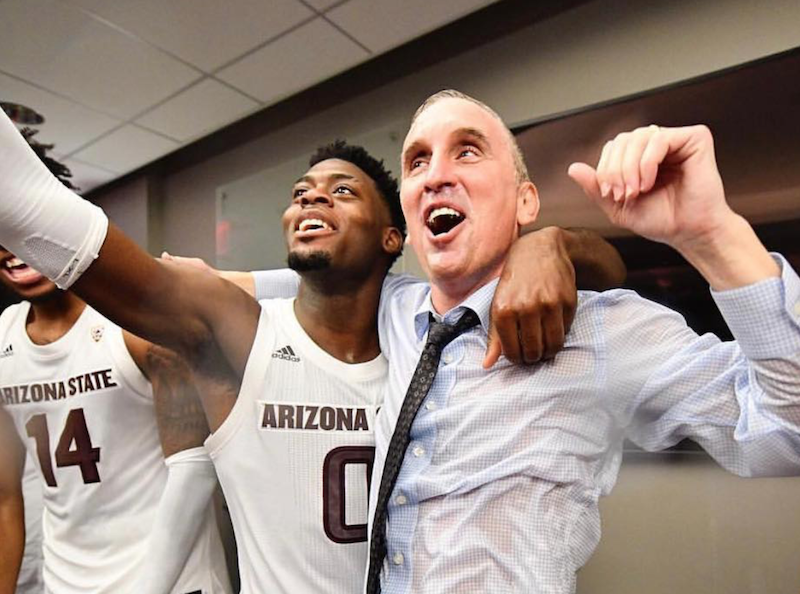 Luguentz had 1.26 turnovers to every 1 assist.  So for every 2 points, his passing might score, he potentially gives up 2.5 points.  In Golden-State’s Game 4 Victory to sweep the Blazers, they had 30 assists. Let’s say each assist scored 2 points. Via assists Golden State scored at least 60 points.

Statistically speaking, if Luguentz Dort created all 60 points as a true point guard, the Warriors would have surrendered as many as 75.6 points on the other end of the floor (if each turnover resulted in 2 points).  The Warriors only had 15 turnovers in an off shooting night but swallowed up 56 rebounds!

When reflecting on Luguentz’ decision to come out early, Sun Devil Jahii Carson comes to mind. Carson played two fantastic years under Coach Herb Sendek but needed another year, if not two, to develop.  Carson was an excellent ball-handler and could score all-over the floor as a true point guard.  Carson couldn’t hold bigger guards on the defensive end. 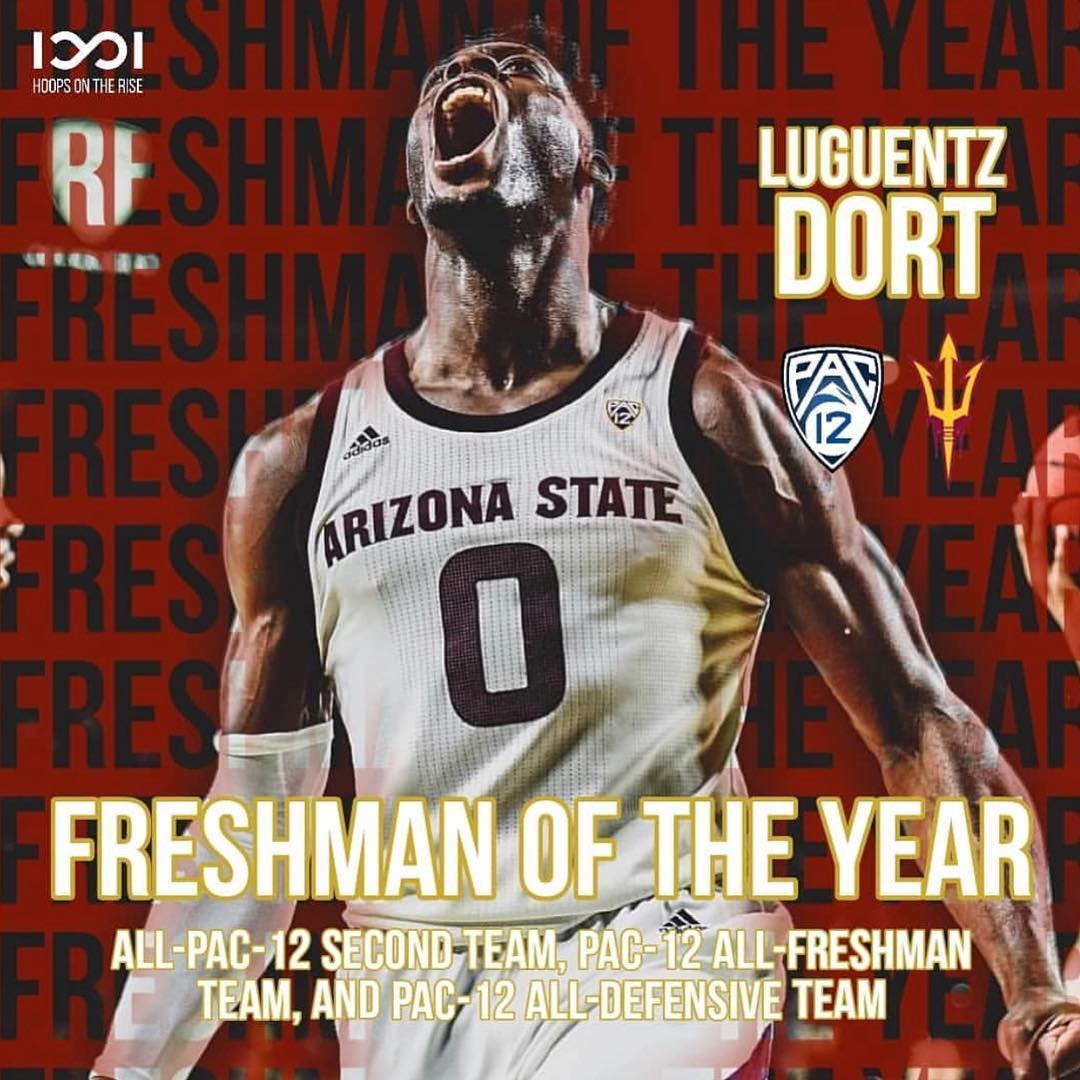 Coach Hurley could have put Luguentz in a position to become a legitimate NBA player given another summer or two. 6’3” Guards have to be able to distribute as well as score from beyond the arc. Lu just doesn’t bring a complete package despite all of his inherent gifts, and the emphasis in the NBA is scoring and moving the ball, not defending it.

Unfortunately, because of the reasons explained above I look for Luguentz Dort to land in the G League or overseas with Tra Holder, Shannon Evans and Kodi Justice. The last player from Arizona State to be drafted in the NBA was Carrick Felix in 2013. Carrick went in the second round (33rd overall) to the Cleveland Cavaliers.  He played in a grand total of 7 NBA games.

Coach Bobby Hurley has signed two good guards that could receive some solid playing time,  Jalen House out of Shadow Mountain High School and Alonzo Verge out of Moberly Community College in Missouri.  Taeshon Cherry is going to have a huge summer in the weight room, and Kimani Lawrence showed great progress this year. Rob Edwards will return and is poised to have a monster year with 430 field goal attempts opening up with Dort’s departure.