Jahii Carson and Jordan Bachynski were the only active players on a large amount of possessions, challenging the Wildcats to defend a two-man game. Sean Miller’s team, a group that leads the Pac-12 in point differential and scoring defense, threw different looks at Carson and co., but it ultimately was not enough to turn down the heat in Tempe. 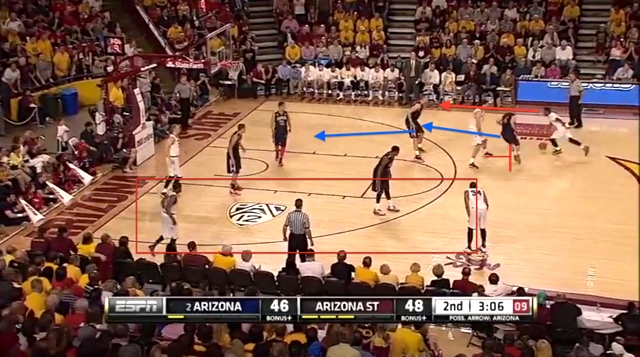 Late in the second half, Bachynski sets a screen above the three-point line for Carson on the right wing. As commentator Bill Walton noted during the game, “Carson likes to go to his right.” Bachynski fails to set a good screen during this play, so Arizona point guard TJ McConnell is able to go over and stay with Carson. Arizona center Caleb Tarczewski initially commits to Carson as well. 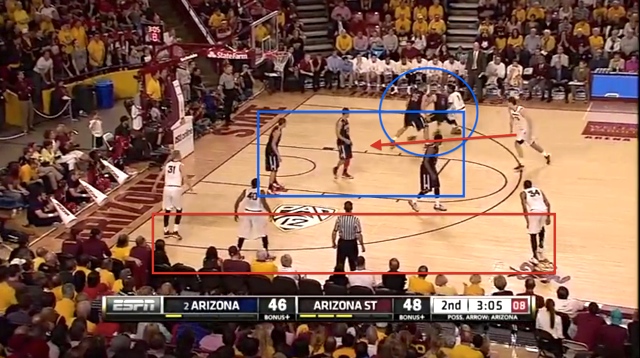 Since McConnell was able to fight over the screen, he is able to get ahead of Carson and stop his progress. Tarczewski slides over to defend the rolling Bachynski. Notice how the remaining three Sun Devils are stacked on the opposite side of the court. 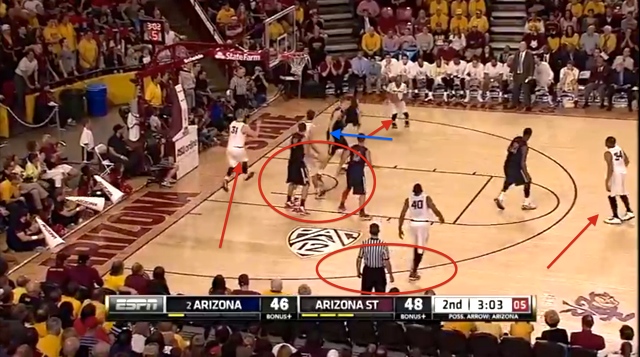 Carson is able to push McConnell almost to the baseline, using his quickness to force him off balance. Gilling cuts to the hoop, ensuring that Carson has a one-on-one matchup. Bachynski remains in the middle for the same reason. Jahii throws down a nasty shake and bake and steps back for a jumper. 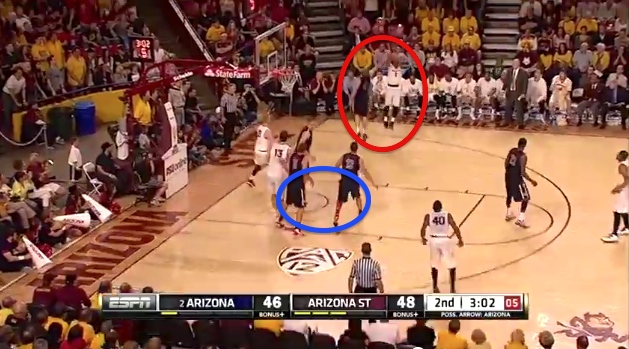 The Sun Devils are able to turn a screen and roll into an isolation situation for their best player, Jahii Carson. Notice how the other four Wildcat defenders are not even on Jahii’s half of the floor. Carson’s dribbling ability allows him to create space and knock down the rainbow jumper. 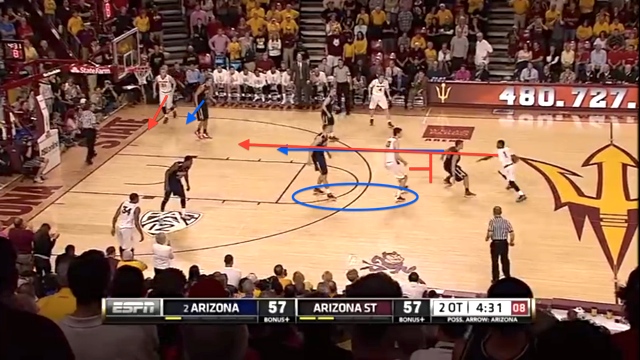 Here Bachynski sets another high screen for Carson, this time more towards the center. Bachynski doesn’t stop Carson’s defender, but the screen is high enough that Carson can build momentum on his way to the basket. On this play, Tarczewski stays with Bachynski the entire time, leaving Carson an open key to drive into. 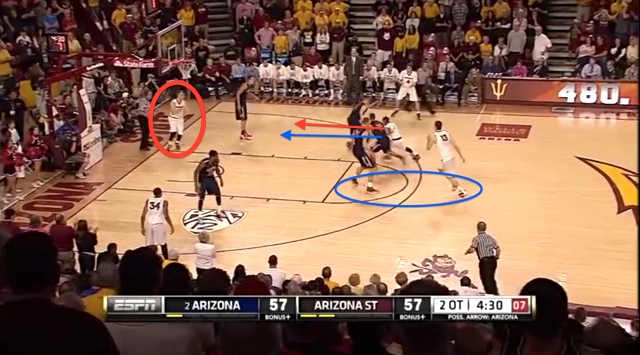 Gilling is initially open after cutting to the basket from the right corner. Carson has his head down and never sees him. Despite Bachynski’s position, Tarczewski stays with him. This is a mistake on Tarczewksi’s part. JB is useless from anywhere outside six ft of the basket. He doesn’t need to be guarded out in three-point range. At this point, Carson has not passed his defender. 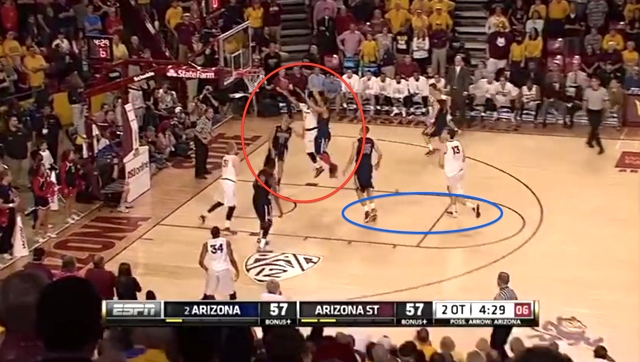 Since the screen is set high, Carson turns on the jets and has more room to speed past his defender. He uses his body to get an unchallenged layup. Gilling’s defender, Nick Johnson, is too slow to cut Carson off. 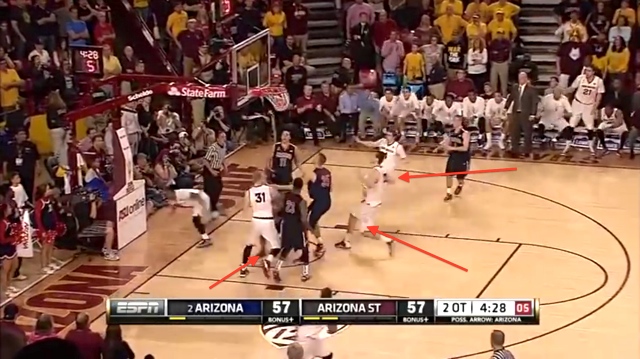 Carson converts the layup. The Sun Devils crash the boards for a potential miss. 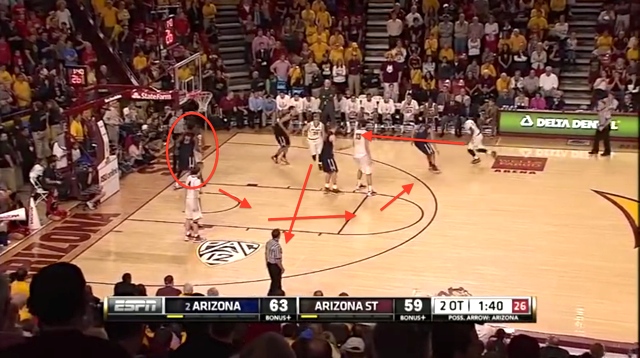 Herb Sendek drew up this brilliant play out of a time out late in double overtime. Jermaine Marshall starts below the basket and circles to the right wing as Jonathan Gilling horizontally to the left wing. This misdirection is designed to give Carson space on the right side and free up Marshall. 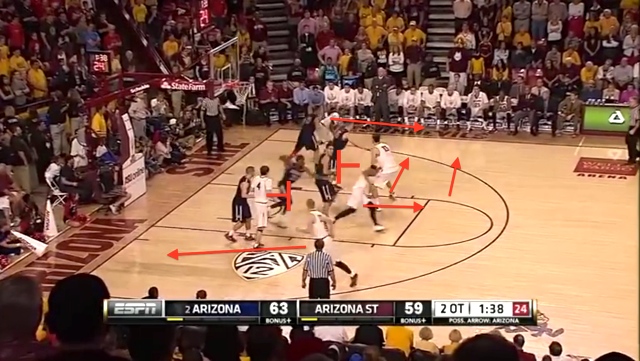 Bachynski set the play in motion by screening Marshall’s man as Marshall moves to the top. Carson dribbles to the corner before turning and dribbling towards the right wing as Gilling cuts to the corner. Barnes screens Gilling’s man. 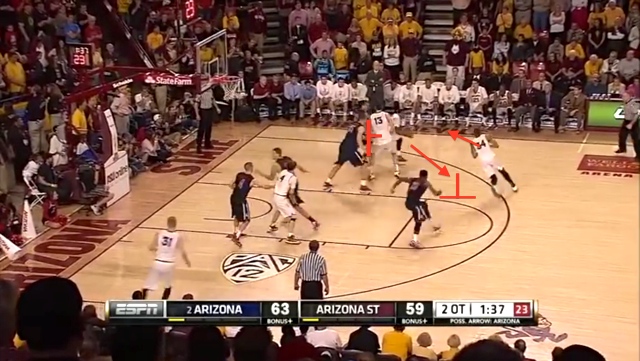 Bachynksi then transitions to Carson’s man, screening him near the three-point line. Carson then hands off to the curling Marshall, screening his man in the process. The misdirection frees up Marshall for a good look. 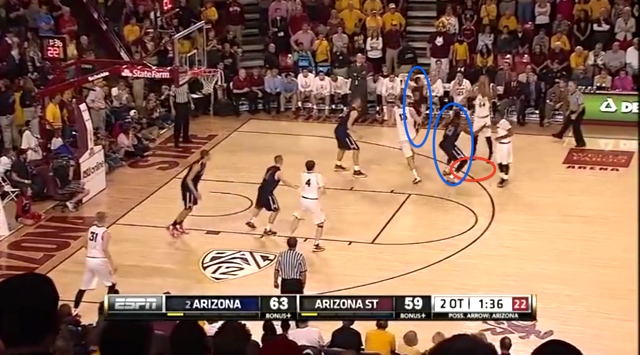 Notice the distance between the two defenders and Marshall as he hoists the clutch trey. This is created by Bachynski’s multiple screens and the Carson handoff. Marshall splashes it and swings the momentum back towards the Sun Devils.

Arizona State was able to use high screens to create favorable situations for their two best guards. This allowed Carson (17 pts) and Marshall (29 pts) to lead the Sun Devils to a victory in double overtime.