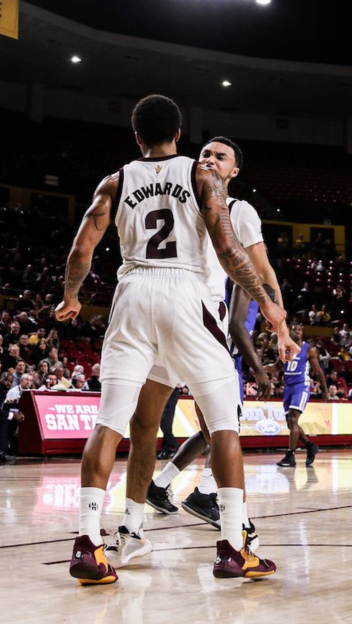 Did you know a basketball shot with a flat 35-degree arc only has a 6/10th of an inch margin of error to clear the rim and find the net?  Line drive shots have to be almost perfect to tickle the twine. Enter Rob Edwards with a 45-degree medium height arc and another off-season of physical training with Sun Devil Hoops.

Rob Edwards’ balance, release and follow through provide his jumper a 3-inch margin of error, and it showed in the first half Thursday night. Edwards was 5-7 from beyond the new 22’ 1 ¾” arc in 20 minutes.

After finishing second among all scorers (20 points) in the Sun Devils China game (a loss to Colorado), Senior Guard Rob Edwards put up 23 points Thursday night. He added 4 rebounds, an assist, and a steal along with 5-9 shooting from behind the arc. Rob is extremely efficient, now averaging 21.5 points per game on 60 percent of his 3-point shots. “Most of the time the teams leave me open,” said Edwards. “So I just let it fly. Especially off the drive-and-kick, that’s a shot I’ve got to make.”

The Blue Devils (0-3) went more than 5 ½ minutes without scoring in the first half but trailed by just seven, 26-19, after a three from Guard Zach Newkirk.  Arizona State scored the next nine points, including a powerful flush by 6’ 9” 205-pound Freshman Center Jalen Graham with 2:43 left.

Graham again played with purpose going 5-7 for 10 points while adding 4 rebounds, 3 steals, an assist, and another blocked shot on his resume.  Graham is shooting 72.7-percent from the field providing Sun Devil Guards with an option around the rim.  One of his three assists was to a perfectly squared-up and set Rob Edwards resulting in a beautiful inside-out 23’ 3-point shot.

CCSU Freshman Greg Outlaw’s had nine points and led the Blue Devils. Central Connecticut has 10 players in their first year with the program and has a total of 11 underclassmen.

Remy Martin seems to be picking and choosing his battles in the first two match-ups.  Remy came out running in the second half, scoring 12 of his 14 points, and helping the Sun Devils score forty-seven more in the final twenty minutes. It was a dominant 41-point victory (90-49).

The presence of “The Big Fundamental” Romello White (11 rebounds, 3 blocks) was important after the 6’ 9” Junior Forward missed the season opener in Shanghai for team rules violations.

After allowing 81 points to No. 25 Colorado on opening night, ASU locked things down in the backcourt. The Sun Devils limited the young Blue Devils to just 17-57 from the field (29%). Along with forcing 23 turnovers, the Sun Devils had 5 blocked shots and 14 steals.

White added: “We really held them down. There probably hasn’t been a ton of games since I’ve been here that we held a team under 50 points, you know no matter who you’re playing it’s good.”

The Good, The Bad

At DieHard Devil we have stressed how important the volume of newly available shots are as a result of Luguentz Dort’s departure. The Beneficiaries? Rob Edwards, Taeshon Cherry, Kimani Lawrence, and Remy Martin. Those four returning Sun Devils are shooting 44 percent from beyond the arc, admittedly driven by Edwards accuracy entering game 3 of the campaign.

HOWEVER, Alonzo Verge Jr. is shooting zero-percent from beyond the arc, and Jaelen House is 12.5 percent. Combined, the two guards are 1-15 from deep. Now add 9-25 from inside the arc, and our two new guards are volume shooting as Dort did. But it’s early in the season. 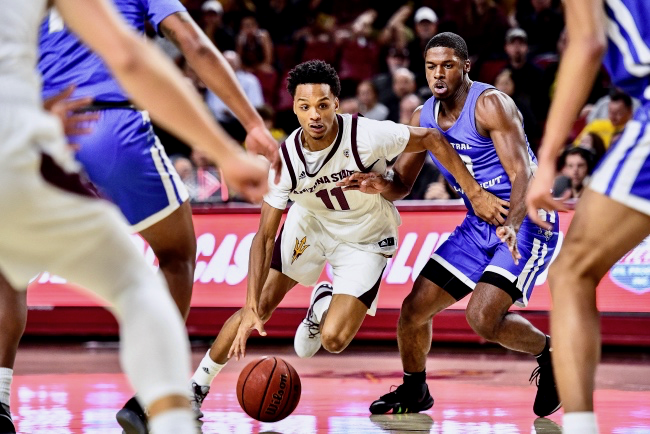 House and Verge Jr. are a combined 10-40 from the field.  Edwards, Lawrence, Martin, and Cherry are 34-71 from the floor, shooting almost 48 percent. Jalen Graham is 73 percent, and with 1 shot, Romello White is batting 1,000%. It’s also notable to add that Freshman Guard 6’1” 180-pound Caleb Christopher showed a nice stroke going 1-1 from distance.

Simply stated, House and Verge Jr. have to make better decisions. Pass first, shoot second and contribute defensively. They are getting a combined 48.5 minutes per game. Jaelen House is 28% in Efficiency Field Goal Percentage, and Verge is 23%. To be a contender, the Sun Devils do not have good enough rebounding to afford a longer learning curve from these two young contributors.