Twelve years is a very long time.  Twelve years ago Bill Clinton was still the President.  Twelve years ago no one knew what an iPhone, Blackberry or Android was.  Twelve years ago Windows98 was the technology that was used on computers and America Online was how most people surfed the internet.  That was the last time ASU had beaten the University of Southern California…November 1999.  Over the next eleven seasons, the Sun Devils just couldn’t defeat the Trojans although in 2009 and 2010 they came very close.  If there was ever a time that this hex could be broken it was on Saturday.  USC is no longer the titan of the new Pac-12 conference.  That title has been taken by Oregon for the time being.  USC no longer has the mystique or aura to them like they did under the Pete Carroll regime.  After a coaching change, scandal, probation and scholarship reductions the men of Troy have been relegated to mortal status.  Arizona State had every reason to want revenge after two close losses to the Trojans the past two seasons which the Sun Devils should have won, and coming off a tough loss at Illinois.  The stage was set.

ASU took the field in their new all maroon look and from the first series made it clear to the visiting team that they were not going to allow history to repeat itself.  After Brock Osweiler evaded the Trojan rush and ran for a first down the Sun Devils struck first.  On the very next play, Cameron Marshall lit up the stadium as he ran around the left side of the line and sprinted into the end zone after breaking a tackle for an early 7-0 lead.  The defense finally turned up the heat and held the Trojans to three field goals in the first half.  Osweiler again showed why he is a rising star in the conference by completing two touchdown passes and leading ASU to a 21-9 halftime lead.  USC, not to be deterred, stormed the field in the third quarter and managed to wrestle the lead away from the feisty Sun Devils after a Marc Tyler scoring run from 10 yards.  This gave USC a 22-21 advantage with 6:41 left in the third quarter.  We had watched this scene play out before in past years.

But 2011 was different.  That was as close as USC would come to victory.  On a wild Tempe night where a crazy wind storm struck the stadium in the first quarter bringing dust, rain and a large amount of trash on the field, the Sun Devils would flip the script.  The desert storm served as an ominous sign for USC as it happened during one of their offensive drives.  As the brown, dusty rain fell it was as if the hex was being reversed by the Arizona State Gods.  It stained USC and baptized Arizona State.

This new mojo became evident when USC took the lead.  The Sun Devils, rather than panic, break down and make mistakes that would cost them, played with an inspiration and attitude that will be remembered for quite some time and earned a huge victory.  USC managed to move the ball into ASU territory twice but came up short due to turnovers.  Matt Barkley fumbled on a sack that was recovered by Bo Moos and Marc Tyler fumbled when hit by Colin Parker that was recovered by Deveron Carr.  Shelly Lyons then iced the game late in the fourth quarter by intercepting Barkley and scoring his first ASU touchdown.  Final score ASU 43 USC 22.  After twelve seasons it was sweet revenge for the Sun Devils. 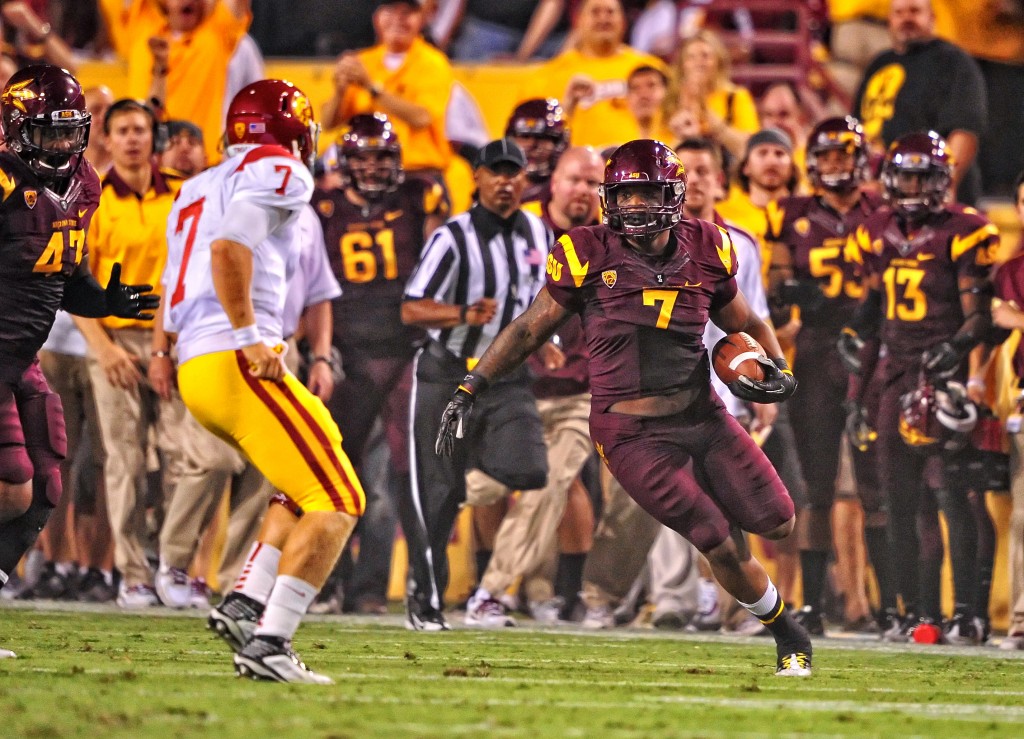 Quarterback
Brock Osweiler continues to impress.  Every week he is improving and it shows in his performance.  Oz went 26-32 for 232 yards and two touchdowns.  He ran the ball with authority when it mattered and kept drives alive.  The best stat of all….NO TURNOVERS.

This unit had a much better outing after having several drops last week.  Mike Willie had his best game of 2011 catching four passes for 44 yards and provided some quality downfield blocking.  Gerell Robinson had a big drop which he answered with a huge catch in the second quarter.  G-Rob finished the day with three catches for 32 yards and scored a touchdown.  Aaron Pflugrad was smothered by the USC defense but still managed to grab four passes for 39 yards.  A.J. Pickens only caught one pass but it was a huge 21 yard gain.

Cameron Marshall finally had his breakout performance.  Marshall carried 25 times and gained 142 yards.  He averaged 5.6 yards per carry and scored on the first play of the game.  Still not 100% healthy, the bruising Marshall was a force that was instrumental in ASU’s win.  Kyle Middlebrooks chipped in with two carries for nine yards.  After three games in which ASU’s run game was a non factor it showed up huge Saturday.  Catching the ball out of the backfield was big for this group.  Jamal Miles caught nine passes for 55 yards and a touchdown. 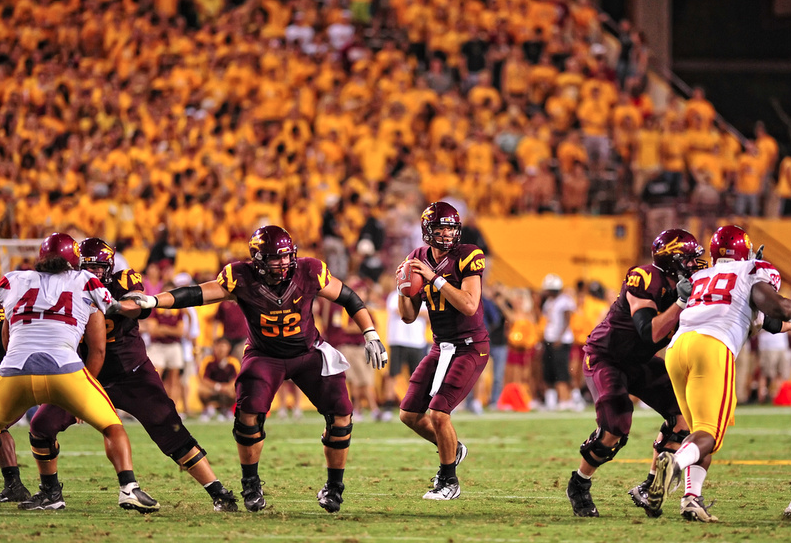 Brock threw 26 of 32, 232 yards, 2 Touchdowns and No Pics. He brought his Offensive Line with him to the press conference table following the game.

Finally the unit was able to do both; pass block and run block.  The maligned group made a statement Saturday in controlling the Trojan front seven.  After allowing six sacks the week before, they only gave up one sack on a blitz.  The unit was penalized once on Mike Marcisz’s illegal block penalty.  Tackle play was much better as Dan Knapp and Evan Finkenberg kept the quick USC ends off Osweiler.  The interior line held up much better which allowed Osweiler to see the field and not have to vacate the pocket.  They were finishing blocks in the running game which opened the door for Marshall to have his best game to date.

Davon Coleman continues to impress while filling in for the injured Junior Onyeali.  Coleman again was very active on the front line with five tackles.  Bo Moos had a huge game by sacking Matt Barkley then recovering a Barkley fumble later in the game which stalled a possible touchdown drive.  Will Sutton had three tackles as did Corey Adams.  Greg Smith came off the bench and had a sack as well as forced fumble of Barkley.  This unit gets better each week.  Stopping the run is still a concern as Marc Tyler ran for 152 yards but they came up with huge plays when it mattered.

When a running back gets 152 yards it’s not a good thing but this unit, like their defensive line brothers, made huge plays when the game was on the line.  Vontaze Burfict intercepted Barkley which stopped a possible Trojan touchdown in the second quarter and had five tackles.  Colin Parker is emerging as ASU’s most productive linebacker by having another strong performance.  Parker had seven tackles and forced a fumble.  Shelly Lyons came up huge for ASU in the fourth quarter intercepting a Barkley pass and returning it 41 yards for the game clinching touchdown.

Osahon Irabor grew up Saturday.  He made some big hits in the second half and covered very well to go with his five tackles.  Deveron Carr also had his best game and made some big hits in a six tackle one pass breakup effort.  Eddie Elder was a warrior coming off an injury last week to play and make four tackles.  Clint Floyd led ASU with eight tackles.  The unit had the unenviable task of stopping USC star Robert Woods and while he had 8 catches for 132 yards he was kept out of the end zone.

No missed PATs but coverage units need to improve is this team is to compete for a Pac-12 championship.  Josh Hubner has been mostly effective when called upon averaging 49 yards per kick.  For the most part, Alex Garoutte has been sufficient on kickoffs, but had one sail out of bounds for a penalty. 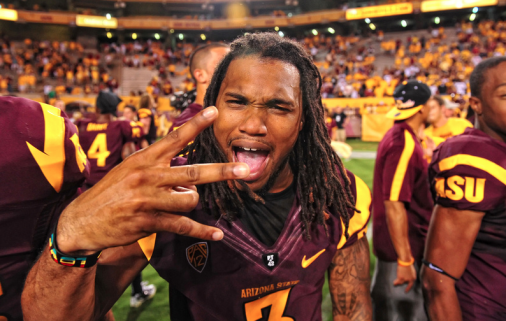