Early on tonight in Tempe, the Sun Devil offense was unstoppable in the first quarter racking up 193 yards of total offense and two touchdowns. It should have been three scores, but Cameron Marshall fumbled during the first drive on the one yard line.  The offensive assault continued in the second quarter as the Sun Devils scored two more touchdowns and drove down the field at will on the Illinois defense. 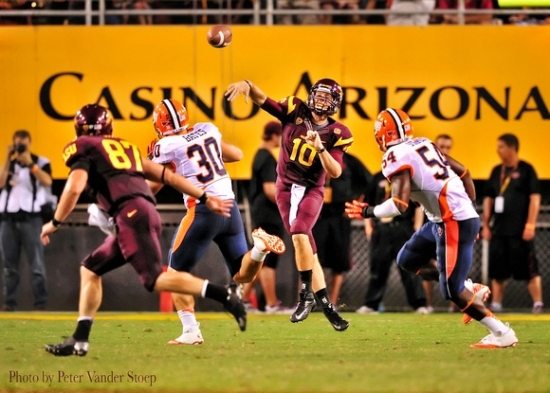 The Sun Devil defense did their part in the first half by containing the Illinois offense and limiting them to 185 total yards and only one score. In Brandon Magee’s absence, true freshman Carlos Mendoza led the defense had two interceptions in the first half. The Sun Devils finished the first half with 15 first downs, 82 yards rushing and 241 yards passing. Chris Coyle led the offense with 101 yards and two touchdowns.

The momentum continued into the second half as Alden Darby intercepted an Illinois pass on their first series and returned it for 34 yards. The Sun Devils scored two plays later on a one yard run by DJ Foster. Illinois fought back with 4:02 left in the third quarter and scored on fourth and goal to cut the ASU lead to 35-14. The scoring pace slowed down in the fourth quarter as Alex Garoutte made his first field goal of the year and Michael Eubank scored the final Sun Devil touchdown to make the final score 45-14.  ASU finished the game with 510 yards of total offense.