Menu
TEAM CHEMISTRY: The Strength of ASU Baseball in 2013
29
Jan

Tempe, AZ –   This afternoon, ASU Baseball held their annual media day at Packard Stadium, and words like “National Championship” and “Omaha” were mentioned multiple times and nobody batted an eye.  Those confident words are commonly used every year for a program that has won 5 national titles, has been to the college world series 22 times and also has the third most alumni to play in the Major Leagues.  Combine that with the Sun Devils coming off probation this year, and a return to Omaha and the shot at another national title is once again the goal in Tempe. 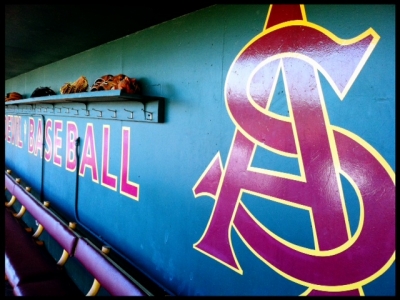 Head Coach Tim Esmay will lead Sun Devil Baseball for the fourth year, and both the players and coaches seem focused and ready to take care of business.  And although ASU isn’t included in the Top 10 preseason rankings, Esmay was quick to point out that, “I would rather be ranked #1 at the end of the year instead of the beginning of the year.”  Makes sense.

The other phrase used frequently today was “Team Chemistry.”  Players were talking about how strong the chemistry is among all the players on the field and in the clubhouse.  And that includes the new freshman, who will be expected to contribute this year. 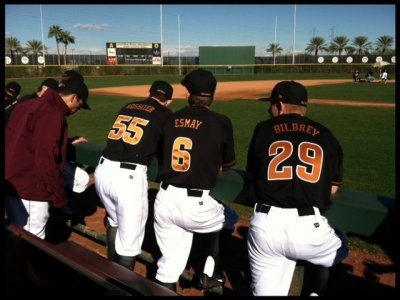 Esmay will get some leadership help from Junior pitcher and All-American Trevor Williams.  Williams was 12-2 last year with a 2.05 ERA, and will take over the Friday night ace role in the rotation.  He will be the anchor for the remodeled pitching staff in 2013.

The Sun Devils will also have some veteran leadership behind home plate.  Senior catcher Max Rossiter will handle the 2013 pitching staff that will include a mix of upper classmen and some newcomers.  His experience will be a welcome requirement for Esmay.

Other players that now have another year under their belt and will contribute in 2013 include infielders Michael Benjamin and James McDonald, along with pitchers Adam McCreery and Matthew Dunbar.

Three of the top newcomers on the Sun Devil roster are pitchers, which is an area that needed to be reloaded after losing Brady Rodgers and Jake Barrett from the staff last year.  The new Arizona State arms include Ryan Kellogg (LHP), Brett Lilek (LHP) and Ryan Burr (RHP). 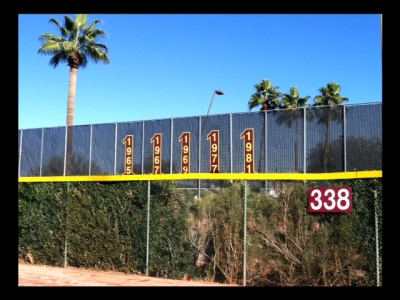 As usual, the Sun Devils have loaded up another tough schedule in 2013 that includes Arkansas, a trip to Tennessee and Wichita State, to go along with the grind of the challenging Pac-12 schedule.  Esmay also added, “The Pac-12 games are like playoff baseball and prepares you for the postseason.”  There will be plenty of competitive action to witness at Packard Stadium in the spring.

Finally, Esmay added that the Sun Devils, “are going to run a lot and put pressure on the other team” and will continue to play aggressive baseball.  When asked to describe the 2013 Sun Devil baseball team in one word, Esmay took a pause then answered, “relentless.”

ASU will hold their annual alumni game on February 9th at Packard Stadium.  Gates will open at 11:00 AM and admission is free to the public.  The 2013 season opener is Friday, February 15th against Bethune-Cookman in Tempe.