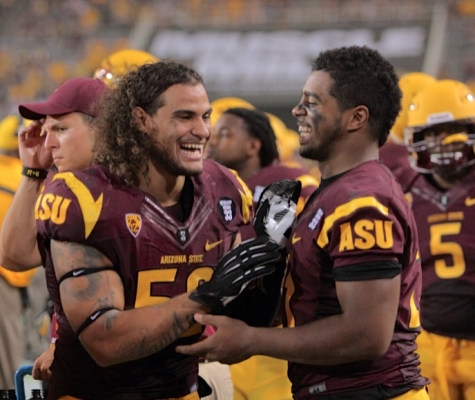 Tempe, AZ – The Sacramento State game is in the books and the Sun Devils have their first victory of the season 55-0.

As mentioned in the DieHard Storyline beforehand, the first game was a tune-up for the next “Big 4” on the 2013 schedule.

We also saw game one as an opportunity to keep a close eye on the new Sun Devil talent and who would step up, determining a more specific depth chart and installing the ASU defense for the upcoming 4 game stretch.

New Sun Devil Talent (How did they do?)

“With so many new faces expected to make an impact on both sides of the ball, it’s important to get these players meaningful reps under the big lights. This game provides players an opportunity to state their cases for playing time.” – DieHard Storyline

The immediate name that stands out is Jaelen Strong. Strong played his first game at Sun Devil Stadium like he had been there 100 times before (4 catches / 65 yards/ 16.3 avg). He played with a quiet confidence, caught almost everything that Taylor Kelly threw his way, including a 26 yard physical, jump ball in the end zone for his first ASU touchdown.

De’Marieya Nelson also started with a bang and scored the first Sun Devil touchdown of 2013.

Marcus Hardison got significant playing time, but didn’t do anything spectacular. However, it was good to get a game under his belt before Wisconsin comes to town. His size will be an important factor in the next four games.

Other notables like Chans Cox and Ellis Jefferson did not play.

Depth Chart (Who got the second team reps?)

“ASU returns several veterans on both sides of the ball, but the depth chart behind the starters is filled with a lot of talent that has not solidified themselves in the two-deep. Unlike most games against a lower-tier conference foe, every play throughout this one will be important in sorting out the depth chart.” – DieHard Storyline

By the time the second team reserves got in the game, The Devils had a commanding lead in the second half. This allowed the back up players to have some breathing room to get comfortable with their assignments and roles.

Some players stepped up and embraced their opportunity, while some struggled a bit.

On offense, two bright spots were Deantre Lewis and Michael Eubank. Lewis, finally 100% healthy, showed some of his old form, slashing through the field to make some big gains. He finished the night with 8 carries for 53 yards and 2 catches for 52 yards. It would have been nice to see him in the end zone, but solid night from #25.

Eubank took advantage of his opportunities in the second half and put together some solid drives, including a 4 yard TD run. Bank was 3-4 / 70 yards passing and ran 7 times for 18 yards.

Mike Bercovici never really got anything going with the second team offense and cornerback Lloyd Carrington struggled a bit on a few pass plays.

Installing the Defense for ASU’s match-up’s against 4 ranked teams starting the following Saturday (How did the defensive scheme look?)

“Facing four top-25 teams in successive weeks is daunting, but there is a silver lining. The Devils will face more traditional pro-style offenses in those games that will allow them to scheme very similarly against all four power running teams.” –DieHard Storyline

The first drive from Sacramento State was a bit alarming as the Hornets took the ball from their own 20 yard line, put together a seven minute drive with four 3rd down conversions. That drive resulted in a blocked field goal by Robert Nelson for ASU. After that, the Sun Devil defense locked in and shut down the Hornets for the rest of the night and got the shut out.

It’s worth noting that the defense was able to come together as a unit and get some game time reps in their “run stop” schemes. However, while some questions were answered against Sac State, until the Sun Devil face a quality running team like Wisconsin, we will have to wait and see if this team can handle the big boys up front.

As preparations have already begun this week, Sutton, Bradford and company will need to bring their “A” game against the Badgers. A healthy Chris Young is also an important ingredient to the mix, and he has been cleared to play. 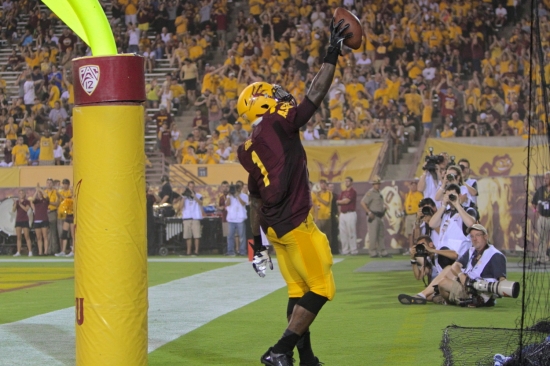