Tempe, AZ – Everyday I’m Devilin bellows “ONE SECTION AT A TIME.” That’s not only their motto, but also the mission that drives one of the best tailgate crews in Sun Devil Nation. 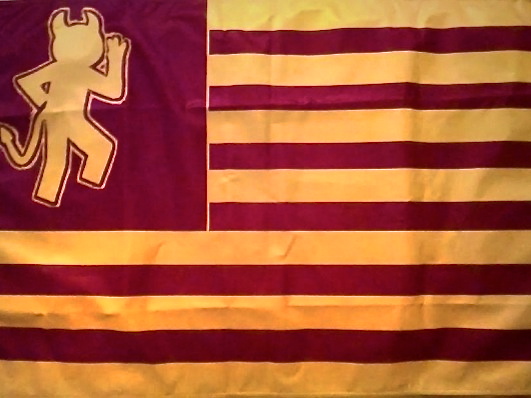 Everyday I’m Devilin’ is the proud name of this Tailgate Group of DieHard Sun Devil fans. But it’s more than just a tailgate party. It’ a movement of pumped-up visionary fans who are doing there part to strengthen Sun Devil Nation. They’re hard to miss before, during and after ASU football games. EVERY DAY I’M DEVILIN is a walking Sun Devil party prior to kickoff, they make the rounds outside the stadium with their portable cooler boom box with the volume cranked up and Foo Blanco, their good luck charm inflatable zebra (more on Foo below). Like pied pipers, they recruit more fans as they roam Lot 59 and enter the gates of Sun Devil Stadium. Once inside, you can find them in the south end zone stands getting crazy, waving their flag and doing their part to support the Sun Devils. Their energy is infectious enough to draw the eyes of the gameday cameras, highlighting them on the video board in the House of Heat for thousand of fans to enjoy during timeouts and commercial breaks. The Everyday I’m Devilin tailgate group was founded by three Sun Devil friends: Daniel Trujillo, Ivan Carreno and Abel Arriaga. We visited with Daniel Trujillo before the Colorado game last week to hear his story. 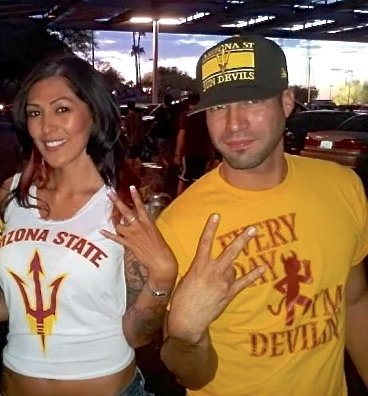 Sun Devil Daniel Trujillo throws up the Fork on Gameday…. and EVERY DAY

DHD: When and how did you become a DieHard Sun Devil fan which led to EVERY DAY I’M DEVILIN?

Dan Trujillo: “I always loved ASU, but everything really changed for me after the Nebraska game when we beat them 19-0. When all the fans stormed the field and we tore down the goal post, carried it out of the stadium and marched down Mill Avenue and then threw it off that bridge. That was a key moment in my life when I realized how beautiful and how important this whole Sun Devil thing is.”

DHD: What’s the story behind the zebra you take with you everywhere?

Dan Trujillo: “We have a party zebra named ‘Foo Blanco’ because it brings us good luck with the referees. Just look at what happened with the Wisconsin game this year, that was because of Foo Blanco, a key element of EVERY DAY I’M DEVILIN. He is also a chick magnet, everybody loves that zebra.” 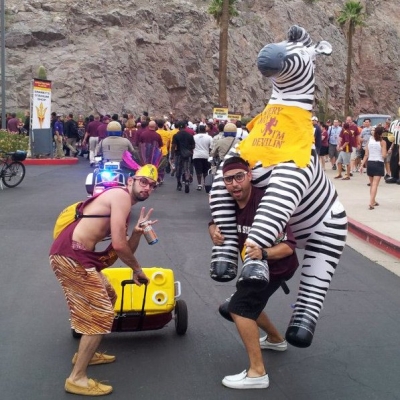 Outside Sun Devil Stadium with Foo Blanco on Gameday

DHD: Tell us more about your motto, “One Section at a Time.”

Dan Trujillo: “I want ASU to be ranked in the Top 10 every year. I want us to be big every year. How are we going to do that? By filling up the stadium one section at a time. If you fill up one section, then it will overflow into the next section which will get bigger and bigger. The next thing you know, the whole stadium will be filled up. What do recruits like? Not only cool uniforms, but also a packed stadium on game day.” “So what is my job as a fan? Come support, be loud, bring the zebra and have the best time on game day. One section at a time, we will do that. It’s not if it’s going to happen, it’s when it’s going to happen. One section at a time is what ASU football is going to be about.”

DHD: As a DieHard fan, what are you doing to make that happen? 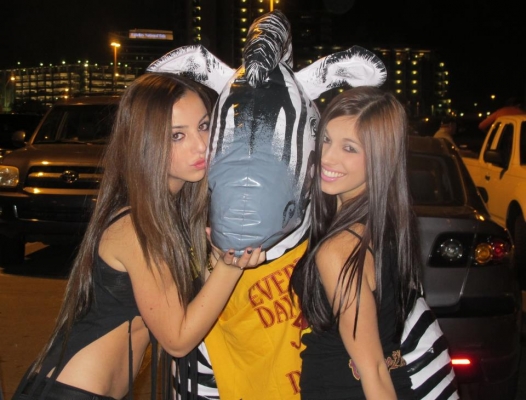 Dan Trujillo: “Keep doing what we’re doing. If the fans come out to our tailgate and see what we provide and how much fun we have, it’s just a matter of time before we’re going to blow up. We will get that National Championship some day.” “There are a lot of great things to do in the state of Arizona, but ASU home games only happen 6-7 times a year. If you come out to one game and see the fun we have and the love we have for ASU football, the product on the field is going to get better and better every year. If you just come to an event and you experience what it is to be a Sun Devil, you’re going to be addicted. You’re going to be looking at the game schedule every week and calling your friends. Once you experience it, you’re going to want more and more of it.”

DHD: What kind of impact do the fans have on game day?

Dan Trujillo: “It’s huge. One game day, the players will be motivated by the coach and staff, and their chance to get drafted into the NFL, but when you have the loud fans screaming your name and supporting you, it becomes what you really want as a player. That’s what we have to provide through ASU.” “Recruits have their options to go play at other schools. As a fan, we have to do our part, be ourselves, have fun, and players and fans have a great time. The bigger we get, it will become more addicting.” 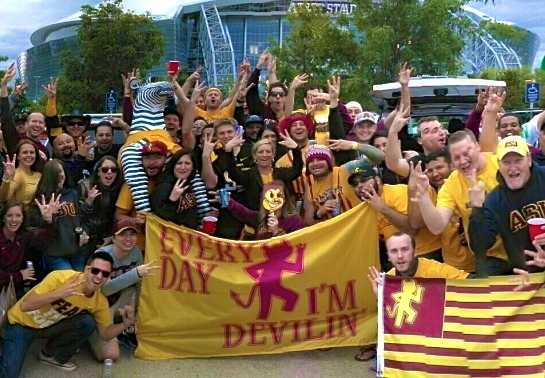 DHD: Why are you a DieHard Devil?

Dan Trujillo: “Everyday I’m Devilin. I bleed maroon and gold every day until I die.”