Eighty percent of all sensory information comes from sight.  Via the “Eye Test,” Bobby Hurley’s Sun Devil team can run with anyone in Basketball on any given night.  We know this team has incredible potential.  But DieHard Devil fans, basketball analysts and play by play announcers wonder what ASU team is going to show up at game time. 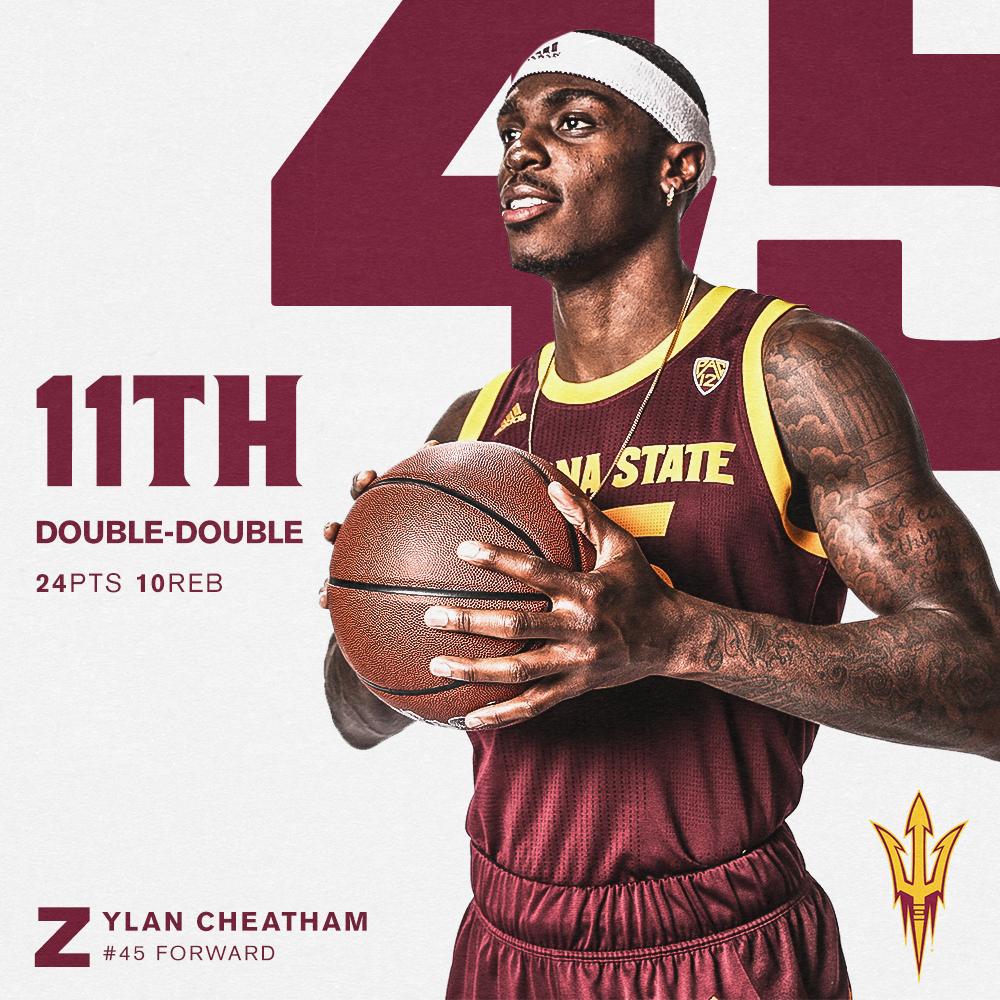 Transitions are not always easy.  Viewing them with an honest eye reveals new possibility helping any team or organization realize potential.  A person’s success in life can usually be measured by the number of uncomfortable conversations he or she is willing to have. Coach Hurley’s Sun Devils had to turn the corner and do so fast Saturday night!

Bobby Hurley and this Arizona State Sun Devil Men’s Basketball team have struggled with change. Change is the foray into the unknown, but without it, true potential may not be realized.

There is an innate part in every one of us prefers predictability. The familiar feels safe, but the very definition of insanity is doing the same things over and over whilst expecting different if not superior results.  All too often the “old way” will straitjacket ultimate success. Hurley’s Sun Devils must turn this corner to become more consistent and do so fast with six Conference games remaining.

To that point, it was refreshing not to see Luguentz Dort taking on triple teams against Utah.  We didn’t see Remy taking one-legged lateral jump shots.  The “old way” against a zone?  Think of last years Guard U jacking up 29’ 3-pointers dribbling around the arc in a frenzy until the shot clock wound down.

Bobby Hurley strategically inserted Freshman Guard 6’7” Elias Valtonen and Sophomore Forward 6’9” Vitaliy Shibel for 13 total minutes.  This provided needed spells for his regular Sun Devil rotation in absence of veteran Mickey Mitchell most of the season.  De’Quon Lake was benched by the way, and ASU could have used his length and athleticism!  I wonder what is going on there?  Anyone?

Bobby Hurley and his Sun Devils have far too much talent than their 17-8 record reflects.

In a must-win scenario last night, what we didn’t see was encouraging. There was little-wasted movement on offense or defense!  ASU’s approach and tenacity must continue down the stretch in Pac-12 play. Sun Devil Basketball has been stuck in a loop, winning games against stiff competition and losing games to inferior opponents by defaulting to bad habits and inefficient movement.

Something had to change in Salt Lake City Saturday night and did!  With all sights set on the summit of college basketball, the NCAA Tournament, Arizona State University Men’s Basketball got back into the hunt with an offensive outburst against Utah. We saw Hurley make another Quad 1 level coach absolutely mad with frustration as he did to Mike Hopkins of Washington last week in ASU’s upset of the then-undefeated Huskies.

Utah Guards Parker Van Dyke and Sedrick Barefield scored a team-high 17 points each, but it was far from enough to match the effort of Arizona State who snapped the Utes three-game winning streak.  Van Dyke opened the first half on 5-7 shooting, scoring 15 first half-points.

Utah shot 56.7 percent from the field overall in the first half, but Luguentz Dort and Rob Edwards guided the Sun Devils through the first 20 minutes, each with 15 points.  A well-coached Utah team was able to erase a 13-point deficit early, trailing by just 5 points at the break, 47-42 Sun Devils.

The first six points of the second half came from the free throw line with Zylan Cheatham going 4-4 and Utah’s Sedrick Barefield sinking 2 in a row, 51-44 Sun Devils at the 18:51 mark.  Free throws were a big part of the story last night!  Next, Rob Edwards attacked the rim scoring 2. Edwards’ energy set the Sun Devil tone for the second half.

Tell me if you are seeing a pattern from the Devils… 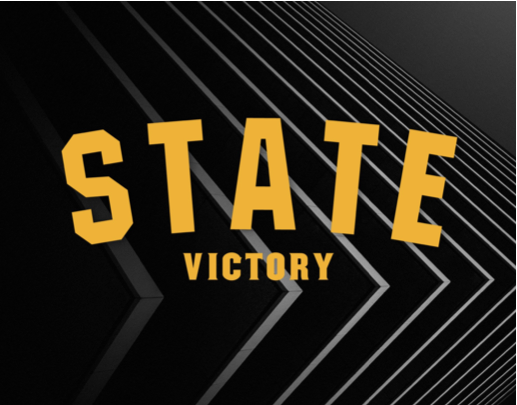 What changed in Utah?

It was the most physically complete effort I have seen from Hurley’s talented squad.

ASU attacked the rim all night finishing 20-24 from the free-throw line.  Taking the ball to the hoop consistently opened up great looks outside and some interior passes for layups and dunks.  The Sun Devils missed quite a few layups as well, but Arizona State shot .54 percent from the field and was 10-22 from 3-point range. Both teams combined to shoot 60 free throws with Utah finishing 23-36 from the line.

7’ Utah Center, Jayce Johnson, had 3 interior rejections early, but the Sun Devil offense never stopped going inside as it has in the past. The holes in the middle of the Utah Zone Defense were glaring, and it was nice to see ASU efficiently passing and using the dribble to expose it.

Utah Coach Larry Krystkowiak is a disciplined teacher, and his Runnin’ Utes got back into the game late with Freshman Both Gach’s three-pointer at the 3:06 mark, 87-80 Sun Devils. Gach, the 6’7” Utah Forward was a perfect 3-3 from the floor in 17 minutes of play. 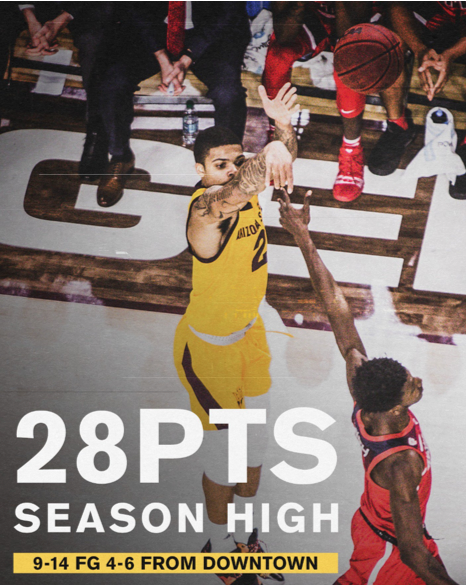 Krystkowiak used 10 players for meaningful minutes supplying fresh legs to combat ASU’s aggressive rim attack. But the Sun Devils were relentless in this regard. Edwards went 2-2 from the free throw line followed by Remy making two layups and a free throw.

Zylan Cheatham made an athletic layup, and Edwards again was fouled at the rim, sinking 2-2 from the line to finish the night’s scoring.

The Sun Devils out-rebounded the Utes 35-29 and outscored Utah 18-8 in second-chance points.

Rob Edwards would go on to finish the game with a season-high 28 points, and Zylan Cheatham registered a double-double with 24 points and 10 boards. Luguentz Dort looked composed throughout this battle and finished with 17.

The will of Remy Martin can’t be overlooked. His passion and energy were contagious, and he provided his own share of clutch plays in ASU’s 17th Win of the season!

ASU’s willingness to respond and adapt throughout each contest is key in advancing the winning “culture” Sun Devil Basketball fans crave. Bobby’s team has responded to two unnecessary losses with two big Quad One wins the Tournament Selection Committee will recognize. Consider where ASU would be right now if we were more adept at making adjustments against inferior opponents, Washington State and Colorado.

Next season Sun Devil fans can look forward to a new infusion of talent due to Hurley’s consistent tenacity on the recruiting trail. But today, right now, the ball is quite literally in the hands of a young, talented, and capable Sun Devil team.

Arizona State hosts Stanford Wednesday and California on Saturday at The Bank in Tempe.  These are the last two home games for Bobby Hurley’s Devils who happened to struggle with both teams on the road.  Barring a Pac-12 Conference Tournament Championship, if ASU loses one of the two here, as has been the pattern, the Sun Devils will be an NIT team.

Oregon, Oregon State, and Arizona close out Pac-12 Conference play, all on the road.