Let me start by saying, I am an Arizona Native, born and raised a Sun Devil since 1958. Just recently have I been able to support my Sun Devils by purchasing season tickets to the Football program. I also enjoy the other sports, but I have a special place in my heart for the Football program.

I can remember when I was around 6 years old and at Thanksgiving time, the Arizona Republic and Gazette would have the big story on the front page about the Territorial Cup Game, Frank Kush (my hero still) and I really enjoyed the colored cartoon figure of Sparky jabbing Wilbur (that other team’s mascot) with his pitchfork. Now that was a sight to see. My Dad and I would hang out by the radio to hear all of the games, because we really could not afford to go to the home games. We had a large family of seven, and it would not be fair if just my Dad & I would go. Sparky was, and still is my most favorite mascot of all  time.

I do not mean for this to sound like a threat of pulling my support, but I also hope this will not fall on deaf ears either. This Arizona State University has been doing some really great things for the past couple of years. I realize they do not have to consent with the community or student body if they want to change something, wether it be their Logos or Mascots. But it would have made more sense to me and a lot of other people than this sinister looking character is not necessarily kid friendly.

Just last year at the Kraft Fight Hunger Bowl in San Francisco, Ca., I was so happy to finally get a great picture with my Girlfriend Nancy and Sparky at the Pep Rally. It was so awesome. Last year was the “Fork” logo. There were many fan’s against that change, but they learned to support the idea because they were told that Sparky was going no where, and the “Fork” was just a slight change in the Iconic history of the ASU athletics logo. I myself really liked the “Fork” idea, but I will not support any change to my friend, “Sparky” the ASU Sun Devil Mascot, and if you ask my hero, Frank Kush his opinion, I think you know what his answer would be. I did not go to school at ASU, but I am more of a Sun Devil than anyone that wants to change my buddy, SPARKY.

*  *  *
Every Sun Devil Matters, and a unified voice of fans speaks loudly. Take part in THE SPARKY PROJECT & spread the word. Take me there Now 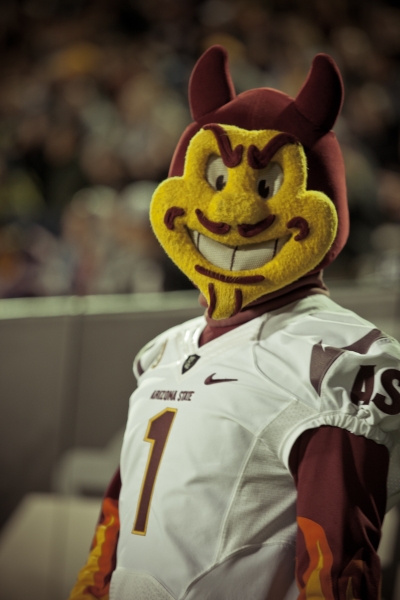