The Arizona State Sun Devils were only 29-percent from beyond the arc but the real story Wednesday Night was free-throw shooting.  The Sun Devils were 73-percent from the line on 51-attempts.  The seats at The Bank started emptying long-before the game was decided. The erratic play and hackfest was extremely unpleasant to the eye, unless of course, you are a DieHard Devil.  ASU defeated the Prairie View Panthers (Houston, Texas) 88-79.

Remy “Share the Sugar” Martin certainly wasn’t dishing out the candy.  In fact, none of the Sun Devils were passing the ball efficiently. ASU had around 90-possessions if not more, and managed only 9-assists.  Remy had 3, Verge and House had two each. The Big Fundamental Romello White and Kimani Lawrence each had one dish. That’s all she wrote for ball-movement. 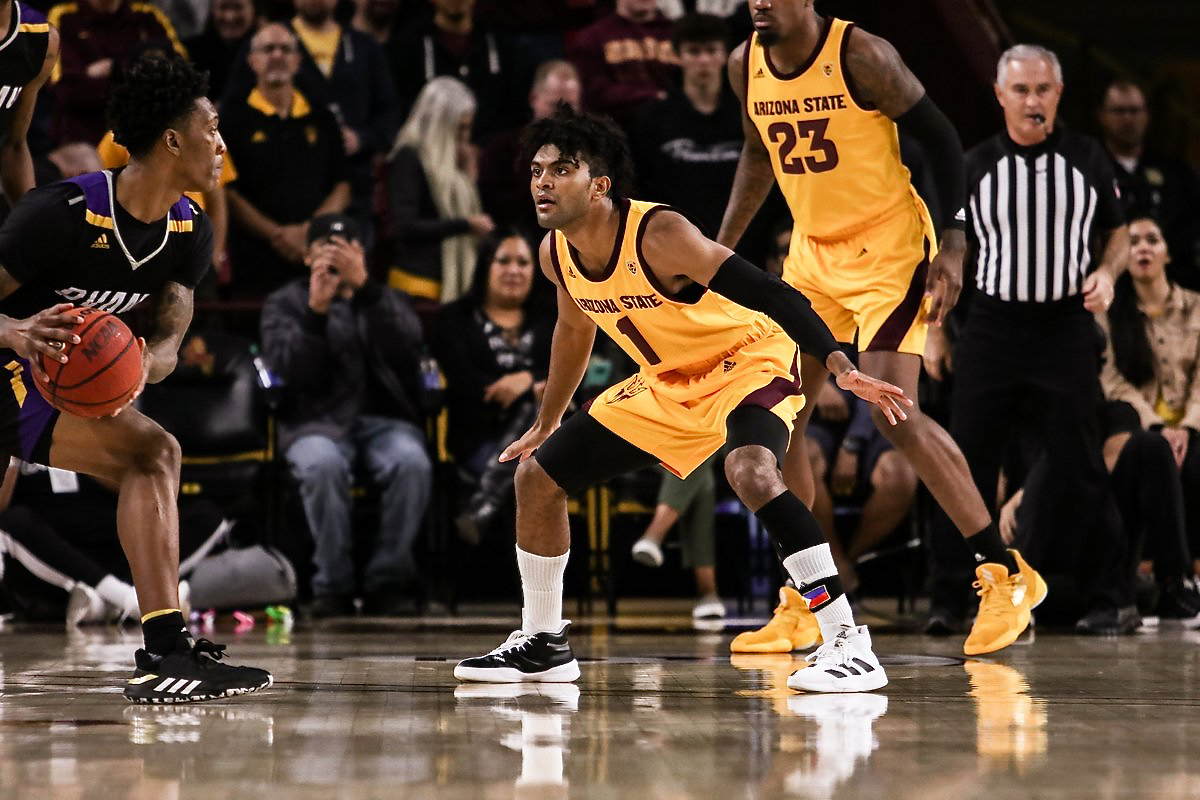 With that being said, Martin finished with a team-high 21-points, shooting 55-percent from the field.  While Martin made both his 3-point attempts, the rest of the team was hopeless. The Sun Devils are now shooting 31.3% from 3-point range and might-as-well invite Luguentz Dort back to chuck-rocks (54-176 – 30.7% in 2018-2019) because he would fit-right-in.

The Culprits Wednesday night were Rob Edwards, Taeshon Cherry, Alonzo Verge, Jaelen House, and Elias Valtonen who combined to go 3-15 from distance. Guard-U is fast becoming Brick-U, and it was another ugly offensive performance by Arizona State despite the 88-point total.

After the Louisiana tilt, Bobby Hurley stated he was concerned about not feeling right after Sun Devil victories.  Last Saturday morning just 8 hours after ASU defeated the Ragin’ Cajuns, Coach Hurley hosted a mandatory 6am practice to make a point.

As a result, the Sun Devils were more aggressive but continued to lack focus for the entirety of the game. It is clear Coach Bobby Hurley’s 2020 Sun Devils are going to have to be a tenacious defensive bunch. ASU needs to score in transition, otherwise, it’s going to be a half-court crap-shoot when the Devils begin Pac-12 play.

In review, one would be hard-pressed to see the Sun Devil offense execute more than two passes to set up a shot attempt against Prairie View.  On 88-points, the Sun Devils only had 9-assists and again were missing wide-open looks at the rim as well as from distance.

Moreover, quite a few of the fouls against the Panthers were ticky-tacky, the kind of calls the Devils may not get in future games. Last night’s refereeing nearly made Don MacLean of the PAC-12 Network lose his mind while attempting to call-the-game.

.@robedwardss2 not wasting any time.

Back-to-back buckets from Rob has us up 12 to open the half.

Be it “push-shots” by Verge and House or an uncharacteristic “throw-shot” by Rob Edwards or Taeshon Cherry looking lost outside of 23-feet, basketball in Tempe is showing some unwanted Jekyll & Hyde tendencies.  At any rate, the Sun Devils are about to run a gauntlet with a January 4th tilt that starts a brutal Pac-12 Conference Season. In the meantime, Georgia is coming to town looking for revenge.

Back to the game.  On Wednesday Night, with 5:17 remaining in the first half, Prairie View A&M had taken a 27-26 lead in a game where they should have been down by 19.

Romello White was triple-teamed by PVAM and found himself at the free-throw line often (10-14, .714%). Too often, ASU’s guards defaulted to dribbling around and looking to show some one-on-one prowess instead of getting the ball inside.

Arizona State turned the ball over 13-times in this one.  The offensive effort for the Sun Devils lacked focus and discipline.  Case in point, Romello White was only 2-2 from the field with one assist.  Even with the free-throws, he barely had ten shot opportunities from the floor.

Jalen Graham is now 17-25 (68%) with 22-rebounds, 13-rejections, and 6-assists this season.  In a game where the Sun Devils needed interior scoring and at times a second defensive presence in the paint, Graham only played 6-minutes. Romello White and Jalen Graham’s ability to move the ball outside to spot-up shooters was and will continue to be critical for the rest of the season.

Wednesday night Alonzo Verge Jr. went to work against the Panthers of Prairie View. Except for a few excitable passes, Verge was focused on attacking the hoop, finishing 5-9 inside the arc while shooting 7-8 from the charity stripe.

Verge made his first 3-point attempt of the season (1-16) and ended with 4-rebounds, 2-assists and 20-points. “It was a big relief, a big weight off my shoulders,” said the junior transfer. After all, he averaged 30.9 points a game at Moberly (Mo.) Area Community College last season.  For the Sun Devils Verge is 6-percent from 3-point range and collectively 29.7-percent from the field.

The floor spacing for Arizona State was off. The offensive structure was minimal, and the game got sloppy fast. 31 Fouls were called in the first half. Prairie View suffered 20-turnovers and Arizona State had 13. 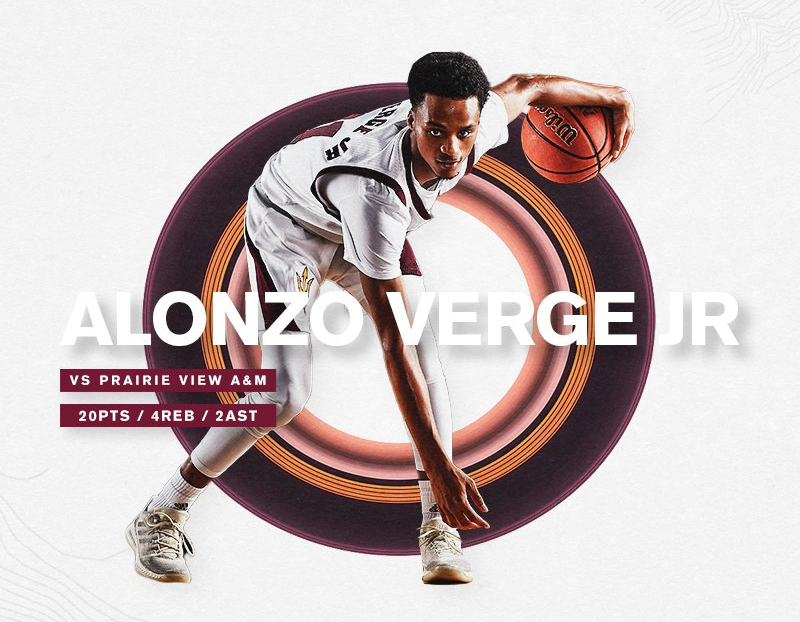 The offensive star of the game was 6’ Senior Guard Darius Williams of Prairie View who poured in 26-points in 25-minutes. Overall Williams was 5-8 from beyond the arc, and he grabbed 6-boards.

The Panthers (3-6) were whistled for 32 personal fouls in the game. Despite that many ASU free-throws, the Devils could not shake Prairie View for much of the game. This despite an 18-3 run fueled by nine points from Alonzo Verge Jr. which made the game 72-54 with nine minutes remaining. The Panthers outscored the Sun Devils down-the-stretch 25-16 (88-79).

The referees at times seemed to be anticipating contact and blowing early or unnecessary whistles. The game took over two and a half hours with the half-time break included. 84 Free-throw attempts in a single game is indeed rare and a sign of sloppy play by one or both squads.

After a flop, Prairie View Coach Byron Smith was called for a technical.  Smith then proceeded to antagonize (in a playful way) the Sun Devil faithful in the student section. Any coach would have a rough night watching an opponent take 51 free throws.

“I want to keep my job. I don’t want to get fined,” Prairie View coach Byron Smith said of the free throw disparity.

He went on to say:  “Ray Charles is dead and blind and could have seen it. There was definitely a disparity in the calls. I think the refs are fair guys. I think they called it like they saw it.” 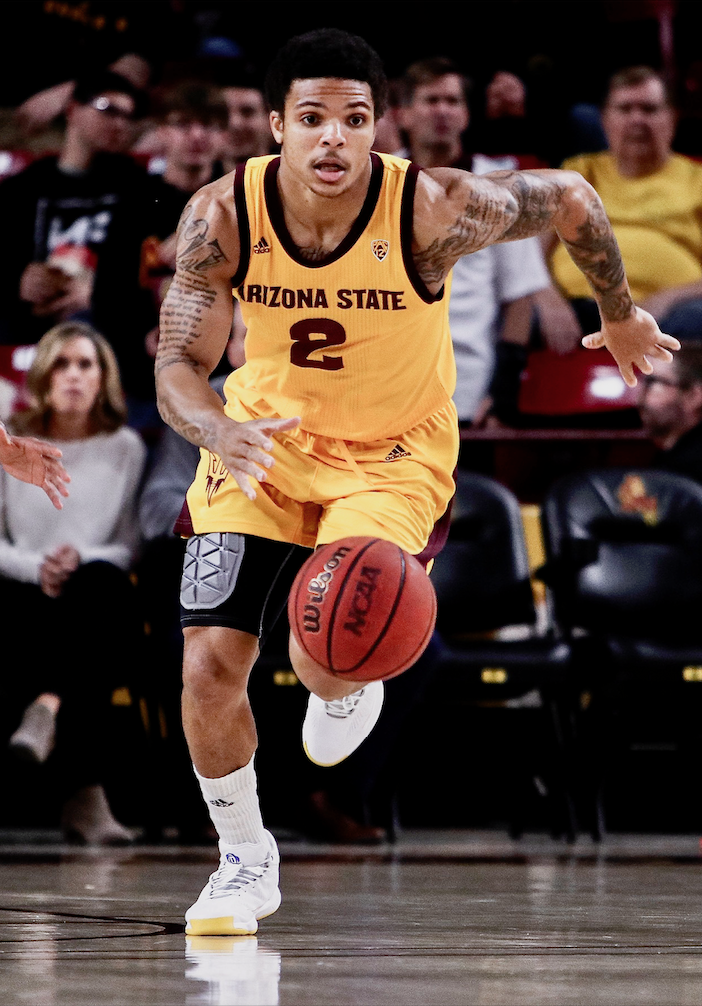 The Georgia Bulldogs visit Desert Financial Arena on Saturday at 6:00 pm MST. The game will air on the Pac-12 Networks.

Remy Martin scored 21 points, and Romello White added 16 as No. 20 Arizona State rallied from an 18-point deficit to beat Georgia on the road. Martin gave the Sun Devils their first lead with a baseline jumper that made it 71-70 with 2:43 remaining in the game. Zylan Cheatham added 10-rebounds to the box score, but Arizona State was not defending the rim well and ended with only 8-assists on offense.

This year, Georgia features 6’5” 225-pound Freshman Guard Anthony Edwards. He will be a tough man-to-man challenge for the Sun Devils. Edwards is the type of tall and strong guard that tends to give Arizona State fits. Bobby Hurley will need to find a way to contain Edwards down low while running an offense that creates more good looks for shooters than the Prairie View game.

South Phoenix is where my heart is. Blessed to be able to partner with @getEthosLife and make a donation to South Mountain high school where I grew up and give back to the community that made me. 🙏🏾❤️ #EthosForGood pic.twitter.com/60TWOEzyH3

Tickets to this season’s Pac-12 matchups are on sale now!

Be sure to stock up before 2020 rolls around.

The Chef is perfect from beyond the arc so far.

Once A Sacramento Kings Savior, ASU Coach Bobby Hurley Has Laid His ‘Demons’ To Rest https://t.co/YKdHlGNF3n