(Freeman) already grades among the best players in ASU history

The great ones are different. They’re wired differently, in a way that allows them to achieve greatness, despite unremitting hitches.

The great ones don’t give up when they dislocate a hip at the age of 11 and are encouraged to play through pain for nearly a year before a diagnosis requiring a three-inch screw to be inserted into their femur.

The great ones don’t give up when they partially tear their ACL three years later trying to avoid a teammate during base-running drills.

The great ones don’t make it to the biggest and brightest stage only to fall heartbreakingly short. They show what they’re made of and demand the world remember their name. 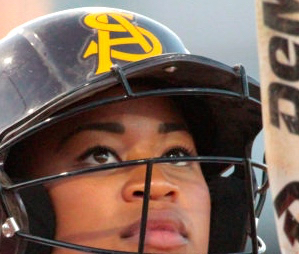 Entering her senior season, Freeman owns a stellar trophy case and already grades among the best players in ASU history. The catcher ranks fifth in ASU history with 41 career home runs, ninth all-time in RBI with 146 and her 2014 batting average of .424 is the 14th-best in ASU single-season history.

Freeman also takes tremendous pride in her defensive game, garnering a .997 fielding percentage and throwing out 30 percent of runners in the 2014 season, while also leading a pitching staff to a 2.14 earned run average. Splitting time with junior Katee Aguirre.

Freeman’s journey from Lakewood, Calif. to ASU, stardom and perennial top NCAA catcher has been a tireless and jarring one, beginning early in her softball career.

“I remember playing for my dad when I was eight or nine years old and I wasn’t very good,” Freeman said. “Everyone thought that this other girl was my dad’s daughter and I just remember that that made me really mad. I wanted them to know I was his daughter and I could play too.”

Freeman didn’t start out as a catcher, she began pitching at a young age and fell in love with being in charge of the game.

“I thought I was pretty good,” Freeman said. “But, it didn’t last very long.”

Soon after picking up pitching, Freeman was running down the first base line after singling. However, when Freeman hit the bag with her left foot, she nearly fell to the ground.

“I had no idea what had just happened. I just knew that something wasn’t right. But my parents wanted me to keep going. I complained of my quad hurting and everyone we saw focused on that. It took an entire year for someone to diagnose it as a hip dislocation,” Freeman said.

For most adults with hip dislocations, the pain is felt in the hip joint; however for juveniles, the pain can materialize in the quadriceps area. After diagnosis, Freeman needed a three-inch screw inserted into her femur and a year’s worth of rehabilitation.

At that point, Freeman switched to catcher and attacked the positional transition, working with Team USA Gold medalist and UCLA alum Tairia Flowers. For Freeman, it didn’t matter what position she played, she just knew she wanted to be great at what she did.

“Her dad [Mike] used to be a catcher, so they started working with each other too,” Freeman’s mother, Luanne said. “To read the opposing batter, to work with a pitcher, all of that. They worked endlessly on it so that Amber could still be in control of the game just from another position.” 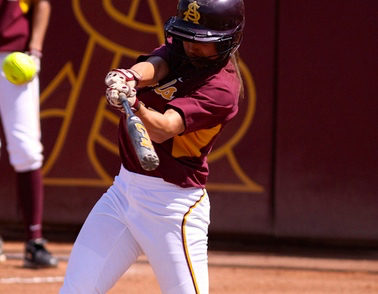 But great might’ve been an understatement. She rapidly became a blue-chip prospect for top softball programs like ASU as an eighth grader about to enter Mater Dei High School.

“That’s really when I started recruiting Amber,” ASU assistant coach Robert Wagner said. “She was this pure-hitter at a premium position and we saw her as someone we wanted to pass the torch off to down the road.”

For Freeman and her family, though, there was no other school than Pac-12 rival UCLA.

“I was a bat girl for a long time, I had a great relationship with Coach I [Kelly Inouye-Perez] and I had all the gear,” Freeman said. “In my eyes, I wanted to be a Bruin and I told everyone that.”

Around that time in 2007, Freeman received an invitation to ASU’s annual holiday camp and insisted she at least go and see how she compared to others her age at a top camp.

“She stepped onto that field at Farrington before camp started and turned to Mike and I and said, ‘this is where I belong. I want to be here,’ and we were both in shock,” Luanne said.

For Amber to go to school in another state was not something Luanne ever even considered: “There wasn’t going to be a recruiting process for us. We were going to meet with the coach [at UCLA] and Amber would be offered a scholarship and that would be the end of the story. But she went on an unofficial visit and came back feeling unhappy about it.”

Freeman was a hot commodity for schools all around the country

All Freeman remembers about that camp is being called into meet with then-head coach Clint Myers and Wagner.

“That’s when I knew I wanted to be there,” Freeman said. ASU was in the early beginnings of a sensational catching era, beginning with Kristen Miller. “I knew that if I went there I’d be in great hands.”

Freeman kept her options open however, waiting to commit to a school. By the time her sophomore season rolled around, Freeman was a hot commodity for schools all around the country.

When Freeman’s high school career began, the very first day of practice was base running. Freeman remembers rounding home and noticing the catcher not moving away from home plate to let her pass.

At the very last moment, Freeman tried to step to the right to side step her teammate. Freeman, however, was wearing brand new metal spikes and when her leg moved, her foot didn’t.

Doctors told Freeman she had partially torn her ACL, but her parents encouraged her to play through her pain. She wanted to play too, using pain medication, a knee sleeve and brace to stabilize her knee and keep her on the field.

In the season opener, Freeman went to throw down to second base in the first inning. When she stood she felt a pop in that same knee and she collapsed to the ground.

“The worst pain I’ve ever felt in my life,” Freeman remembers. “I can’t even fathom something hurting more than that did. I knew I had blown my knee out completely.”

The diagnosis? A fully torn anterior cruciate ligament and a torn meniscus. Freeman’s sophomore season was over.