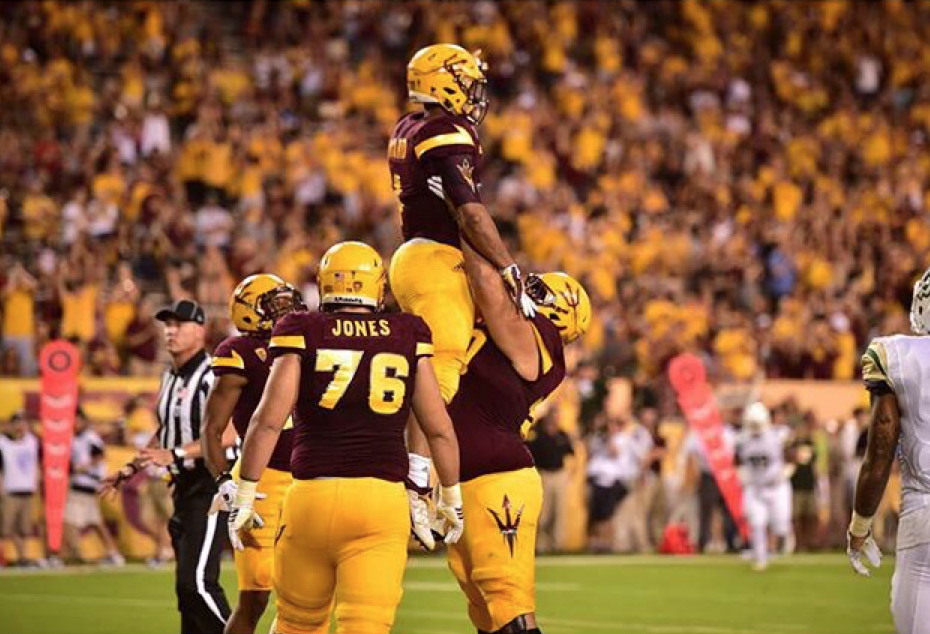 Week 2 finally brought football to Sun Devil Stadium for the first time in 2015. The tradition of wearing the classic Gold Helmet/Maroon Jersey/Gold Pant during the home opener continued, and it looked great. It was the first of the standard Adidas uniforms to hit the field following Week 1’s Desert Ice alternate in Houston.

There was no better way to introduce the new maroon and gold digs than under the lights, and did they ever deliver. I personally have seats in the lower rows of the upper deck, and even from there I was able to clearly read “Arizona State” across the chest, something not visible with Nike’s uniforms.

For the first time in years, the gold helmets and pants matched. No longer was there an issue of a mismatched gold pant and yellow helmet or vice versa like we’ve seen in years past. The matching helmets and pants framed the bold maroon jerseys very nicely, and the two finest colors in all of college sports were done due justice. 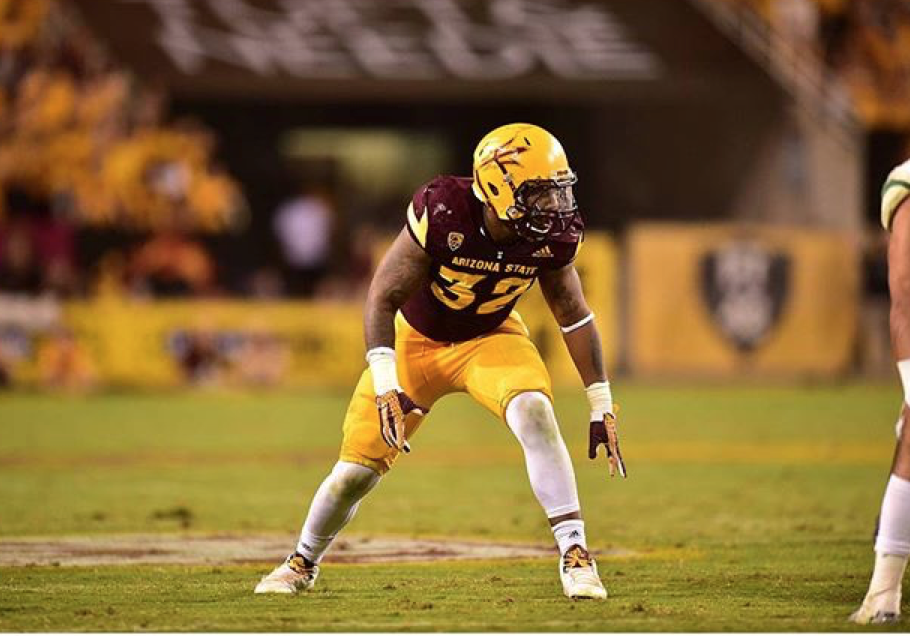 The updated glossy stripes and lettering on the jerseys made them very visible and were a treat for the eye in person. The glossy pitchforks on the pants brought terrific brand recognition, but were not at all overstated. Overall, the maroon and gold proved itself to be the timeless favorite it has come to be known as over the years. After a rough outing against Cal Poly and their triple option, the Sun Devils prepare for a match-up with New Mexico and their second straight triple option opponent in Week 3.

This week is the Whiteout. Fans are being asked to wear white, and the team is wearing white from helmet to cleat – affectionately called the “Storm Trooper” look by many ASU fans.

Aside from being the designated away team, this is the first time the Sun Devils have donned white on their home turf. It is yet another color scheme gimmick to be added to the already existing Blackout and Maroon Monsoon.

To say Sun Devil Nation has been vocal about this Whiteout theme is an understatement. Since the release of the color schedule by Sun Devil Athletics, the reaction to the Whiteout in particular has been overwhelmingly negative. Some aren’t necessarily for it, but approach the idea with a “Let’s give it a shot” attitude. Those in favor have largely stuck to the “It’s progress. Evolve, get over it, and quit complaining” talking point. To those requesting we evolve, simply accept it, and just go along for the sake of going along… I would like to rebut.

I am unabashedly against this Whiteout promotion. However, I am far from being resistant to change, or ‘evolution.’ If you have any question about that, check out my enthusiasm about Desert Ice in the first two posts of the UNIFORMITY series (Uniformity installments 1 & 2). This is not evolving; this is wearing an away color combo we’ve already worn, but instead wearing it at home. It also lacks originality. White is for away games.

That doesn’t sit well with me and it shouldn’t sit well with Sun Devil nation. We as fans are stripped of seeing our colors in one of the few precious times we get to watch our beloved team at Sun Devil Stadium this year. Home fans deserve to see their colors on gamedays at home.

I’ve also heard the argument that Whiteouts have worked well for the likes of Penn State. Good for Penn State. We aren’t Penn State. I don’t want to be like Penn State who, along with blue, has white as one of their primary colors. I want to be like Arizona State where maroon, gold, and black reign supreme. Other criticisms have cited that we lack originality and seem to be simply copying the idea from other schools that have white as one of their colors. Not to beat a dead horse, but like every other college team, white is our away color, not one of our primary colors.

Other whispers indicate folks think a Whiteout works for hockey, but don’t like it for Sun Devil Stadium. A lot of long-time season ticket holders are upset, feeling they have no say in these marketing decisions for yet another game where they are encouraged against wearing their beloved gold.

Cont. for What Will Happen This Week, Future Whiteouts and this Friday