The Maroon Monsoon game against USC last Saturday had the team displaying their all maroon uniform combination, and they looked great. That’s all we’re here to talk about. The team was aesthetically pleasing on the field and that’s the only thing I want to remember from that game. It was the first time we have seen the Maroon pant this season with its black pitchfork outlined in gold on the left thigh. When the uniforms were first released, I was leery of this detail and how it would translate on the field. Any concerns were quickly squelched on Saturday. The pants looked incredible and accentuated the matching jersey and helmet.

The Sun Devils once again went with the oversized-pitchfork asymmetrical helmets which, while one of my favorite choices, has now been done 3 of the 4 games thus far in 2015. The standard forks are outstanding too, and my preference is simply a balance in usage between the large and standard sized decals. That’s probably the only complaint (if you can call it a complaint) that I had with these uniforms. It was another Maroon and Gold feast for the eyes.

The Reveal of a New Alternate As was teased in last week’s UNIFORMITY, there is now a new alternate uniform to add to ASU Football’s impressive, ever growing portfolio. Desert Hammer, as it is called, was released in creative fashion with a teaser image released online by Sun Devil Athletics social media, and 3 other images released throughout the night on 3 separate local news outlets. 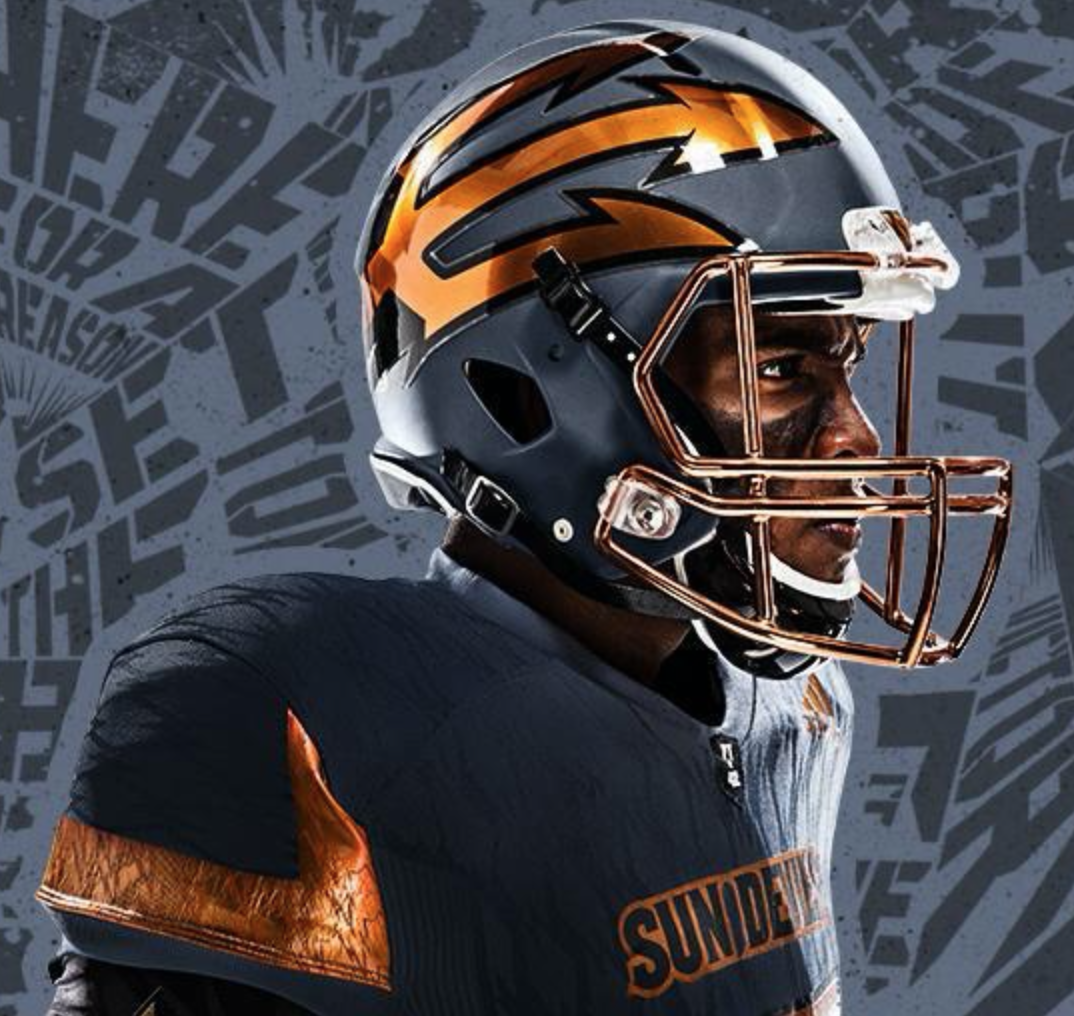 It is a spinoff of 2014’s wildly popular Desert Fuel, an all gray look from head to toe. Many of the elements are similar to the Desert Ice alternate which I described in depth in the first installment of UNIFORMITY. Like Desert Ice, the helmet features an identical oversized copper pitchfork and number decals as well as a copper chrome facemask, with the difference being a matte gray shell. 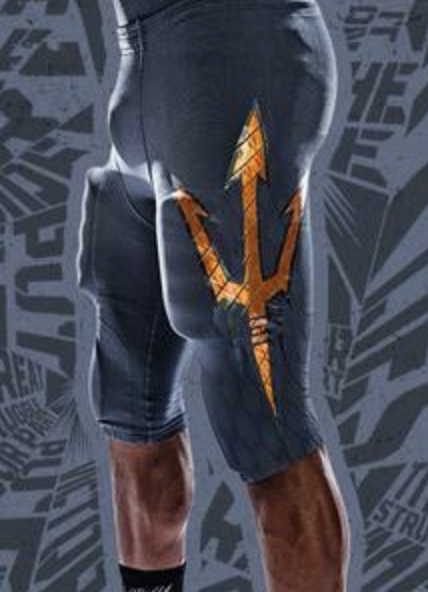 The matching gray jersey has “Sun Devils” written across the chest in onyx, outlined in copper as opposed to Desert Ice’s jersey which has “Arizona State” across the chest. The numbers and shoulder stripes are the same copper as seen on Desert Ice, featuring the same pitchfork pattern as well. Just as the Desert Ice jerseys had “Sun Devils” stitched vertically along the rib cage, so too will Desert Hammer’s jersey, only it will be a darker shade of gray than the actual jersey itself.

The gray pants feature the same oversized pitchfork design on the left thigh as seen on Desert Ice. My favorite element is the glove combo which is a copper take on the Arizona state flag when the palms are placed next to each other.

This is where it gets interesting. The reveal came ahead of the Sun Devils traveling to Pasadena to play UCLA at the Rose Bowl.

The Desert Hammer jerseys are too dark to wear on the road leaving many who saw the reveal on Sunday night wondering how the team would be able to wear Desert Hammer next week.The Sun Devil Equipment staff quickly satisfied fans’ curiosities on Monday revealing that Desert Ice and Desert Hammer elements will be interchangeable.

For the game against UCLA, the Devils will be wearing a Gray Hammer Helmet/White Ice Jersey/Gray Hammer Pant combination as shown below.

Because of Nike’s exit from the program, the Desert Fuel alternate used in 2014 will likely never be seen again which is unfortunate because among the three gray and copper based alternates, the original remains my favorite. However, I am enthralled with the addition of the gray to ASU’s helmet collection. I really love the gray from head to toe and can’t wait to see the Desert Hammer jersey on field, though that will not be happening this week.

I initially had mixed feelings about the gray/white/gray combo. The combinations posted by the equipment didn’t agree with my eye at first sight, but I think a lot of that could have to do with poor lighting in the photos. I look forward to seeing how the combo looks in action on TV. Hopefully it is a winning combination both aesthetically and in the final score against the rival Bruins.

Beginning this week, I will include an imaginative uniform combination created on The Devils Wear website. If you have any suggestions for future combinations, let me know on Twitter.