Life is ten percent what happens to you, and ninety percent how you respond.  We can make every excuse in the book, could have, should have, would have… but this Sun Devil Football team has all of the talent in the world to compete.  The Sun Devils must immediately put this Colorado loss behind them. Football truly is a game of inches and Arizona State fell short. The Sun Devils (3-1, 0-1 Pac-12) won their first three games behind a powerful defense, allowing 21 combined points. ASU was the second-best unit in the nation behind Wisconsin who proceeded to embarrass Michigan Saturday morning.  Colorado (3-1, 1-0) had 24 points by halftime and tallied 477 total yards against the Sun Devils, despite playing most of the game without star receiver Laviska Shenault due to injury.

Steven Montez lit-up the ASU secondary methodically for 337 yards with three touchdown passes to Tony Brown.  Colorado upset a ranked road opponent for the first time in 17 years with a 34-31 win over our then 24th ranked Sun Devils.

Jayden Daniels threw for 345 yards and two touchdowns, connecting with star receiver Brandon Aiyuk nine times for 122 yards.  Aiyuk also had 2 kick returns for 56 yards with a long of thirty-two, a standout effort keeping the game close.  Eno Benjamin had 20 carries for 83 yards and two touchdowns, but only 2 receptions for a total of 0 yards, simply not enough touches for the explosive runner.

Congrats to @eno_benjamin5 on eclipsing 2000 career rushing yards this past weekend 🔋 pic.twitter.com/lCPe2zs30A

Here at DieHard Devil, we suggested Rob Likens and Herm Edwards needed to place the ball in their young quarterback’s hands. On 39 attempts, Daniels connected twenty-four times displaying poise and confidence.  He missed some receivers and had some drops, but Daniels is the real deal.

In the end, nine Sun Devils had receptions. Win or lose, opposing coaches are now going to have to plan for aN ASU squad that can exploit every angle. Eight receivers had catches of 11 yards or more including Aiyuk’s big 53-yard reception.  Jayden Daniels is only going to get better.

The Sun Devil Defense had zero sacks, zero interceptions, and only 3 tackles for a loss allowing CU Quarterback Steven Montez to connect on 23-30 pass attempts essentially untouched.  Colorado ran 40 times for 138 yards keeping the ball away from the ASU offense with a workmanlike 3.5 yards per rush. 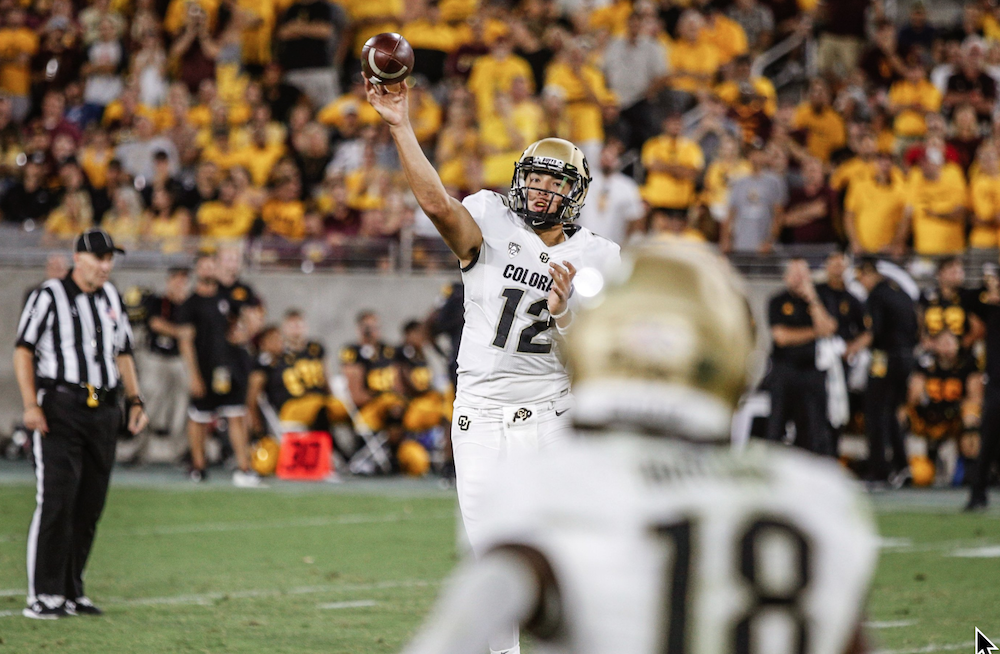 My friends, zero sacks by the former 24th ranked team in the Country tells the entire story in the 34-31 loss to the Colorado Buffaloes at home in Tempe.  This game was a tale of two very similar teams and all of the numbers match-up. One team finished strong. One team did not.

Marvin Lewis once said of his Cincinnati Bengals “They’ll keep playing. We didn’t play well at the beginning of the game and were playing uphill. But we kept playing and hanging in there together.”  This perfectly surmises the 14 point deficit the Sun Devils fought back from early in the game Saturday Night.  ASU was blanked in the first quarter and responded with 21 points in the second, but they allowed the Buffaloes to rack another 10 to end the half. CU 24 ASU 21.

CU Quarterback Steven Montez put the Buffaloes up 31-24 in the third quarter with a 20-yard TD pass to Brown. Daniels answered with a 39-yard TD pass to Frank Darby tying the game for the fourth time.  James Stefanou gave Colorado the lead back with a 44-yard field goal with 2:03 remaining before Colorado forced the Sun Devils to turn the ball over on downs.

Congratulations to @THE2ERA who has been added to the 2019 Biletnikoff Award Watch List! https://t.co/LCq2lJE0mG

Arizona State appeared as if it would get one final chance, but was called for roughing the holder while trying to block another Stefanou kick.  I guess instead of getting into the Colorado backfield when Steven Montez was throwing, our Sun Devils decided to pick on the Buffalo field goal holder?

All DieHard Sun Devil Fans should probably hold back on social media warrior efforts until just after midnight Friday night when unranked ASU will have just upset the 16th-ranked Cal Bears by seven points on the road, 31-24. ASU +5, O/U 40.5.

An incredible leader on and off the field, @kylewilliamsVI has been named a semifinalist for the 2019 William V. Campbell Trophy, announced by the @NFFNetwork this morning. https://t.co/z1aFQVrpOy